Harold "Burr" Davis (born c. 1937) was a Canadian football player who played for the Winnipeg Blue Bombers. He won the Grey Cup with them in 1959. [1] Delveaux played college football at the University of Houston where he won letters for his performance. [2] After his football career he coached at Klein High School and St. Thomas High School in Houston. [3] [4] 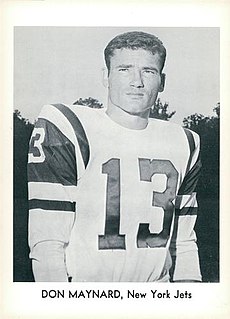 Elvin Lamont Bethea is a former American football defensive end who played his entire career with the Houston Oilers. He played for North Carolina A&T State University and was the first person from that school to be elected to the Pro Football Hall of Fame, having been inducted in 2003.

Tracy Quinton Rocker is an American football coach and former player who is the defensive line coach for the Philadelphia Eagles of the National Football League (NFL).

Joe Barry Carroll is an American former professional basketball player who spent ten seasons in the National Basketball Association (NBA). After retiring from basketball, he became a wealth advisor, philanthropist, artist, author of the memoir Growing Up... In Words and Images, and recipient of the Hank Aaron Champion for Justice award.

Artrell Hawkins, Jr. is a former American football player of the National Football League. He was drafted by the Cincinnati Bengals in the second round of the 1998 NFL Draft. He played college football at Cincinnati.

Patrick Stephen Hape is a former American football fullback and tight end for the Denver Broncos, Tampa Bay Buccaneers, and Houston Texans of the NFL.

J. Frank Dobie High School is a public secondary school located in Houston, Texas. Founded in 1968, it is named after the Texas writer of the same name. It houses grades 10-12. A Ninth Grade Center was opened recently to help with the influx of students. It is the largest school in the Pasadena Independent School District. The school mascots are the Longhorns and the official colors are orange and black, similar to that of the University of Texas at Austin.

Patrick Henry High School is a public high school located in the Grandin Court neighborhood of Roanoke, Virginia. It is one of the two general enrollment high schools for the Roanoke City Public Schools. The school is located on Grandin Road SW near the intersection with Brandon Avenue SW in the Raleigh Court neighborhood. 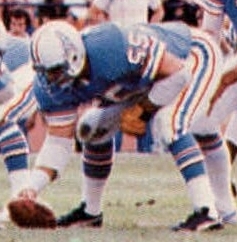 Carl Mauck is a former American football player and coach who was a center who played 13 seasons in the National Football League (NFL) for four teams and later served as an offensive line coach for several teams. Mauck attended Southern Illinois University.

Houston High School is a fully accredited public high school located in Germantown, Tennessee, serving students in grades 9–12. The school was previously one of eight high schools operating in the Shelby County School District. The principal is John Taylor. Houston Middle School and Riverdale Elementary (K-8) are the main feeder schools to Houston High since the creation of the Germantown Municipal School District in June 2014.

Clifton "Cliff" Washburn is a former professional athlete who played in the American National Football League, NFL Europe and United Football League as well as with the Canadian Football League. He was signed by the New York Giants as an undrafted free agent in 2003; he has also been a member of the Chicago Bears, Dallas Cowboys, Minnesota Vikings, Denver Broncos, Green Bay Packers, Houston Texans, Toronto Argonauts, Saskatchewan Roughriders, Edmonton Eskimos, Amsterdam Admirals, Hamburg Sea Devils, Frankfurt Galaxy and Las Vegas Locomotives. He played both football and basketball at The Citadel.

Paul Moss was a professional American football player who played wide receiver for two seasons for the Pittsburgh Pirates and the St. Louis Gunners.

Nathan Joel Coehoorn is a former Canadian football wide receiver who played his entire professional career for the Edmonton Eskimos of the Canadian Football League. After the 2010 CIS season, he was ranked as the seventh best player in the Canadian Football League’s Amateur Scouting Bureau rankings for players eligible in the 2011 CFL Draft, and third by players in the CIS. Coming out of college his top assets were speed, aggression and good hands. He was drafted fifth overall in the draft by the Eskimos and signed with the team on May 31, 2011. He played CIS football with the Calgary Dinos. On August 20, 2013 his contract was extended through the 2015 CFL season. 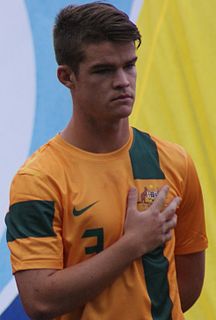 Connor Chapman is an Australian professional footballer who plays for Daejeon Hana Citizen. He has represented Australia at under-17, under-20, and under-23 level.

Matt Anthony was a Canadian football player who played for the Montreal Alouettes, Ottawa Rough Riders and Saskatchewan Roughriders. He won the Grey Cup with the Rough Riders in 1951. He was born in St. Catharines, Ontario and played junior football there for the St. Catharines Bulldogs prior to joining the Montreal Alouettes in 1946. Anthony later retired to Ottawa where he coached high school, junior and university football. He was also a businessman. Anthony died of cancer in 2000. Matt Anthony Field on the campus of the University of Ottawa, opened in 2001, is named in his honour.

Richard Cohee was a Canadian football player who played for the Hamilton Tiger-Cats, Montreal Alouettes, Ottawa Rough Riders, and Saskatchewan Roughriders. He won the Grey Cup with the Tiger-Cats in 1965 and 1967. He played college football at the Reedley College. Cohee died of cancer in 2013.

Pat Hughes is a Gaelic football player for Geevagh and Sligo. A former minor captain, Hughes started his senior career by winning the Man of the Match award on his first championship start in New York in May 2012.