Bussy-Saint-Georges (pronounced  [bysi sɛ̃ ʒɔʁʒ] ) is a commune in the eastern suburbs of Paris, France. It is located 25.5 km (15.8 miles) from the center of Paris, in the Seine-et-Marne department in the Île-de-France region in north-central France.

In the East, at the distance 30 kilometres (19 miles) from Paris and in the heart of Marne-la-Vallée, Bussy-Saint-Georges has a privileged position thanks to a high-density motorway network. From Bussy, the direct access to the A4 motorway and the nearby A104 offer easy access to the whole country.

The city centre is only 7 km (4.3 mi) away from Disneyland Paris.

, close to the TGV railway station of Chessy – Marne-la-Vallée and two international airports Roissy-Charles-de-Gaulle and Orly, the city has a central position in the transport network.

In Val-de-Bussy of Marne-la-Vallée, Bussy-Saint-Georges is from 1985 the leading and main support of the built-up area, as a real and independent new town (French : Ville nouvelle) with a unique status of local and new town. The others towns decided to be organized around a common agglomeration system of new towns.

The city has benefited from one of the largest growth rates in France. The population has multiplied by 56 in 30 years, between 1982 and 2012.

Bussy-Saint-Georges has a strong power of attraction on young families. 50% of the Buxangeorgiens are less than 30 years old.

Bussy-Saint-Georges has built its identity on a green model environment with parks and gardens. They represent 155 hectares of integrated green spaces, 9 kilometres (6 miles) of soft connecting links, ten squares and parks in the city centre, eight pools and more than 8,200 trees today.

In the origins, the village of Bussy appeared in 841 under the Roman name of Villa Buxido. In 855 the territory formed a large parish under the protection of Saint-Georges. Nevertheless, the full name of Bussy-Saint-Georges only appeared in the 13th century. The name of Bussy comes from Buscus because of the city's native environment initially composed of woods and many groves. In the Middle Ages, Bussy-Saint-Martin et Bussy-Saint-Georges was unified under a unique landlord authority, the lords of Bussy. Here is the list of the successive lords of Bussy:

In 1789, Bussy-Saint-Georges was under the authority of the Généralité of Paris.

During the 19th century, the town was in the county of Lagny, with a population from 500 to 550 inhabitants. Two ordinances, 6 June 1826 and 15 August 1827 reduced the territory of Bussy in favour of the territories of Ferrières and Jossigny.

Since 1985, Bussy-Saint-Georges has been integrated into the perimeter of the new town plan of Marne-la-Vallée and received a total of 180.50 hectares as additional territories coming from the nearest towns (Bussy-Saint-Martin, Collégien, Ferrières).

In July 2017, M. Hugues Rondeau, who has been the mayor from 1998 until 2014, was considered as guilty by French justice for illegal taking of interest and condemned to six months of suspended prison, payment of 60.000 euros for damage and interest, and ineligibility for five years. [4] In May 2019, he was banned from public service for life by the Court. [5]

Bussy-Saint-Georges is in the Canton of Torcy, in the administrative département of Seine-et-Marne; its prefecture is Melun. The canton brings together six towns and 38,236 inhabitants. Before its creation in 1975, the city of Bussy was in the Canton of Lagny-sur-Marne, finally divided in smaller new subdivisions considering the growth of population.

Canton of Torcy is now part of the arrondissement of Torcy created in 1993. The subprefecture was opened on 1 January 2006.

This arrondissement is the least geographically extended but the most populated of the department, with 10 cantons, 43 towns representing 343,583 inhabitants.

The town hall, built in 1850, stands in the old village, on the Place de la Mairie (Town hall square).

University of Marne-la-Vallée is the area university, and the vicinity has other post-secondary institutions. [7]

Within its territory, the city has an industrial region (Gustave Eiffel Park) located in the south of the city. Among the listed companies, there are Tech Data, SME Distribution (Sony), IBM, Air liquide, Asialand, BT France companies,... There are also a Senior Teaching Technical Book Center (Centre technique du livre de l'enseignement supérieur) and the Technical Center of the French National Library (Centre technique de la Bibliothèque nationale de France ). The city economic growth continues with the creation of new city planning areas or Zone d’Aménagement Concerté, such as the ZAC Léonardo-de-Vinci (30 hectares) or the Rucherie (80 hectares). But the debts of the town may be considered as huge. [8]

In the center of the city, there is the Bussy-Saint-Georges station of the RER line

. There is also a

All through the year, the city of Bussy-Saint-Georges offers to its inhabitants a large list of celebrations:

Bussy may refer to:

The following is a list of the 23 cantons of the Seine-et-Marne department, in France, following the French canton reorganisation which came into effect in March 2015: 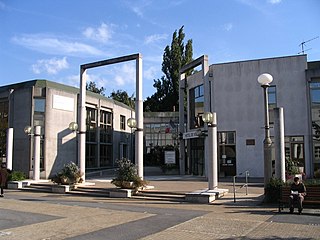 Torcy is a commune in the Seine-et-Marne department in the Île-de-France region in north-central France. It is located in the eastern suburbs of Paris, 21.8 km (13.5 mi) from the center of Paris.

RER A is one of the five lines in the Réseau Express Régional, a hybrid suburban commuter and rapid transit system serving Paris, France and its suburbs. The 108.5 km (67.4 mi) RER A line crosses the Paris region from east to west, with all trains serving a group of stations in central Paris, before branching out towards the ends of the line. 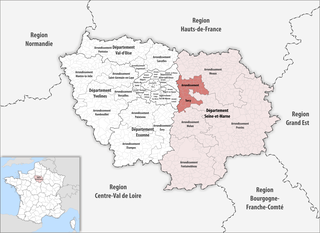 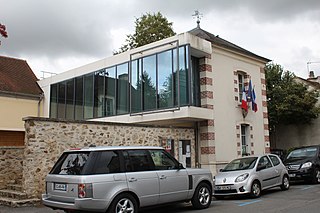 Chessy is a commune in the eastern suburbs of Paris, in the Seine-et-Marne department in the Île-de-France region in north-central France. It is located 30.6 km (19.0 mi) from the center of Paris.

Noisiel is a commune in the Seine-et-Marne department in the administrative region of Île-de-France, France. It is located in the eastern suburbs of Paris, 20.5 km (12.7 mi) from the center of Paris.

The canton of Torcy is a French administrative division, located in the arrondissement of Torcy, in the Seine-et-Marne département.

Croissy-Beaubourg is a French commune located in the Seine-et-Marne département, in the Île-de-France région.

Guermantes is a commune in the Seine-et-Marne department in the Île-de-France region in north-central France. It is located in the Val de Bussy sector of Marne-la-Vallée. As of 2012, its population was 1,191.

Saint-Thibault-des-Vignes is a commune in the Seine-et-Marne department in the Île-de-France region in north-central France.

The Communauté d'agglomération de Marne et Gondoire is a communauté d'agglomération, an intercommunal structure, part of the Marne-la-Vallée new town, in the eastern suburbs of Paris. It is located in the Seine-et-Marne department, in the Île-de-France region, northern France. It was created in December 2004. Its population was 95,968 in 2014. In July 2017, it was expanded with the communes Ferrières-en-Brie and Pontcarré. Its seat is in Bussy-Saint-Martin.

Torcy is a railway station in Torcy, Seine-et-Marne, a suburb east of Paris.

Lognes is a railway station on RER train network in Lognes, Seine-et-Marne. 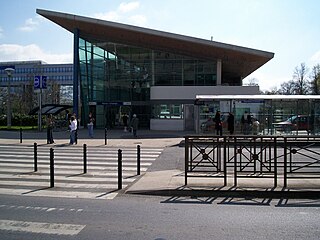 Noisy–Champs is a railway station on the RER train network at the border between Champs-sur-Marne, Seine-et-Marne and Noisy-le-Grand, Seine-Saint-Denis, France.

Noisiel is a railway station on RER train network in Noisiel, Seine-et-Marne.