Bydgoszcz Ignacy Jan Paderewski Airport( IATA : BZG, ICAO : EPBY) (Polish : Port lotniczy im. Ignacego Jana Paderewskiego Bydgoszcz-Szwederowo) is a Polish regional airport in the city of Bydgoszcz, Poland. It lies only 3.5 km (2.2 mi) [2] from the city centre and around 50 km from the city of Toruń. It is the eleventh largest airport in Poland in terms of passenger traffic. The airport served 413,245 passengers in 2018. It features one passenger terminal and four runways, the main being 08/26 which is 2,500 m × 60 m (8,202 ft × 197 ft). [3] 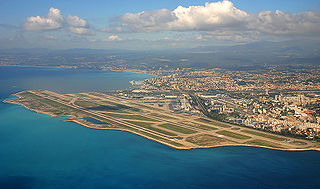 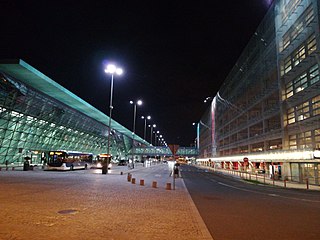 Kraków John Paul II International Airport is an international airport located near Kraków, in the village of Balice, 11 km (6.8 mi) west of the city centre, in southern Poland. It is the second busiest airport of the country in terms of the volume of passengers served annually.

Warsaw Chopin Airport is an international airport in the Włochy district of Warsaw, Poland. It is Poland's busiest airport with 18.9 million passengers in 2019, thus handling approximately 40% of the country's total air passenger traffic. The airport is a central hub for LOT Polish Airlines as well as a base for Nordica and Wizz Air. 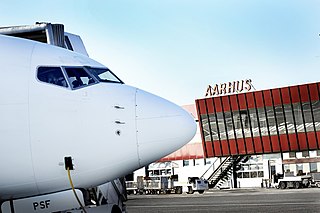 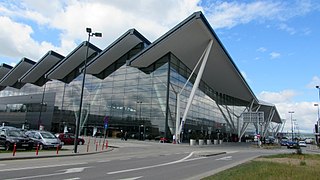 Gdańsk Lech Wałęsa Airport is an international airport located 12 km (7.5 mi) northwest of Gdańsk, Poland, not far from the city centres of the Tricity metropolitan area: Gdańsk, Sopot and Gdynia. Since 2004 the airport has been named after Lech Wałęsa, the former Polish president. With around 5.4 million passengers served in 2019, it is the 3rd largest airport in Poland in terms of passenger traffic. 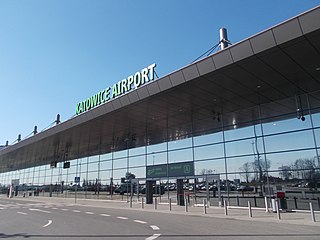 Katowice Wojciech Korfanty Airport is an international airport, located in Pyrzowice, 30 km (19 mi) north of Katowice, Poland. The airport has the 4th-biggest annual passenger flow in Poland. Katowice Airport is the biggest Polish airport in terms of leisure traffic. It is also the second biggest airport in the country in terms of cargo traffic. It operates a variety of charter, regular and cargo flights. Long-haul flights are operated from Katowice to Cancún in Mexico, Malé in Maldives and to Puerto Plata as well as Punta Cana in Dominican Republic by LOT's Boeing 787s Dreamliner. The airport has the tallest Air Traffic Control Tower and the second longest runway in Poland. Katowice Airport is the Poland's only airport with more than one passenger terminal and the airport with the biggest number of based airlines. The Katowice Airport serves the most industrialised region in Poland, one of the most urbanised areas of Europe. 13 million inhabitants are estimated to live within 100 km of Katowice Airport. This is a larger catchment area than many airports in Europe.

Copernicus Airport Wrocław is an international commercial airport in Wrocław in Lower Silesian Voivodeship in southwestern Poland. The airport is located 10 km (6.2 mi) southwest of the city centre, at Graniczna street 190. It has one runway, one passenger terminal, one cargo terminal and one general aviation terminal. Wrocław airport is also often used by Polish Air Force and US Air Force.

Poznań–Ławica Henryk Wieniawski Airport, built in 1913, is one of the oldest airports in Poland. It is located 5 km (3.1 mi) west of Poznań city centre. It takes its name from the neighborhood of Ławica, part of the city's Grunwald district, while the airport actually lies in the Jeżyce district. 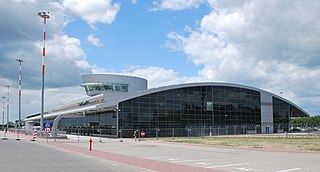 Lodz Airport Central Poland, formerly known as Łódź-Lublinek Airport, is a regional airport in central Poland, located approximately 6 km (3.7 mi) southwest of Łódź city center. Łódź ranked 8th among Polish airports in 2013 in passenger numbers. The airport has been in operation since 13 September 1925 and has recently undergone a number of upgrades, enabling it to handle services by low cost airlines to destinations in Europe.

Solidarity Szczecin–Goleniów Airport is the main domestic and international airport serving the city of Szczecin in Poland and is located 45 km (28 mi) northeast of the city, near the town of Goleniów, in the village of Glewice. About 1.6 million residents live within its catchment area. 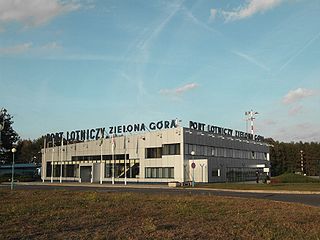 Zielona Góra Airport is a regional airport located within the greater Zielona Góra agglomeration in western Poland. It lies 10 km (6.2 mi) from Sulechów, or 35 km (22 mi) northeast of the Zielona Góra city centre.

Rzeszów–Jasionka Airport is an international airport located in southeastern Poland, in Jasionka, a village 10 km (6.2 mi) from the center of the city of Rzeszów. It is the eighth-busiest airport in Poland and currently the smallest European airport which has a direct scheduled transatlantic connection, with LOT Polish Airlines' seasonal service to Newark. 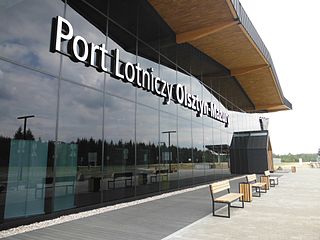 Olsztyn-Mazury Airport is an international passenger airport in the North-East of Poland, branded as the gateway to the Masurian Lake District. It is located near Szymany, some 10 km from the centre of Szczytno in the Warmian-Masurian Voivodeship. The airport was previously known as Szymany Airport or Szczytno-Szymany Airport. 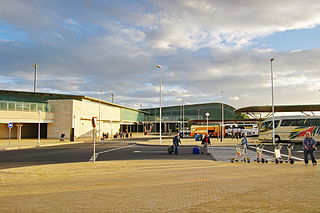 Fuerteventura Airport, also known as El Matorral Airport, is an airport serving the Spanish island of Fuerteventura. It is situated in El Matorral, 5 km (3.1 mi) southwest of the capital city Puerto del Rosario. The airport has flight connections to over 80 destinations worldwide, and over 5.6 million passengers passed through it in 2016.

Warsaw Modlin Airport is an international airport, formerly a military airbase. Originally opened by Germany in 1940 as an airbase after the invasion of Poland, after the German capitulation in 1945 the airport was transferred over to Soviet/Polish control. The airbase closed in 2000 as it was deemed unsafe for any further operations, before eventually being overhauled and repurposed as a commercial airport. It is located 40 km north of Warsaw's city centre in Nowy Dwór Mazowiecki and has a maximum capacity of approx. 2-2.3 million passengers a year. The airport is intended to be used by low-cost carriers serving Warsaw, the capital of Poland. As of 2017, the airport is the fifth busiest airport in Poland, with 2,932,639 passengers currently exclusively served by Ryanair, however as of late the airport is slowly opening up to other airlines, such as the local Warsaw-based Enter Air, however for now only operating seasonal services. The main international airport of the city, however, is Warsaw Chopin Airport.

SprintAir S.A. is a Polish airline headquartered in Warsaw and based at Warsaw Frederic Chopin Airport. It operates cargo services and passenger charter flights.

Lublin Airport is an airport in Poland serving Lublin and the surrounding region. The site is located about 10 km (6.2 miles) east of central Lublin, adjacent to the town of Świdnik. The airport has a 2520 × m runway (8,270 × 200 ft), and the terminal facilities are capable of handling 4 Boeing 737-800 class aircraft simultaneously. Construction began in the fall of 2010 and the official opening took place on December 17, 2012. The new airport replaced the grass airstrip, which had served the PZL-Świdnik helicopter factory, and was known as Świdnik Airport with the ICAO identifier EPSW. 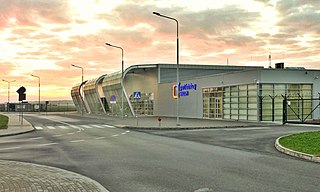 Warsaw Radom Airport, also known as Radom-Sadków Airport is a civil and military airport in central Poland, located approximately 3 km (1.9 mi) east of Radom city center. The name "Sadków" comes from the suburb of Radom in which the airport is located. The airport has been in operation since the 1920s. The airport has one 2000x45m (6,562x147,6 ft) runway. The middle section is asphalt concrete, with 200m and 230m end sections of concrete. Taxiways are 14 meters wide and were renovated in the year 2000.