César Chávez Park is a 90 acres (36 ha) city park of Berkeley, California named after César Chávez. [1] It can be found on the peninsula on the north side of the Berkeley Marina in the San Francisco Bay and is adjacent to Eastshore State Park.

The park's east position in San Francisco Bay provides panoramic views of San Francisco, the Golden Gate Bridge, the Marin Headlands, and the east bay hills. The park's terrain is characterized by very open grassy hills that have become popular for kite flying. [2] Paved paths run the perimeter and throughout the park where picnic tables and barbecue grills are available to the public.

The park began as a landfill dating back to 1957, when dikes were constructed for the purpose of containing municipal waste. In 1969, the city adopted the Marina Master Plan, which set aside the landfill area for unstructured recreation. In 1991 the city completely sealed the landfill and the park opened soon thereafter, originally as North Waterfront Park. In 1996, the city renamed the park after César E. Chávez, union leader and founder of the United Farm Workers of America. [1]

Popular activities include model rocket launching, kite flying, drone and model airplane flying, picnicking, dog walking, jogging and walking. Although on a peninsula, the park has no access to the water because there are no beaches nor steps down through the park's reinforced shoreline. [1] 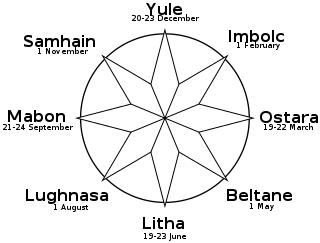 The Wheel of the Year is an annual cycle of seasonal festivals, observed by many modern Pagans, consisting of the year's chief solar events and the midpoints between them. While names for each festival vary among diverse pagan traditions, syncretic treatments often refer to the four solar events as "quarter days" and the four midpoint events as "cross-quarter days", particularly in Wicca. Differing sects of modern Paganism also vary regarding the precise timing of each celebration, based on distinctions such as lunar phase and geographic hemisphere.

Makara Sankranti or Maghi, is a festival day in the Hindu calendar, dedicated to the deity Surya (sun). It is observed each year in the lunar month of Magha which corresponds with the month of January as per the Gregorian calendar and is a day the people of India and Nepal celebrate their harvest. It marks the first day of the sun's transit into Makara rashi (Capricorn), marking the end of the month with the winter solstice and the start of longer days. 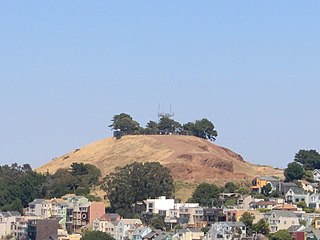 The Wave Organ is a sculpture constructed on the shore of San Francisco Bay in May 1986 by the Exploratorium, and more specifically, by Exploratorium artist in residence Peter Richards, who conceived and designed the organ, working with sculptor and mason George Gonzales.

The 49-Mile Scenic Drive is a designated scenic road tour highlighting much of San Francisco, California. It was created in 1938 by the San Francisco Down Town Association to showcase the city's major attractions and natural beauty during the 1939 Golden Gate International Exposition.

The San Jose Holiday Parade is in San Jose, California. The parade is considered one of the "Top 25 Parades in America". Celebrities and famous locals appear as Grand Marshals and numerous bands from across America are invited to participate in the parade.

The Marina District is a neighborhood located in San Francisco, California. The neighborhood sits on the site of the 1915 Panama–Pacific International Exposition, staged after the 1906 San Francisco earthquake to celebrate the reemergence of the city. Aside from the Palace of Fine Arts (POFA), all other buildings were demolished to make the current neighborhood. The Marina currently has the highest non-Hispanic white resident percentage of any recognized neighborhood in San Francisco.

Lafayette Park is an 11.49 acres (4.65 ha) park in San Francisco, California, United States. Originally created in 1936, it is located in the neighborhood of Pacific Heights between the streets of Washington, Sacramento, Gough, and Laguna. Located on a hill, the park offers views of many areas, including the city's Marina district, Alcatraz Island and the San Francisco Bay, Buena Vista Park, and Twin Peaks. In addition to both open and treed green spaces, the park includes two tennis courts, a children's playground, an off-leash dog area, restroom facilities, and a picnic area. 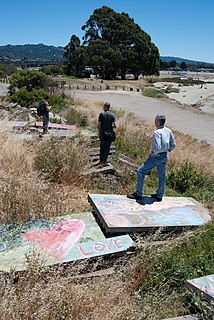 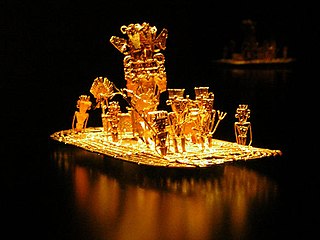 This article describes the astronomy of the Muisca. The Muisca, one of the four advanced civilisations in the Americas before the Spanish conquest of the Muisca, had a thorough understanding of astronomy, as evidenced by their architecture and calendar, important in their agriculture.