CCIR (or FCC) System M, sometimes called 525 line, is the analog broadcast television system used in the United States since July 1, 1941, and also in most of the Americas and Caribbean, South Korea, and Taiwan. Japan uses System J, which is nearly identical to System M. The systems were given their letter designations in the ITU identification scheme adopted in Stockholm in 1961. Both System M and System J display 525 lines of video at 30 frames per second using 6 MHz spacing between channel numbers, and is used for both VHF and UHF channels.

Currently (as of 2015), Systems M and J are being replaced by digital broadcasting in countries such as the Americas, Japan, South Korea, Taiwan and the Philippines.

Strictly speaking, System M does not designate how color is transmitted. However, in nearly every System M country, NTSC is used for color television, a combination called NTSC-M, but usually referred to more recently as simply "NTSC" because of the relative lack of importance of black-and-white television. In NTSC-M and Japan's NTSC-J, the frame rate is offset slightly, becoming ​30⁄1.001 frames per second, usually labeled as the rounded number 29.97.

The main exception to NTSC is Brazil, where PAL color is used instead, resulting in the PAL-M combination unique to that country, which is monochrome-compatible with other System M countries, but not compatible with other PAL countries, which use different basic systems as their base. PAL-M signals are at 30 frames per second instead of slowing down to 29.97 like NTSC. 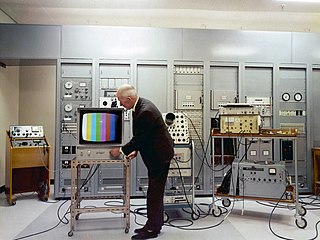 NTSC-J was the analog television system and video display standard for the region of Japan that ceased operations in 44 of the country's 47 prefectures on July 24, 2011. Analog broadcasting ended on March 31, 2012 in the three prefectures devastated by the 2011 Tōhoku earthquake and tsunami.

1080i is an abbreviation referring to a combination of frame resolution and scan type, used in high-definition television (HDTV) and high-definition video. The number "1080" refers to the number of horizontal lines on the screen. The "i" is an abbreviation for "interlaced"; this indicates that only the odd lines, then the even lines of each frame are drawn alternately, so that only half the number of actual image frames are used to produce video. A related display resolution is 1080p, which also has 1080 lines of resolution; the "p" refers to progressive scan, which indicates that the lines of resolution for each frame are "drawn" on the screen in sequence.

480i is a shorthand name for the video mode used for standard-definition analog or digital television in the Caribbean, Myanmar, Japan, South Korea, Taiwan, Philippines, Laos, Western Sahara, and most of the Americas. The 480 identifies a vertical resolution of 480 lines, and the i identifies it as an interlaced resolution. The field rate, which is 60 Hz, is sometimes included when identifying the video mode, i.e. 480i60; another notation, endorsed by both the International Telecommunication Union in BT.601 and SMPTE in SMPTE 259M, includes the frame rate, as in 480i/30. The other common standard, used in the other parts of the world, is 576i.

A field-sequential color system (FSC) is a color television system in which the primary color information is transmitted in successive images and which relies on the human vision system to fuse the successive images into a color picture. One field-sequential system was developed by Dr. Peter Goldmark for CBS, which was its sole user in commercial broadcasting. It was first demonstrated to the press on September 4, 1940, and first shown to the general public on January 12, 1950. The Federal Communications Commission adopted it on October 11, 1950, as the standard for color television in the United States, but it was later withdrawn.