In early June 2020, complete lockdowns were introduced in major cities, including the capital Baku, effective from June 5 to June 8. [3]

The case fatality ratio for COVID-19 has been much lower than SARS of 2003, [6] [7] but the transmission has been significantly greater, with a significant total death toll. [8] [6] Model-based simulations suggest that the 95% confidence interval for the time-varying reproduction number R t was lower than 1.0 in July and August but higher than 1.0 in October and November 2020. [9]

Some critics of the government have been arrested for allegedly spreading false information about the COVID-19 pandemic. [68]

Azerbaijan has donated US$5 million to WHO, US$5 million to Iran, medical supplies to Xian City and Mianyang of China, and sent humanitarian aid to Bosnia and Herzegovina to support their fight against the COVID-19 pandemic. [90] [91] [92] [93]

In addition to financial, humanitarian and medical donations to other countries and organizations, Azerbaijan has also shown its solidarity with the nations fighting against the COVID-19 pandemic by illuminating the Heydar Aliyev Center with the colors of the flags of the countries affected by COVID-19. The process started on April 3, 2020 with the Chinese flag and then the flags of France, Germany, Iran, Italy, Russia, Spain, Turkey, the UK, the USA, Georgia, the EU, and the WHO were projected daily onto the building of HAC designed by designer Zaha Hadid. [94]

"Azərbaycan marşı" is the national anthem of Azerbaijan. The music was composed by Uzeyir Hajibeyov, with lyrics by poet Ahmad Javad. The government officially adopted the anthem in 1920 with the passage of the decree, "On the State Hymn of the Republic of Azerbaijan." In 1992, after the fall of the Soviet Union, Azerbaijan's government officially restored "Azərbaycan Marşı" as the national anthem. 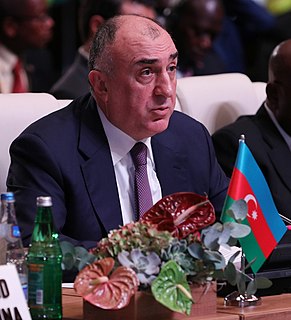 Elmar Maharram oglu Mammadyarov, born July 2, 1960) is an Azerbaijani diplomat who served as Minister of Foreign Affairs of Azerbaijan between 7 April 2004 and 16 July 2020. Mammadyarov speaks Russian, English, Azerbaijani, and Turkish. 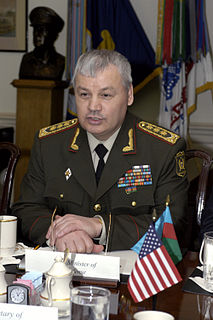 Colonel General Safar Akhundbala oglu Abiyev was the Minister of Defense of Azerbaijan from 1995 to 2013. He was considered one of the longest serving defense ministers in the Commonwealth of Independent States.

The Ministry of Culture of Azerbaijan Republic is a governmental agency within the Cabinet of Azerbaijan in charge of regulation of the activities and promotion of Azerbaijani culture. The ministry is headed by Anar Karimov.

Ramiz Anvar oglu Mehdiyev is an Azerbaijani politician and academician who is the current President of the National Academy of Sciences of Azerbaijan and who served as the Head of the Presidential Administration of Azerbaijan from 1994 to 2019.

The National Archive Department of the Republic of Azerbaijan is a governmental agency within the Cabinet of Azerbaijan in charge of managing, maintaining, protecting and updating national archives of Azerbaijan. The agency is headed by Atakhan Pashayev. 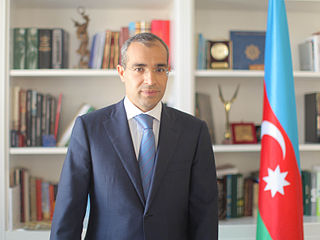 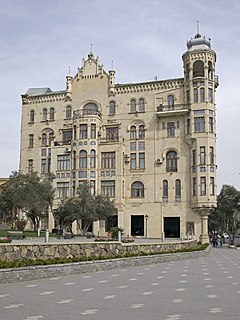 Isa bek Hajinski House or the House of Hajinski is located near the Maiden's Tower in Sabail, Baku. It survived a period of rapid prosperity, met with the aggressive fury of the Dashnaks and Bolsheviks, endured total nationalisation, and has absorbed the whole turbulent history of the past century.

Fuad Alasgarov (Azerbaijani: Fuad Murtuz oğlu Ələsgərov; May 14, 1959), also spelled as Fuad Aleskerov, is the Assistant to the President for Work with Law Enforcement Bodies and Military Issues, Head of Department and has the rank of first degree state adviser. 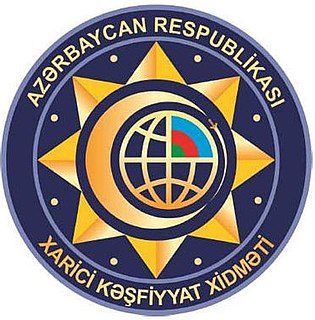 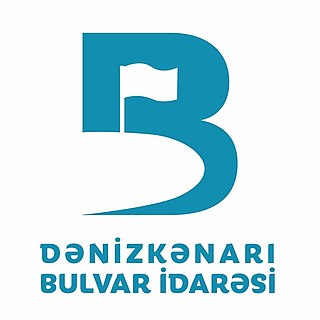 Seaside Boulevard Office is a public entity in the area of protection of the National Park, State Flag Square, State Flag Museum, control over maintenance and territory.

State Agency for Compulsory Health Insurance under the cabinet of Azerbaijan is a legal entity that provides the implementation of mandatory medical insurance, accumulating funds to finance medical services within the basic package in Azerbaijan.

Azerbaijan Investment Holding (Azerbaijani: Azərbaycan İnvestisiya Holdinqi is a public legal entity that carries out activities in the field of management of state-owned companies and enterprises, economic enterprises with a state share of participation based on common principles. 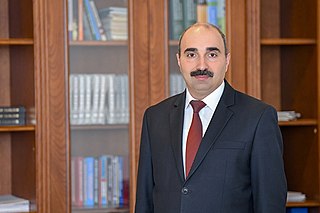