It was founded in 1945 as Karres Mediaș and currently plays in the Liga I, the highest level of the Romanian football league system.

The club was founded in 1945 under the name of Karres Mediaș and participated in the Romanian Second League (Liga II). The team achieved promotion to the Divizia A in 1947, club's name was changed to CSM Mediaș in the same year. At the end of the season, the team managed to secure a comfortable 11th place out of 16, in its first Divizia A season. Financial troubles and inadequate training conditions plagued the club's second Liga I season (1948–1949). After the second round, disgruntled players complaint to the press and the Romanian Football Federation (FRF) about the poor training conditions at the club. FRF decided to allow the factory Zorile Roșii (Red Dawn) to take the ownership of the club. The name of the team was also changed to Zorile Roșii Mediaș. Later that season the team merged with Vitrometan Mediaș. The second half of the season brought another change in ownership, also the most recent in the club's history, when it was taken over by Ateliere Gaz Metan and the name was changed to Gaz Metan Mediaș. The team relegated to Liga II the same season. The 1948–49 team was formed by Kodacek – Sulyak, Szobo – Șerban, Molnar, Rășinaru – Pop, Coman, Guța, Szabo, Pologea. [1]

Returned to a Divizia B with only 2 series, instead of 3, as it was before, Gaz Metan resumed its safe evolutions with a meritorious 7th place in the first season, 11th place in the second one and with a 4th place at the end of the 1995–96 season, best rank in the last over 20 years for the team from Mediaș. Next season Gaz Metan would become from a respected team, a feared one, because it ended on the podium (3rd place) starting to announce its serious intentions to return in the first league of the Romanian football. [5] This season was followed by two seasons of hard battle with the following results: 1997–98 – 5th and 1998–99 – 4th.

The first year of the 21st century has brought a great success for the black and whites, the promotion to Divizia A after no less than 51 years after the last presence in the first league. Led by the coach Jean Gavrilă, Gaz Metan secured promotion to 1999–2000 Divizia A with an 11 points advance of the second place, occupied by ARO Câmpulung. The squad that achieved that historical promotion was composed of: GK: Filip, Roșca – DF: Ciurar, Grigore, Grasu, Lungu, Șomfălean, Vasile -MF: Zotincă, Boroncoi, Callo, Hanc, Ioan, Moldovan, Pătru, Stoica – FW: Vitan, Boloban, Boaru, Găldean, Șomfălean. [6] 51 years of absence were too much and the shock of the first league level has hit hard in the morale of the team, the joy of promotion was quitting fast and gaziștii finished on the last place (16th) with a disastrous ranking line, only 3 victories, 9 draws and 18 defeats, 21 goals scored and 42 conceded, in total 18 points, with 16 less than 15th place, occupied at that time by Rocar București.

2001–02 season was finding the team back in the second league, with morale to the ground and trying to rebuild a competitive team, Gaz Metan finished only on 12th place. With the start of the 2002–03 season the club was again in the fight for promotion, but finally resembled with a 3rd place, first under the promotion places, occupied by Apulum Alba Iulia and FC Oradea. For the supporters things seemed clear, Gaz Metan had returned to its status as a Divizia B team, only now it seemed a team decided to fight for promotion than a mid-rank team. In the following season, the results were: 2003–04 – 4th, 2004–05 – 2nd, 2005–06 – 4th and 2006–07 – 6th with the statement that in 2005 the team missed the promotion in the last minute after finishing at the same number of points (65) with Jiul Petroșani.

In 2008 led by coach Cristian Pustai, a former Gaz Metan player, the team secured promotion to Liga I from second spot after a hard fight and promoted to Liga I, 8 years away from the last presence, team: Ștețca  – Grillo, Lazăr, Zaharia, Buzean  – Dudiță, Eric, Hoban, Curtean  – Boaru, C.Prodan. [7] The team finished the 2008–09 season on 15th position out of 18 teams, the last spot leading to relegation. Following the corruption scandal involving FC Argeș Pitești and the subsequent relegation of the team in Liga II, Gaz Metan remained in the first league. 2009–10 season was finished on the 10th place, far away from the relegation zone, providing a new record for the club, 3 consecutive seasons in the Liga I.

The white and blacks finished 7th in the 2010–11 season and secured a UEFA Europa League participation for the following season, its first in history. Gaz Metan reached the 2011–12 UEFA Europa League play-off round by eliminating KuPS of Finland (Agg. 2–1) in the second round and Mainz of Germany (Agg. 4–3 pen.) in the third round. Gaz Metan lost in the play-offs to Austria Wien (Agg. 2–3). Domestically, Gaz Metan reached the Romanian Cup semi-finals in the 2011–12 season but was eliminated (Agg. 2–2 away goals) by the future cup winner Dinamo București and finished on 13th place in the league. In the next two seasons, the team consolidates its first league-team status through the following results: 2012–13 – 10th and 2013–14 – 13th.

2014–15 season has brought major changes to the first league competitive system by reducing the number of teams from 18 to 14, leading to the relegation of 6 teams. Lupii negri finished on the 13th place, first under the relegation line and returned to Liga II after 7 consecutive years in the first league, longest run for the club, with the best performance in club's history (7th place) and with the first participation in the European competitions.

Gaz Metan has once again proved to be an ambitious team and promoted back after only one season in the second league, 2015–16 team: Greab  – Romeo, Cristea, Zaharia, Buzean  – P.Iacob, Danci  – Munteanu, Bic, Petre  – Gavra. [8] 2016–17 season was a tumultuous one for the team from Mediaș which finished the regular season on the 7th place, at only 2 points distance from a play-off place and qualified for the play-out round, when it finished on 2nd place (8th in the general ranking). The club also encountered serious financial problems choosing to go into insolvency. [9]

In the summer of 2017 the club has approached a low-budget strategy and after 22 rounds played in the 2017–18 season, the club is on 12th place, just above the relegation zone, but with the same number of points as the team from the 13th place, the first place situated in the red zone.

Gaz Metan plays its home games on the Municipal Gaz Metan Stadium. The stadium has a capacity of 8000 seats with half of the seats covered; playing surface with under-soil heating and a 1500 lux floodlights system. The stadium is homologated to host preliminary rounds of any UEFA club competitions as well as U21 international games.

The stadium underwent major renovations and expansions in 2010. The playing surface was replaced in its entirety and covered stands were built on the opposite side of the main stands, increasing the stadium's capacity to 7,814 seats.

Gaz Metan has many supporters in Mediaș and especially in Sibiu County. The ultras groups of Gaz Metan Mediaș are known as Lupii Negri (The Black Wolves) and Commando Mediensis. [10]

The most important rivalries overtime for Gaz Metan were against football clubs from Sibiu whether they were: Șoimii Sibiu, Inter Sibiu, FC Sibiu or Voința Sibiu. Now the team that represents Sibiu is FC Hermannstadt and the two clubs met for the first time on 17 April 2018, in a Romanian Cup semi-final, in front of many fans.

Other players under contract

The footballers enlisted below have had international cap(s) for their respective countries at junior and/or senior level and/or more than 100 caps for CS Gaz Metan Mediaș.

Fotbal Club Universitatea Cluj, commonly known as Universitatea Cluj or simply as U Cluj, is a Romanian professional football club based in the city of Cluj-Napoca, Cluj County. Founded in 1919 by Iuliu Hațieganu, the team currently plays in the Liga II, the second tier of the Romanian football league system.

Clubul Sportiv Municipal Jiul Petroșani, commonly known as Jiul Petroșani, or simply as Jiul, is a Romanian amateur football club based in Petroșani, Hunedoara County, founded in 1919 under the name of CAM Petroșani.

Fotbal Club Botoșani, commonly known as FC Botoșani, is a Romanian professional football club in Botoșani, Romania, that competes in the Liga I.

Alexandru Curtean is a Romanian footballer who plays as a midfielder for Viitorul Șelimbăr.

The 2006–07 Liga II was the 67th season of the second tier of the Romanian football league system. The name of the leagues in Romania was changed started with this season..

The 2005–06 Divizia B was the 66th season of the second tier of the Romanian football league system.

The 2001–02 Divizia B was the 62nd season of the second tier of the Romanian football league system. 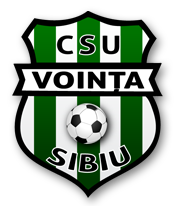 The 2013–14 Liga Națională season was the 64th season of the Liga Națională, the highest professional basketball league in Romania.

The 1951 Cupa României Final was the 14th final of Romania's most prestigious football cup competition. It was disputed between CCA București and Flacăra Mediaş, and was won by CCA București after a game with 4 goals. It was the third cup title in the history of CCA București.

Asociația Fotbal Club Hermannstadt, commonly known as FC Hermannstadt, Hermannstadt or familiarly as Sibiu, is a Romanian professional football club based in the city of Sibiu, Sibiu County, currently playing in the Liga I.

The 2018–19 Liga I was the 101st season of the Liga I, the top professional league for Romanian association football clubs. The season began on 20 July 2018 and ended on 2 June 2019, being the fourth to take place since the play-off/play-out rule has been introduced.

The 2010–11 season was Bihor Oradea's 52nd season in the Romanian football league system, and their 32nd season in the Liga II. At the end of the season the team finished on 2nd place and promoted to Liga I after 8 years, but they were denied a licence for Liga I because of the debts.

Alexandru Pelici is a Romanian former professional footballer and currently a manager.

The 1960–61 Divizia B was the 21st season of the second tier of the Romanian football league system.