Cabeza del Caballo is a village and municipality in the province of Salamanca, western Spain, part of the autonomous community of Castile-Leon. It is 90 kilometres (56 mi) from the provincial capital city of Salamanca and has a population of 338 people. [1] 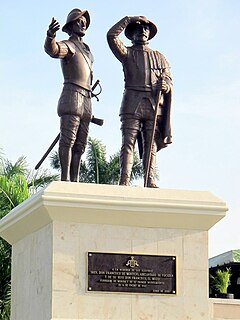 Bóveda del Río Almar is a village and municipality in the province of Salamanca, western Spain, part of the autonomous community of Castile-Leon. It is 45 kilometres (28 mi) from the provincial capital city of Salamanca and as of 2016 has a population of 245 people.

Gejuelo del Barro is a sparsely populated village and municipality in the province of Salamanca, western Spain, part of the autonomous community of Castile-Leon. It is located 45 kilometres (28 mi) from the provincial capital city of Salamanca and has a population of only 41 people.

La Cabeza de Béjar is a mountainous village and municipality in the province of Salamanca, western Spain, part of the autonomous community of Castile and León. It is located 55 kilometres (34 mi) from the provincial capital city of Salamanca and has a population of 93 people.

The 2008–09 Copa del Rey was the 107th staging of the Copa del Rey. The competition started on 23 August 2008 and concluded on 13 May 2009 with the final, held at the Mestalla Stadium in Valencia, in which Barcelona lifted the trophy for the 25th time in their history with a 4–1 victory over Athletic Bilbao, who qualified for the third qualifying round of the 2009–10 UEFA Europa League. The defending cup holders were Valencia, but they were eliminated in the quarter-finals. 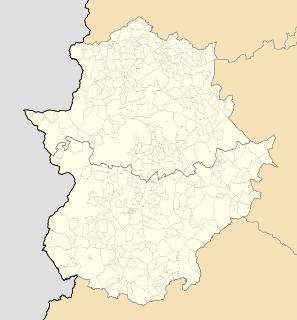 Cabeza del Buey is a Spanish municipality in the province of Badajoz, Extremadura. According to the 2014 census, the municipality has a population of 5,234 inhabitants.

The Retuertas horse, Spanish: 'Caballo de las Retuertas' or Caballo de las Retuertas de Doñana, is a rare breed of horse indigenous to the Andalusia region of Spain. It is said to closely resemble the ancient Iberian horses that populated Spain before being domesticated. It is now found only in the Doñana National Park in the provinces of Huelva and Sevilla, and in Campanarios de Azaba Biological Reserve in Espeja a part of which is the research reserve of the Consejo Superior de Investigaciones Científicas, the Spanish National Research Council. According to a genetic study by the CSIC, the Retuertas horse is one of the oldest European breeds., dating to 3000 years BP, and the only one living in the wild and isolated from other populations.

The Basque Mountain Horse is a breed of horse from the Basque Country of Spain and France. It is listed in the Catálogo Oficial de Razas de Ganado de España, the official catalogue of livestock breeds of Spain, in the group of autochthonous breeds in danger of extinction. The original breed standard of the "Euskal Herriko Mendiko Zaldia / Caballo de Monte del País Vasco", officially approved on 21 July 1999 and published in the Boletín Oficial del País Vasco, the official bulletin of the Basque Country, was repealed in 2015 and replaced with a new one.

Sierra de Caballos or Sierra de los Caballos is a mountain range in the Maestrazgo and Bajo Aragón comarcas of Aragon, Teruel Province, Spain. The highest point in the range is Las Artigas (1,205 m). The Guadalopillo River flows along the northern side of the range.

"Caballo sin Nombre" is the second episode of the third season of the American television drama series Breaking Bad, and the 22nd overall episode of the series. Written by Peter Gould and directed by Adam Bernstein, it aired on AMC in the United States and Canada on March 28, 2010.

Alonso del Castillo Maldonado was an early Spanish explorer in the Americas. He was one of the last four survivors of the Pánfilo de Narváez expedition, along with Álvar Núñez Cabeza de Vaca, Andrés Dorantes de Carranza and his African slave Estevanico. They were the early non-native people to travel and be enslaved in the Southwest region of the modern United States. Castillo Maldonado lived with a Native American tribe in Texas in 1527 and 1528. 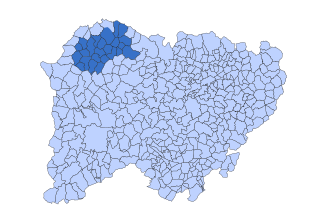 Diego Caballo Alonso is a Spanish professional footballer who plays for Albacete Balompié as a left back.