Cadolzburg (outdated also Kadolzburg, colloquially pronounced "Kalschbuʳch" or "Sporch" [ ʃbɔrχ]) is a municipality in the Middle Franconian district of Fürth, in Bavaria, Germany. It is situated 11 km (6.8 mi) west of Fürth. Its name derives from its central castle, first being mentioned in the year 1157. [3]

The topography varies significantly in its height.

Neighboring Municipalities are: (beginning in the north then going clockwise)

Cadolzburg consists of the city itself and 15 farther districts: [4]

The place was first mentioned in 1157 when the reeve of Kadolzburg, Helmericus de Kadoldesburc, agreed on a territorial exchange between the diocese of Würzburg the Heilsbronn Abbey. So the name derives from Burg des Kadold meaning "Kadold's castle". If the castle had been built by Duke Kadold, who in the year 793 founded the Herrieden Abbey, it would be an early medieval citadel from the 8th century. More likely, however, seems that it was erected by the allodium of the Abenbergers. [3] The earliest erected parts surviving until today were built around 1250 under the rule of the Hohenzollern, Conrad I. the Burgraves of Nuremberg and his son Fredrick III., as they took residence there. In the year 1397 Fredrick VI. was given all the land "under the mountains" (untergebirgisch) including the residence of Cadolzburg, but merely 20 years later he was gifted the Margraviate of Brandenburg and the title Elector of Brandenburg, his dynasty would later on become Emperors of Germany. Under the reign of his son Albrecht Achilles of Brandenburg Cadolzburg was used as a residence for hunting. In the 14th century the spelling "Cadelspurgk" became common and appeared in various documents form the free imperial city of Nuremberg. It formed part of the Margraviate of Ansbach and thus was part of the Franconian Circle since 1500.

In the late 18th century there were about 120 households in Cadolzburg. The jurisdiction and municipal power were possessed by the brandenburg-ansbach Office Cadolzburg. The landowner was the Kastenamt Cadolzburg, consisting of the castle, a brewhouse, 2 smitheries, one bakery, 2 pubs, 105 houses, 2 halffarms, 1 brick production, and the parish of Cadolzburg (possessing two farms). [5]

In the municipality edict of 1808 the tax district of Cadolzburg was established, the Municipaldistrict of Cadolzburg followed suit in 1810, being superimposable with the tax district. They were subjects in administration and jurisdiction to the Landgericht Cadolzburg and in financial administration to the Rentamt  [ bar; de; es ] Cadolzburg (restyled Finanzamt Cadolzburg in 1920). It was classified as a Markt with a Magistrate of third class in 1818. [6] Since 1862 Cadolzburg was administrated by the Bezirksamt Fürth (restyled Landkreis Fürth in 1938), but the jurisdiction was left to the Landgericht Cadolzburg until 1879, from 1880 to the first of March 1931 it was given to the Amtsgericht Cadolzburg and since then, the Amtsgericht Fürth is the ordinary court. The financial administration was taken over by the Finanzamt Fürth on 1 January 1929. In 1961 the municipality had an extension of 4,486 km². [7]

Incorporations into the municipality

First of January 1972 most parts of the municipality of Deberndorf and on July first the former Municipality of Roßendorf were incorporated into Cadolzburg. [6] 1. May 1978 Steinbach and the district of Seckendorf of the dissolved Municipality of Horbach followed. [8]

In the year 2007 Cadolzburg celebrated its 850th anniversary.

The building to be seen nowadays is from the 13th to 18th century, it used to be one of the residences of the Hohenzollern dynasty as burgraves of Nuremberg. Frederick I. of Brandenburg rebuilt it entirely, and later died there in 1440. For the church dedicated to St. Cecilia he donated the altar (1420/25), on which he is depicted together with his wife Elisabeth of Bavaria-Landshut in the middle part, right under the crucifixion scene. The side parts show St. Cecilia together with their groom, St. Valerian. The altar was gifted to Frederick III. on his request and moved to Berlin. The original is today in the Jagdschloss Grunewald, [22] but the church displays a copy. [23] The Castle was not damaged during the Thirty Years' War.

1933–1945 a part of the castle, the so-called Neues Schloss (New Palace) was used as a Gebietsführerschule by the Hitler Youth. [24] At the end of the war the castle burned down and was left a ruin for various decades. [25] Since 1979 the Bavarian Administration of State-Owned Palaces, Gardens and Lakes together with the Bauamt Nuremberg-Erlangen is responsible for the reconstruction and maintenance of the castle. The reconstruction started in 1982 with the Castle itself and was finished in 2007 with the new creation of the gardens. For seven years the inner and outer parts of the castle were open to the public and events were held. [26]

In 2013, it was decided to transform the Altes Schloss (Old Palace) into an experiential museum. [26] In 2017 it was opened under the name "HerrschaftsZeiten. Erlebnis Cadolzburg". [27]

South to the Main Castle exists an Antecastle (Vorburg) consisting of multiple buildings from the 17th and 18th century and a walled garden. The Wall Tower with the included clock is a gothic element from the 13th/14th century.

This tower (commonly called "the pencil"), being 25m, was built 1893 in a high place by the Lokalbahn Aktien Gesellschaft (LAG) in the neogothic style to boost tourism. [28] It used to be a popular destination for visitors from Fürth, especially when the cherry trees around the town bloomed. A square based wooden stairway goes five floors up, about half of the way there is a small balcony on one side of the tower, blocked by a wooden door. the roofed viewing platform based on a console looms over the upper part of the tower, which is slightly slimmer than the former part. The roof has got decorative windows on every side. It is open and almost every form sunrise to sunset and can be entered for a small fee.

Most parts of the city wall from the 15th century are still existent, above the Torturm (tower gate) one can see the carved date "1476".

The lutheran Markgrafenkirche St. Cäcilia was built in the years 1750/51 as a classical baroque forme (Saalbau) over the original (most likely gothic) church house. Its interior is dominated by a matroneum going round the building, maintaining an organ in the west. The baptismal front originates in the baroque phase (1751). Noticeable is the crufying group with wooden sculptures from the school of Veit Stoß (Mary and John dating back to 1470/80 and the crucifix 1500).

The 1668 built former Town Hall was restored and made a local museum by the Heimatverein das Rangau-Heimathaus. Visitors can learn in twelve rooms about the local history and the geology of the region. [29]

In the first half of the 1880s Cadolzburg was connected via stagecoach to Heilbronn, having a station of the Nuremberg-Crailsheim railway. [30] This lost its importance due to the annex of the Rangaubahn (the railway from Nuremberg via Fürth to Zirndorf). For a short time it was considered to further enlarge the line, exploring the quarries of the Dillenberg with the train but it was abandoned later due to difficulties with the topography. [31]

The public transport is organized by the Verkehrsverbund Großraum Nürnberg, the lines 136 and 152 connect Cadolzburg with neighboring towns and also a Regionalbahn from Fürth Central Station that terminates there.

In April 2016 there was a referendum whether or not to build a road around the town to reduce traffic within it. It was defeated with 69.61%. [32]

TSV Cadolzburg: The soccer department, which by far is the biggest part of the TSV, consists of eleven teams, have three normal and one small soccer field to play and compete. 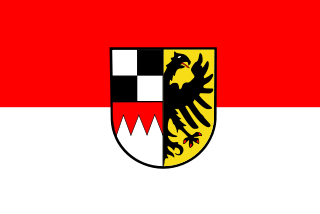 Middle Franconia is one of the three administrative regions of Franconia in Bavaria, Germany. It is located in the west of Bavaria and borders the state of Baden-Württemberg. The administrative seat is Ansbach; however, the most populous city is Nuremberg.

Fürth is a Landkreis (district) in Bavaria, Germany. It is bounded by the cities of Fürth and Nuremberg, and by the districts of Roth, Ansbach, Neustadt (Aisch)-Bad Windsheim and Erlangen-Höchstadt. 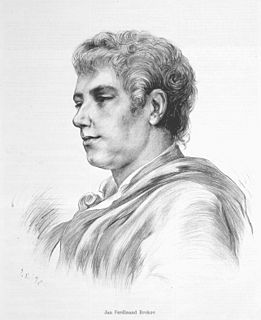 Ferdinand Maxmilian Brokoff was a sculptor and carver of the Baroque era.

Zirndorf is a town, which is part of the district of Fürth. It is located in northern Bavaria, Germany in the Regierungsbezirk of Middle Franconia.

Heilsbronn is a town in the Ansbach district of the Mittelfranken administrative region of Franconia, in the German state of Bavaria between Nuremberg and Ansbach, in the wooded valley of the Rangau. Its hallmark is the Katharinenturm, a medieval tower.

The Nuremberg S-Bahn is an S-Bahn network covering the region of Nuremberg, Fürth and Erlangen which started operations in 1987 and is now integrated in the Transport Association Region Nuremberg. The full length of the five current lines is about 277.6 kilometres.

Heroldsberg is a municipality in the district of Erlangen-Höchstadt, in Bavaria, Germany. It is located eleven kilometers north-east from the city of Nuremberg and 23 kilometers east from Erlangen and is the headquarters of Schwan-Stabilo.

Eching am Ammersee is a municipality in the district of Landsberg in Bavaria in Germany. It has a size of 6.15km2.

Dachsbach is a market town and municipality in the district of Neustadt (Aisch)-Bad Windsheim, in the administrative region of Middle Franconia in northern Bavaria in Germany.

Kürnach is a municipality in the district of Würzburg in Bavaria in Germany. The distance from Kürnach to the state capital of Bavaria München is about 221 km.

Wolfgang Heine was a German jurist and social democrat politician. Heine was a member of the Imperial parliament and the Weimar National Assembly, he served as Minister President of the Free State of Anhalt and Prussian Minister of the Interior and Justice.

The Prayerbook of Otto III or Pommersfelden Prayerbook is an Ottonian illuminated manuscript, made up of 44 bound parchment folios. It was produced around 984 in Mainz for the private use of Otto III, Holy Roman Emperor, commissioned by his mother Theophanu and Archbishop Willigis. It is the only prayerbook to survive from the Ottonian era and its texts and images set out a monastic model for an ideal sovereign, making it more precisely a mirror of princes.

Andreas Roth was a German painter.

Hausen is a village in the town Greding in the district of Roth in Middle Franconia in Bavaria.

Weinzierlein is a village in the town of Zirndorf in the Central Franconian district of Fürth in Bavaria, Germany.

Manheimer Berlin is a German fashion house originally founded in 1839. Together with other brands it was at its height in 1920s Germany until its demise in 1929. The company was re-opened in Berlin on December 2018 with the great-great-grandson of Valentin Manheimer, Andreas Valentin in attendance.

Bernhard Goldenberg was a German engineer. 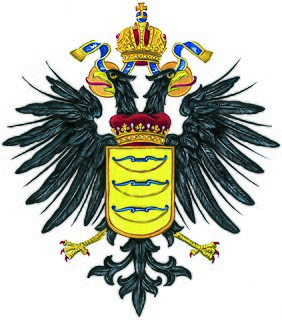 Arco is the name of an ancient noble family, originally from Arco, in northern Italy. They were first attested to in 1124 and were recognized as free nobles in 1186. For many centuries, they held the Castle of Arco. In 1413, they became imperial counts. In the 17th century, members of the family moved from Arco to Bavaria, Mantua, Salzburg, and Silesia. The family is still extant, primarily in Bavaria, but the Castle of Arco has belonged to the municipality of Arco since 1982.