Camagüey (Spanish pronunciation:  [kamaˈɣwej] ) is a city and municipality in central Cuba and is the nation's third-largest city with more than 321,000 inhabitants. It is the capital of the Camagüey Province.

It was founded as Santa María del Puerto del Príncipe in 1514, by Spanish colonists on the northern coast and moved inland in 1528, to the site of a Taino village named Camagüey. It was one of the seven original settlements (villas) founded in Cuba by the Spanish. After Henry Morgan burned the city in the 17th century, it was redesigned like a maze so attackers would find it hard to move around inside the city.

The symbol of the city of Camagüey is the clay pot or tinajón, used to capture rain water and keep it fresh. Camagüey is also the birthplace of Ignacio Agramonte (1841), an important figure of the Ten Years' War against Spain. A monument by Italian sculptor Salvatore Buemi, erected in the center of the area to Ignacio Agramonte, was unveiled by his wife in 1912. It is composed of an equestrian statue, reliefs in bronze that reveal fragments of the life of Agramonte, and a sculpture of a woman that symbolizes the motherland.

In July 2008, the old town was designated a UNESCO World Heritage Site.

Camagüey was founded as Santa María del Puerto del Príncipe in 1514, by Spanish colonists led by Diego Velázquez de Cuéllar at a location now known as Nuevitas on the northern coast. It was one of the seven original settlements (villas) founded in Cuba by the Spanish. The settlement was moved inland in 1528 to the site of a Taíno village named Camagüey. The village may have been named for a local chief, or perhaps for a tree endemic to the region.

The new city was built with a confusing lay-out of winding alleys. There are many blind alleys and forked streets that lead to squares of different sizes. One explanation is that this was done by design, to make the city easier to defend from any raiders; by the same version, the reason that there is only one exit from the city was that should pirates ever return and succeed in entering the city, it would be possible for local inhabitants to entrap and kill them. However, locals dispute this reasoning as a myth, asserting that in truth the city developed without planning, and that winding streets developed out of everybody wanting to stay close to their local church (the city has 15 of them).

Located on a plain in the middle of its province, the municipality borders with Vertientes, Florida, Esmeralda, Sierra de Cubitas, Minas, Sibanicú and Jimaguayú.

The symbol of the city of Camagüey is the clay pot or tinajón, used to capture rain water to be used later, keeping it fresh. Clay pots are everywhere, some as small as a hand, some large enough for two people to stand up in, either as monuments or for real use. A local legend is that if you drink water from a "tinajon", you will stay in Camagüey ("Quien tome agua del tinajón, en Camagüey se queda"), meaning that if you meet a Camagüayense girl, you will fall in love with her and never leave. The main secondary education institutions are the University of Camagüey and the Instituto Pedagógico de Camagüey.

In July 2008, the old town was designated a UNESCO World Heritage Site.

The old city layout resembles a real maze, with narrow, short streets always turning in one direction or another. After Henry Morgan burned the city in the 17th century, it was designed like a maze so attackers would find it hard to move around inside the city.

Camagüey counts an important railway station on the main Havana-Santiago line with connections to minor lines. The station lies in the central "Avenida Van Horne", at the corner with "Avenida Finlay". The city is crossed by the Carretera Central highway and counts a beltway. The A1 motorway, that will link Havana to Guantánamo, and partly built, is in project phase in the city area.

Camagüey has its own international airport, Ignacio Agramonte International Airport located in the north-eastern suburb. Most tourists going to or leaving the Beach of Santa Lucía do so through this airport.

According to the Köppen Climate Classification system, Camagüey has a tropical savanna climate, abbreviated "Aw" on climate maps. [3] Since Cuba is a hotspot for tropical cyclones, it has been affected many times, like in 1932, with the 1932 Cuba hurricane.

Although it is not the only high school in the City, the Pre-Universitario, sometimes referred to as "Vocational School" but formally known as "Instituto Pre-Universitario Vocacional de Ciencias Exactas" (IPVCE) Máximo Gómez Báez es:Instituto Preuniversitario Vocacional de Ciencias Exactas – or, in English, Vocational Pre-University Institute of Exact Sciences Máximo Gómez Báez – is the largest of its kind in the province of Camagüey. The size of the institution qualifies it as a "learning city". This center is homologous to others existing in the rest of the country's provinces. Students usually form close bonds and lasting friendships while at the institution, but family bonds sometimes suffer and "traditional" moral attitudes tend to shift as teenagers spend weeks away from their family. To be admitted into the IPVCE, students must take an entrance exam after completing the preparation of the Basic Secondary Education (7th to 9th grade). During the following three years they receive intensive preparation in order to gain acceptance to college.

What we know in United States as High Schools (9-12 grade), in Cuba is called Secundaria from (7-9 grade) and Pre-Universitario from (10-12 grade). Some relevant Secundarias in Camagüey are La Avellaneda, Torre Blanca, Javier de la Vega, Ana Betancourt de Mora, Ignacio Agramonte, and many others. In Camagüey city, there are other high schools, as well as schools for athletes (ESPA, and EIDE), for artists (The School of Art), and the Military High School "Camilo Cienfuegos" (also known as "Camilitos", in honor of Camilo Cienfuegos, hero of the Cuban Revolution).

Camagüey is the birthplace of professional boxer Luis Ortiz (1979).

Camagüey is also the birthplace of Ignacio Agramonte (1841), an important figure of the Ten Years' War against Spain between 1868 and 1878. Agramonte drafted the first Cuban Constitution in 1869, and later, as a Major General, formed the fearsome Camagüey cavalry corps that had the Spaniards on the run. He died in combat on May 11, 1873; his body was burned in the city because the Spanish feared the rebels would attack the city to recover his body.

The outline of Ignacio Agramonte's horseback statue in the Park that bears his name is a symbol of Camagüey. It was set there in 1911, uncovered by his widow, Amalia Simoni.

The city is the birthplace of Major League Baseball Hall of Fame member Atanasio Perez Rigal (Tony Pérez), who won two World Series titles with the Cincinnati Reds and was the 1967 All Star Game MVP.

The city is also the birthplace of the Cuban national poet Nicolás Guillén, and of Carlos J. Finlay, an outstanding physician and scientist, who first identified the Aedes aegyptis mosquito as the vector of yellow fever.

Father José Olallo Valdés worked there, and was beatified in the city on November 29, 2008.

It is the birthplace of the Cuban writer Severo Sarduy, a member of the European intellectual community that consolidated in the 1960s behind Tel Quel, a journal of critical thought. Sarduy, censored in Cuba throughout the 20th century, lived in Paris as an exile from 1960 until his death in 1993. He holds the position within literary history of having reformulated the transatlantic reconfigurations of the Hispanic Baroque aesthetic under the term "Neobaroque". 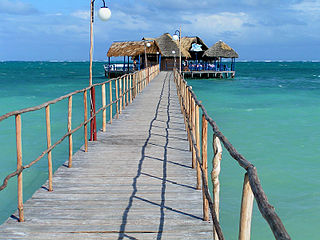 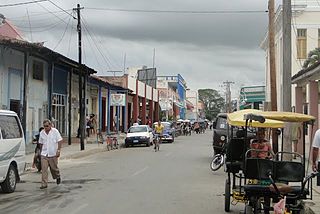 Ciego de Ávila is a city in the central part of Cuba and the capital of Ciego de Ávila Province. The city has a population of about 119,000, in a municipality of 143,449. 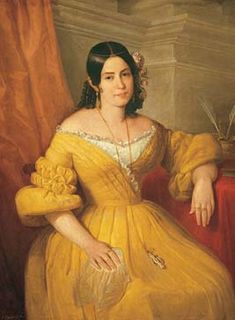 Gertrudis Gómez de Avellaneda y Arteaga was a 19th-century Cuban-born Spanish writer. Born in Puerto Príncipe, she lived in Cuba until she was 22. Her family moved to Spain in 1836, where she started writing as La Peregrina, and she lived there until 1859, when she moved back to Cuba with her second husband until his death in 1863, after which she moved back to Spain. She died in Madrid in 1873 from diabetes at the age of 59.

The Democratic Solidarity Party was a political liberal party in Cuba. Although changes to the Cuban constitution in 1992 decriminalized the right to form political parties other than the Communist Party of Cuba, these parties are not permitted to campaign or engage in any public political activities on the island. The Democratic Solidarity party described itself as "an organization from within Cuba promoting democracy and the respect for human rights by the peaceful route." The last President of the party was Fernando Sánchez López. The party was a full member of Liberal International. 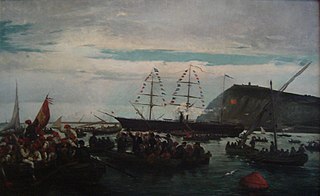 The Ten Years' War (1868–1878), also known as the Great War and the War of '68, was part of Cuba's fight for independence from Spain. The uprising was led by Cuban-born planters and other wealthy natives. On October 10, 1868 sugar mill owner Carlos Manuel de Céspedes and his followers proclaimed independence, beginning the conflict. This was the first of three liberation wars that Cuba fought against Spain, the other two being the Little War (1879–1880) and the Cuban War of Independence (1895–1898). The final three months of the last conflict escalated with United States involvement, leading to the Spanish–American War.

Máximo Gómez y Báez was a Dominican Major General in Cuba's Ten Years' War (1868–1878) against Spain. He was also Cuba's military commander in that country's War of Independence (1895–1898). He was known for his controversial scorched-earth policy, which entailed dynamiting passenger trains and torching the Spanish loyalists' property and sugar plantations—including many owned by Americans. He greatly increased the efficacy of the attacks by torturing and killing not only Spanish soldiers, but also Spanish sympathizers. By the time the Spanish–American War broke out in April 1898, Gómez had the Spanish forces on the ropes. He refused to join forces with the Spanish in fighting off the United States, and he retired to a villa outside of Havana after the war's end. 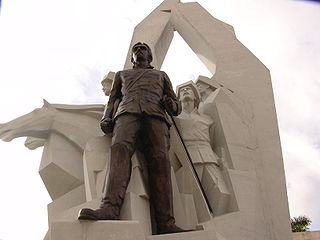 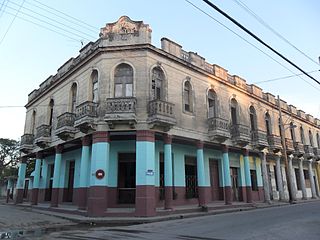 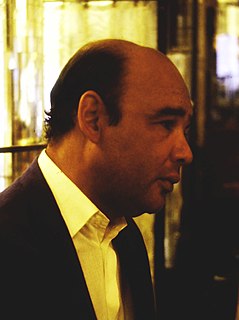 Severo Sarduy was a Cuban poet, author, playwright, and critic of Cuban literature and art. Some of his works deal explicitly with male homosexuality and transvestism.

The University of Camagüey "Ignacio Agramonte" is a university located in Camagüey, Cuba. It was founded in 1967 and is organized in 9 Faculties.

Vocational Pre-University Institute of Exact Sciences are Cuban Pre-university or High School Institutes with very special characteristics. For instance, these schools have a similar program to the AP's classes in American High Schools. Schools of this kind were founded with a common goal: to increase the number of students that study scientific careers with a higher education and general preparation.There is a really higher educational system in comparison with the normal system applied in all of the other schools around the country.

Joaquín de Agüero was a Cuban revolutionary. In 1843 he freed all his slaves. In 1851 he headed an insurrection against the Spanish government, in the central part of the island. After a desperate contest, he was defeated in battle, captured, and shot, together with his main followers. 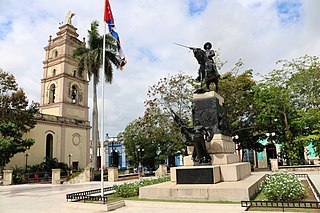 The following is a timeline of the history of the city of Holguín, Cuba.

The Paseo de Tacón, or Paseo Militar, was created by the Captain General Miguel Tacón y Rosique (1834–1838) who promoted the reform of the “road” that, starting from the calles of San Luis de Gonzaga (Reina) and Belascoáin, connected to the Castillo del Príncipe. Calle Belascoáin was the edge between the city and the countryside.

See also: Bibliography of the history of Camagüey