The Cameroonian Football Federation (French : Fédération Camerounaise de Football) is the governing body of football in Cameroon. It is known as FECAFOOT. The acting President of FECAFOOT is Seydou Mbombouo Njoya elected in December 2018

The Cameroon national football team, represents Cameroon in men's international football and It is controlled by the Fédération Camerounaise de Football. The team has qualified seven times for the FIFA World Cup, more than any other African team. However, the team has only made it once out of the group stage. They were the first African team to reach the quarter-final of the FIFA World Cup in 1990, losing to England in extra time. They have also won five Africa Cup of Nations and Olympic gold in 2000. The team represents Cameroon both in FIFA and Confederation of African Football (CAF).

Stade de Mbouda is a multi-use stadium in Mbouda, Cameroon. It is currently used mostly for football matches. It serves as a home ground of Bamboutos FC. The stadium holds 12,000 people. Mbouda was selected as first of a series of ten Cameroonian cities to be part of a program to upgrade football facilities in Cameroon. Consequently, Stade de Mbouda was renovated, extended and can be ranked second stadium in the Cameroonian western province, which hosts five of overall fourteen first division teams in Cameroon. After this face lifting, that was jointly financed by the Cameroonian Football Association (FECAFOOT) and MTN, the (re)inauguration of Stade de Mbouda was scheduled on Saturday, January 31.

Sports in Cameroon is practiced widely by the population and advocated by the national government. Cameroonians take pride in victories at international competitions, making sport an important source of national unity. Traditional sports in Cameroon include canoe racing, swimming, tug of war, and wrestling. Wrestling has featured in the initiation rites and other ceremonies of ethnic groups such as the Bakweri and the Duala. However, in modern times, sports such as basketball, boxing, cycling, handball, netball, and table tennis have become popular. The 40 km Mount Cameroon Race of Hope draws several hundred runners each year. Tourists hike, rock climb, and mountaineer, especially up Mount Cameroon. Yaoundé, Tiko and Kribi have golf courses. Rugby union is also played, with about 15 clubs and 3000 players nationally.

Gautier Bello is a Cameroonian footballer. 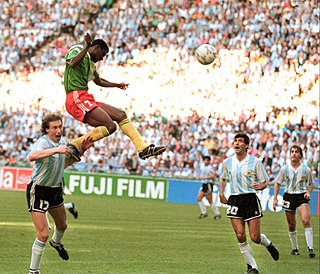 The most popular sport in Cameroon is football. The national team is traditionally one of the strongest teams on the African continent. They have participated in the World Cup 5 times, and in 1990 they reached the quarter-finals. It took extra time before England won the game 3–2. They have also won the African Cup of Nations 4 times as well as winning Olympic gold in Sydney in 2000. Among the most famous players are Roger Milla, Thomas N'Kono and Samuel Eto'o.

Cameroon competed at the 2012 Summer Olympics in London, United Kingdom, from 27 July to 12 August 2012. This was the nation's thirteenth appearance at the Olympics.

Cameroon national under-23 football team represents Cameroon in international football competitions in Olympic Games. The selection is limited to players under the age of 23, except during the Olympic Games where the use of three overage players is allowed. The team is controlled by the Cameroonian Football Federation.

André-Frank Zambo Anguissa is a Cameroonian professional footballer who plays as a centre midfielder for La Liga club Villarreal CF on loan from English club Fulham and the Cameroonian national team.

Cameroonian Federation of Sports the Intellectually Disabled (FECASDI) is the national sports federation for sportspeople with intellectual disabilities competing in International Sports Federation for Persons with Intellectual Disability (INAS) and Paralympic events. They organize national ID sports championships. The federation was recognized by law in 2010, and then became a member of the Cameroonian Paralympic Committee in 2011. FECASDI has tried to get its sportspeople qualified for the 2012 Summer Paralympics. They have also hosted several conferences.

Cameroonian Sports Federation for People with Disabilities (FECASH) was one of the primary national sports federation for people with disabilities in Cameroon prior to the organization being dissolved in August 2011. It served as the country's National Paralympic Committee for many years. Problems with internal governance arose starting in the early 2000s and continued until the federation closed.

Special Olympics Cameroon is the national sports federation for people with intellectual disabilities. Founded in 2005, the Chairman of the Board was Christophe Ampouam and Director was Jean-Marie Aléokol Mabiemé.

Michaela-Batya Bisi Abam is an American-born Cameroonian footballer who plays as a forward for Real Betis in the Spanish Primera División and the Cameroon national team. She previously played for Sky Blue FC in the National Women's Soccer League and West Virginia University.

The 2019 Africa Cup of Nations was an international football tournament that was held in Egypt from 21 June to 19 July 2019. The 24 national teams involved in the tournament were required to register a squad of 23 players, including three goalkeepers. Only players in these squads were eligible to take part in the tournament.

The following is a list of squads for each national team competing at the 2019 Africa U-23 Cup of Nations. The tournament took place in Egypt, between 8–22 November 2019. It was the third U-23 age group competition organised by the Confederation of African Football (CAF).

The 2019–20 Elite One was the 60th season of the Elite One,the top-tier football league in Cameroon. This was the first season in the Elite One to use an October–May schedule since the 2011–12 season, it was changed so as to conform with the new CAF calendar.