Camillo Rondani (21 November 1808 – 17 September 1879) was an Italian entomologist noted for his studies of Diptera.

Camillo Rondani was born in Parma when the city was part of the French Empire Napoleon having crowned himself King of Italy. The Rondani family were wealthy landowners and of "rich and of ancient origins" with ecclesiastical connections preliminary.

Camillo's early education was in a seminary. He then passed into the public school system where, encouraged by Macedonio Melloni his physics and chemistry teacher in the preparatory course for the University of Parma, he did not attend the law lessons though his family had insisted. He attended mineralogy classes given by a Franciscan priest Father Bagatta and was taught natural history, a complementary course to botany for Medicine and Pharmacy. The Reader of Botany to the Athenaeum Parmesan was Professori Giorgio Jan, assistant at the Imperial Museum in Vienna and holder of the chair of zoology in Parma University. From Jan, Rondani received many gifts to his collection: Coleoptera and a herbarium. Through Jan, Rondani gained access to the house of the Conte Stefano Sanvitale, where an entomological club had access to the insect collection of Pietro Rossi.

Career in law, politics and commerce

Rondani qualified as a lawyer in 1831. A plan to study zoology at the University of Paris, a condition of his proposed appointment as Professor of Natural Science in Parma, came to nothing as Italy was thrown into political turmoil, the university urging its students to die for the unity of Italy, a resurgent demand of Giuseppe Garibaldi. Following the Ducal restoration after three years of provisional government, not only was the chair of Zoology a distant dream, but the legal faculty had been removed to Piacenza in order to diminish the number of politically active students.

Camillo and his brother Emilio, who had been imprisoned by the temporary government, turned to colonial commerce. Rondani studied the insects of the exotic products describing two of the beetles he found Cis jalapa from chillies and Brucus dolici from Santa Domingo coffee.

In 1833 Rondani married his first love, Petronilla, for whom he later named a new species of Ceria now Sphiximorpha petronillae. The couple ran a family farm on the pleasant hillsides of Guardasone. This was transformed with dams and scientific soil management systems which he used for studying agronomy and, with Petronilla, poetry and the arts. It was at this time that his studies of Diptera began, possibly because of their agricultural significance.

After his wife died, Rondani focused intensely on entomology, working especially on the biology of parasitic insects (Diptera and Hymenoptera).

Although little of his entomological work was published by Rondani himself, it raised him to preeminence. In 1840, he became a member of the Academy of France, published his first paper, and corresponded with Félix Édouard Guérin-Méneville on insects of Sicilian amber. Further publications rapidly followed on species new to Italy, new to science, plans of classifications, taxonomic arguments, and initial work on his masterwork, the Prodomo, a treatise on Diptera. Many were (confusingly) printed locally at the printing office in Parma, but then, following amendments in the entomological journals Nuovi Annali di Scienze Naturali di Bologna, Magazin de Zoologie de M. J. Guérin Ménéville, and the Annales de la Société Entomologique de France .

In the nationalistic wars of 1848 the Rondani's were recalled to Parma. Camillo was briefly elected to represent Traversetolo. Following the catastrophic defeat of the Piedmontese at the Battle of Novara, Rondani retired back to Guardasone, and for some years, as Italians became increasingly involved in colonial ambition, worked on exotic Diptera. In these years he began to collaborate with the Irish entomologist Alexander Henry Haliday with whom he was to co-found the Italian Entomological Society.

In 1855, when Luisa Maria of Borbone, sister of Maria Christina of Bourbon-Two Sicilies reopened the university of Parma, which had virtually closed its doors in 1849, Rondani became Professor of Agronomy. The Prodromo began in earnest, as Rondani alternated teaching with research much of it in applied entomology. Ten years Parma became part of the United Provinces of Central Italy, joining Tuscany, Modena and Piacenza). This led to changes in the university. The chair of agronomy was abolished and Rondani became emerito University professor of the University and insignito of the cross of the Saints Maurizio and Lazzaro. He became a natural history teacher in the R.? Grammar school and also Director of the Agrarian Institute where he taught agronomy. Rondani remained in both posts for the next ten years though the Institute passed to the Provincial Administration in 1865.

Rondani became a popular writer for several newspapers and had various assignments from government and from the Camera d'Agricoltura e Commercio [Agriculture and Commerce Chamber] and the Giunta Superiore di Statistica [Advanced Committee of Statistics] for which he was awarded a medal. He maintained his interest in politics to the last, being an influential member of the Consigli della Provincia e del Comune, unhesitatingly supporting liberal and progressive ideals.

He married a second time, to his cousin Elisa Gelati.

Rondani died on September 17, 1879. His collection is in La Specola Museum, Florence, Italy.

Insects named in honour of Rondani

Rhinophoridae is a family of flies (Diptera), commonly known as Woodlouse Flies, found in all zoogeographic regions except Oceania, but mainly in the Palaearctic and Afrotropical regions.

Carnidae, also known as Bird flies or Filth flies, is a family of flies (Diptera). There are 6 genera, containing about 93 species worldwide.

Cadurciella is a genus of flies in the family Tachinidae.

Chetina is a genus of bristle flies in the family Tachinidae.

Zeuxia is a genus of flies in the family Tachinidae.

Spathulina is a genus of tephritid or fruit flies in the family Tephritidae.

Azeliini is a tribe of flies from the family Muscidae.

Haematobia is a genus of biting true flies of the family Muscidae.

Chrysogaster is a genus of small hoverflies in the subfamily Eristalinae. They are dark or black with shiny colourful reflections and can often be seen visiting flowers in damp marshy areas where the aquatic larvae live. Species in the related genera Melanogaster, Orthonevra, Lejogaster and Riponnensia were formerly treated as members of Chrysogaster.

The Milesiini is a large and diverse tribe of hoverflies. They mimic wasps or hornets. 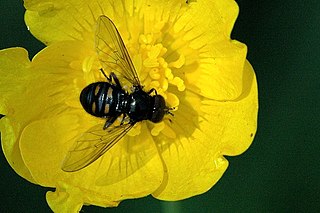 Pipizini is a tribe of small to medium-sized generally black hoverflies, although some species aso have orange spots on their abdomen. This nondescript colouring can lead to some species being confused with other dark hoverflies from other tribes. The lack of a facial knob is a good defining feature which separates them from most of these other hoverflies. As with other species in the subfamily Syrphinae the larvae feed on aphids though there seems to be a preference for wax-secreting aphids e.g. Pemphigidae.

Dipterologiae Italicae prodromus is a fundamental work of systematic entomology by the Italian entomologist Camillo Rondani. It consists of seven volumes published in Paris, Parma, Firenze (Ex Tipographia A. Stocchii between 1856 and 1877. It is written in Latin. The subject is the Diptera of Italy.

Brachystoma is a genus of flies belonging to the family Empididae.

Mosillus is a genus of shore flies in the family Ephydridae.

Lejota is a genus of syrphid flies in the family Syrphidae.

Brachicoma is a genus of true flies in the family Sarcophagidae.

Sarcophila is a genus of true flies in the family Sarcophagidae.

Blerina is a subtribe of hoverfly in the family Syrphidae.

The Pipizinae is a subfamily of hoverflies. The subfamily Pipizinae was formerly considered a tribe within Eristalinae, but a phylogenetic analysis published in 2015 suggests it should be ranked as a separate subfamily