Campagna (Italian: pronounced  [kamˈpaɲɲa] ) is a small town and comune of the province of Salerno, in the Campania region of Southern Italy. Its population is 17,148. [3] Its old latin name was Civitas Campaniae (City of Campagna). Campagna is located in one of the Picentini Mountains valleys at an altitude of 270 meters above sea level.

The first records of the area date back to the IX century in the Lombard period. The position of the town was strategic for enemies attacks during the Middle Age. Lately, the town became an important cultural and religious center. It was home for many Bishops until the 1973 when the Diocese of Campagna merged with the Archdiocese of Salerno.

During the Second World War, Campagna was a temporary home for many Jews thanks to Giovanni Palatucci and his uncle Giuseppe Maria Palatucci. People arrived from the north of Italy and Campagna citizens hid those people in the basements of the churches. Giovanni was later honoured as a Righteous Among the Nations by the Yad Vashem Holocaust Memorial. Much of this is documented in Elizabeth Bettina's book, It Happened in Italy . Today, goods left by the Jews are shown in the Museo della Memoria in the Campagna town centre.

Campagna borders with Acerno, Contursi Terme, Eboli, Olevano sul Tusciano, Oliveto Citra, Postiglione, Serre and Senerchia (this one in the Province of Avellino),

Campagna is famous for its traditional summer event ‘A Chiena’ (Italian : La Piena), which takes place annually every weekend between July and August. During the event, the city river Tenza is deflected from its natural course through the city main street where people wait for the water to come. [4] This tradition comes from the ancient practice of cleaning the streets by using the river water. Later, it was converted into a delightful moment for locals and tourists. [5]

Monte Carlo in the Principality of Monaco is Campagna's sister city.

Fabriano is a town and comune of Ancona province in the Italian region of the Marche, at 325 metres (1,066 ft) above sea level. It lies in the Esino valley 44 kilometres (27 mi) upstream and southwest of Jesi; and 15 kilometres (9 mi) east-northeast of Fossato di Vico and 36 kilometres (22 mi) east of Gubbio. Its location on the main highway and rail line from Umbria to the Adriatic make it a mid-sized regional center in the Apennines. Fabriano is the headquarters of the giant appliance maker Indesit.

Spello is an ancient town and comune (township) of Italy, in the province of Perugia in east central Umbria, on the lower southern flank of Mt. Subasio. It is 6 km (4 mi) NNW of Foligno and 10 km (6 mi) SSE of Assisi.

Bienno is an Italian comune in Val Camonica, province of Brescia, Lombardy, classed as one of the five most beautiful villages of Italy by the Council of Tourism of the Association of Italian Municipalities (ANCI).

Vizzini is a town and comune in the Metropolitan City of Catania, on the island of Sicily, southern Italy. It is located 60 kilometres (37 mi) from Catania in the Hyblaean Mountains, on the most northwesterly slopes of Monte Lauro. 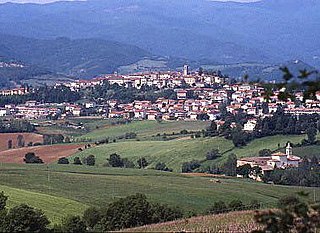 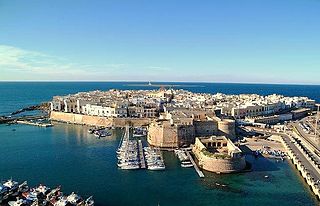 Gallipoli is a southern Italian town and comune in the province of Lecce, in Apulia. In 2014, it had a population of 31,862.

Altino is a comune and town in the province of Chieti in the Abruzzo region of southern Italy. It is located on a rock spur commanding the valley of the Aventino river. The valley is richly cultivated with orchards, fruit, grapes and olives.

Oliveto Citra is a town and comune in the province of Salerno in the Campania region of south-western Italy. It is located 55 kilometres (34 mi) by road northeast of Salerno. As of 2016, the comune had 3,802 inhabitants and covered an area of 31.62 square kilometres (12.21 sq mi). 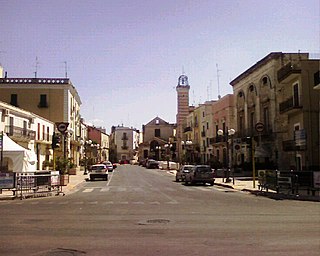 Maruggio is a village and comune in the province of Taranto, Apulia, southeast Italy. The village is located in a natural depression 2 kilometres (1.2 mi) from the Gulf of Taranto, in the north-west part of Salento peninsula. The nearest villages are Torricella at 6 kilometres (4 mi), Sava at 10 kilometres (6 mi), Manduria at 12 kilometres (7 mi) and Avetrana at 16 kilometres (10 mi).

Arco is a comune in Trentino-Alto Adige in northern Italy.

Montecassiano is a comune (municipality) in the Province of Macerata in the Italian region Marche, located about 30 kilometres (19 mi) south of Ancona and about 8 kilometres (5 mi) north of Macerata.

Militello in Val di Catania is a comune (municipality) in the Metropolitan City of Catania in the Italian region Sicily, located about 160 kilometres (99 mi) southeast of Palermo and about 35 kilometres (22 mi) southwest of Catania, on the last slopes of the Hyblaean Mountains. It has a railway station on the line Catania-Gela. 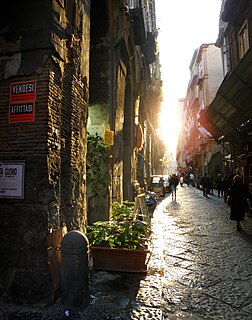 Via dei Tribunali is a street in the old historic center of Naples, Italy.

Via Giulia is a street in Rome, Italy, important for historical and architectural reasons. The road, one of the first important urban planning projects in papal Rome, became soon one of the main centers of the Renaissance, and until the mid of 18th century was one of the favorite streets of the Roman nobility, which enlivened it with feasts and games. After a two-century eclipse, from the mid-twentieth century the road has been living a rebirth, and now it is again one of the city's most prestigious addresses.

Rocchette di Fazio is a village in Tuscany, central Italy, administratively a frazione of the comune of Semproniano, province of Grosseto. At the time of the 2001 census its population amounted to 19. 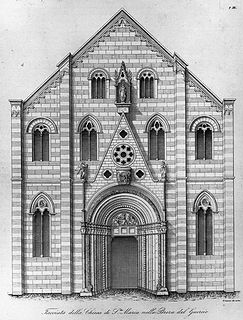 Santa Maria in Brera was a church in Milan, in Lombardy in northern Italy. It was built by the Humiliati between 1180 and 1229, given a marble façade and Gothic portal by Giovanni di Balduccio in the fourteenth century, and deconsecrated and partly demolished under Napoleonic rule in the early nineteenth century. The Napoleonic rooms of the Pinacoteca di Brera occupy the upper floor of what was the nave.