Cananea is a city in the Mexican state of Sonora, Northwestern Mexico. It is the seat of the Municipality of Cananea, in the vicinity of the U.S−Mexico border.

The first non-indigenous inhabitants of the present day Cananea, arrived in 1760 from other parts of the Spanish Viceroyalty of New Spain (colonial México).

In the 19th century General Ignacio Pesqueira, from nearby Arizpe, retired to Cananea. He fought against the Apache who raided the area. One time, while following them into the mountains, he discovered the abandoned Spanish mines and by 1868 he had renewed the extraction of minerals in the Cananea mines. General Pesqueira's wife, Elena Pesqueira Pesqueira, "discovered" a nearby mountain range (sierra) and the General named the highest peak La Elenita ("The Little Helen", 9,327 feet or 2,843 meters above sea level) in her honor. The other peak is named La Mariquita ("The Little Mary", 8,123 feet or 2,476 meters above sea level).

In 1889 William Cornell Greene purchased the mine from General Pesqueira and founded the Nogales, Sonora-based company, The Cananea Consolidated Copper Company, S. A. (CCCC or 4C). In June 1906, a labor dispute erupted into the violent cross-border Cananea strike, that resulted in the death of 23 people and dozens injured, in a fight between the strikers and a posse led by Arizona Rangers from the United States. A corrido titled La cárcel de Cananea ("Cananea jail") written in 1917 and commemorating the incident has since become famous. At the time of the strike the population of 23,000 included 7,000 Americans and 5,000 Chinese. [1]

The Cananea jail was built in 1903 and is located in downtown Cananea. It was the first public jail of the city and is currently a museum "Museo de la Lucha Obrera" with exhibitions of photographs and instruments used in mining.

La carcel de Cananea or The Cananea Jail song is a corrido that has become part of the culture of Cananea and the state of Sonora. It describes the experiences of a man accused of murdering Chinese immigrants while at this jail. According to historian Rodolfo Rascón, a man called Francisco, nicknamed El Cucharón de Batuc ("The Big Spoon of Batuc"), wrote the song in 1917.

Atypically for the Mediterranean climate type, the dry season occurs in spring and early summer, whereas the rainy season is in mid/late summer and autumn. Through winter the rains are less intense, but of longer duration. Called “equipatas”, they can fall in the form of snow. In the months of February, March, and April there are frequent frosts, hailstorms, and occasional snowstorms. Precipitation averages at 511 millimetres (20 in) annually.

Mining is the main source of revenue for Cananea and will be for the foreseeable future. Eighty percent of the population is directly or indirectly supported by mining companies in Cananea. The first and most important mining company is Buenavista del Cobre, S.A. de C.V. (formerly Mexicana de Cananea, S.A. de C.V.) owned by the Southern Copper Corporation, [4] and still shares ownership with Grupo Mexico, S.A.B. de C.V. [5] Grupo Mexico plans to invest $3.7 Billion US Dollars at the Cananea Mine. This program is expected to increase Buenavista's production capacity from 180,000 tons of copper per year to over 450,000 tons. During 2Q11, Buenavista reached its full capacity and produced 45,588 tons of copper: 15,170 tons of copper cathode at its SX/EW Plant and 30,417 tons of copper concentrate at the Concentrator Plant. Cananea is among the world's largest copper mines in terms of reserves.

A miners strike at the Buenavista del Cobre mine lasted almost three years, until broken on the night of June 6, 2010, when Mexican police dispersed striking workers. [6] On June 6, 2011, the Confederation of Mexican Workers (“CTM”) was granted the collective bargaining agreement for the Buenavista union, replacing the miner's National Union of Mining and Metallurgical Workers Sindicate, Section No.65 (Labor Union), headed by Napoleón Gómez Urrutia.

The second and smaller active copper mine is "Minera Maria", owned by Minera Frisco, S.A.B. de C.V. a Mexican company controlled by Carlos Slim Helú and family, including Inmobiliaria Carso, S.A. de C.V. and located west of Cananea. The plant has an installed monthly production capacity of 2,500 tons of copper cathode.

Light industry is the second most important activity in the local economy, generating approximately 3,100 jobs. A modest industrial park north of the town comprises an area of 53 acres (210,000 m2). There are several companies operating as maquiladoras.The most important were co-founded by Mr. Benjamin Schirrmeister which they are "Fullfillmen Systems de México", "Stewart Connectors Systems de Mexico" , "Datacenter del Norte", "Customer Specific Cables". In other section they have "Fundidora de Cananea, S.A.", a manufacturer of ball mill liners, and "Road Machinery Company de México, S.A." -- which all aforementioned companies together provide approximately 600 jobs and are involved in diverse activities, from cable assembly to steel fabrication.

The intent to open a concrete products industrial park north of Cananea was announced in January 2018 by Ing. Glenn Edward Roy E. of "Ferrocret", a conglomerate that shall produce all manner of precast concrete products such as: hydro conduit; walls, floors, and ceilings of affordable housing; drycast concrete pavers; cinder block; concrete railway sleepers. The factories will utilise proprietary fast-cure concrete formulations in combination with the abundant nearly free-of-cost copper slag "escoria" -- an aggregate alternative to expensive riverbed-mined gravel. Over one hundred years of mining activities at Cananea have generated huge manmade mountains of copper slag... thereby providing an ideal, low-cost alternative for supplying graded aggregates for inclusion within those various precast concrete products. Precast concrete products manufacturing promises to become a major industry in the region, and one which shall lessen the dependence of the Cananea job force on a local economy that historically solely has been dependent upon the mines remaining open.

Cattle raising is important and there were approximately 16,000 head in the last census.

Farming consists mainly of corn, potatoes, beans, sorghum, alfalfa, barley, and apples. Most of these crops are used for local consumption and cattle fodder. The infrastructure consists of 30 wells, equipped with a system of electrical motors, and 10 kilometers (6 mi) of reinforced canals used for irrigation. 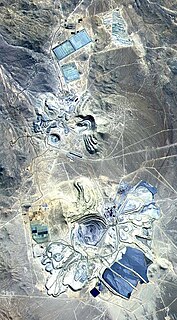 Minera Escondida is a mining company that operates two open pit copper mines in the Atacama Desert, 170 km southeast of Antofagasta in northern Chile. It is currently the highest producing copper mine in the world. Its 2007 production of 1.483 million tons of the metal was worth US$ 10.12 billion, mainly as metal in concentrate, but some as cathode, and was 9.5% of world output and 26% of Chilean production, according to the US Geological Survey's preliminary estimates of 2007 world mine output. 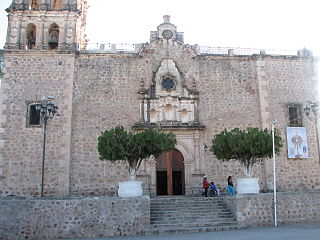 Álamos (Spanish['alamos]  is a town in Álamos Municipality in the Mexican state of Sonora, in northwestern Mexico.

Buenavista may refer to: 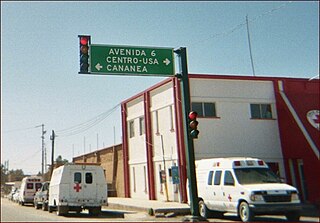 Grupo México is the largest mining corporation in Mexico and the third largest copper producer in the world through ASARCO. 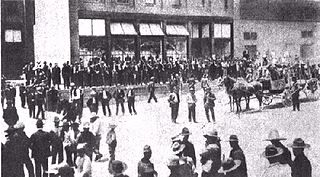 The Cananea strike, also known as the Cananea riot, or the Cananea massacre, took place in the Mexican mining town of Cananea, Sonora, in June 1906. Although the workers were forced to return to their positions with no demand being met, the action was a key event in the general unrest that emerged during the final years of the regime of President Porfirio Díaz and that prefigured the Mexican Revolution of 1910. In the incident twenty-three people died, on both sides, twenty-two were injured, and more than fifty were arrested.

El Teniente is an underground copper mine in the Chilean commune of Machalí in Cachapoal Province, Libertador General Bernardo O'Higgins Region, near the town of Sewell, 2,300 m (7,500 ft) above mean sea level in the Andes.

La cárcel de Cananea is a corrido written in 1917 commemorating the Cananea Strike that took place in the Mexican mining town of Cananea, Sonora, in June 1906. It has been produced in numerous versions, including one by Linda Ronstadt on her album Canciones de mi padre, released in 1987.

Colonel William Cornell Greene was an American businessman who was famous for discovering rich copper reserves in Cananea, Mexico, and for founding the Greene Consolidated Copper Company in 1899. By 1905, Greene was one of the wealthiest businessmen in the world.

La Caridad Mine is a large open-pit copper mine in Nacozari, Sonora, Mexico. It is operated by Mexicana de Cobre, S.A., which is a part of Grupo Mexico, the largest copper producer in Mexico. The mine lies approximately 8 mi (13 km) east of Nacozari de Garcia. 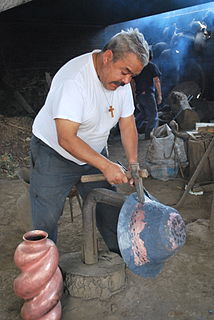 Traditional copper work in Mexico has its origins in the pre Hispanic period, mostly limited to the former Purépecha Empire in what are now the states of Michoacán and Jalisco. The reason for this was that this was the only area where copper could be found on the surface. After the Spanish conquest of the Aztec Empire, the Spanish took control of copper production, introducing European techniques but still needed indigenous labor. Copper work, like other crafts, was principally organized in Michoacán under Vasco de Quiroga. It is not known when the town of Santa Clara del Cobre came to specialize in the production of copper items, but it was well established by the mid 18th century. Copper extraction remained centered on Michoacán during the colonial period but most of the production gave out by the 19th century. After the Mexican Revolution, copper smiths of Santa Clara were limited to working with scrap metal making pots, plates, casseroles and other containers. Today, it remains home to hundreds of copper smiths which work in ways little changed from the colonial period and is home to the annual Feria del Cobre in August.

The Buenavista mine is a large copper mine located in the north-west of Mexico in Cananea, Sonora. It lies 35 km (22 mi) south of the international border near Nogales, Arizona. Buenavista mine represents one of the largest copper reserves in Mexico and in the world, having estimated reserves of 36 million tonnes of ore grading 0.69% copper, 3.3% zinc and 33.4 million oz of silver.

XHFQ-FM is a radio station in Cananea, Sonora. Broadcasting on 103.1 FM, XHFQ is owned by the Instituto Mexicano de la Radio and broadcasts a varied music format under the name "La FQ".