This article is a list of people proposed by each diocese of the Catholic Church for beatification and canonization, whose causes have been officially accepted by the Congregation for the Causes of Saints during the papacy of Pope Francis and are newly given the title as Servants of God. The names listed below are from the Vatican and are listed in month beginning the year 2013, with their birth and death year, position in clerical or religious life, and the place where the saint-to-be lived or died.

In the Latin Church of the Catholic Church, Servant of God is the style used for a person whose life is being investigated by the Church for possible sainthood. 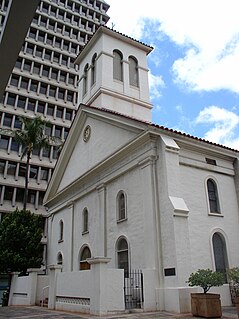 The Archdiocese of Davao is an ecclesiastical jurisdiction of the Catholic Church in the Philippines. It is a metropolitan see in southern Mindanao. The archdiocese comprises the city of Davao, The Island Garden City of Samal, and the municipality of Talaingod, Davao del Norte in Davao del Norte.

The Catholic Church in England and Wales is part of the worldwide Catholic Church in full communion with the Pope. It traces its history to the apostles through Catholic Christendom, the Western Latin Church, particularized and recorded in Roman Britain as far back as the 1st century. Later, in the 6th century, the church was judicially bonded to the Apostolic See of Rome, when Pope Gregory the Great through his Benedictine and Roman missionary, Augustine of Canterbury, established a direct link from the Kingdom of Kent to the Holy See in 597 AD. This ancient link to which Irenaeus says "every church" should "resort" on account of its "preeminent authority," has enriched the inter-church identity of the English Catholic Church, not only across Britain and continental Europe but also and especially globally within what is sometimes referred to as the "Catholic Communion of Churches". 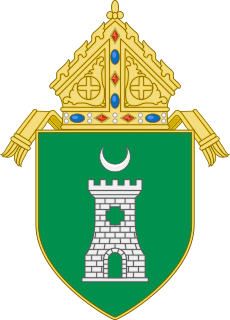 The Archdiocese of Zamboanga is a Catholic archdiocese in the Philippines. Its present jurisdiction includes Zamboanga City, with suffragans in Basilan, and Zamboanga Sibugay ; although for apostolic cooperation, Sulu Archipelago is included in this ecclesiastical province. It became Mindanao's first diocese in 1910, and was established as the second archdiocese of Mindanao in 1958. Today the archdiocese covers a land area of 1,648 square kilometers and has a population of 442,345, of which 81 per cent are Catholics. The archdiocese includes 27 parishes and one quasi-parish served by 49 diocesan and 18 religious priests. There are also 51 religious sisters working in the archdiocese.

The Archdiocese of Cagayan de Oro is an archdiocese of the Roman Catholic Church in the Philippines. It is a metropolitan see on the island of Mindanao which comprises the civil provinces of Misamis Oriental, Camiguin and the municipality of Malitbog, Bukidnon. Today, it is headed by Archbishop Antonio J. Ledesma, S.J and its seat is located at Saint Augustine Metropolitan Cathedral in Cagayan de Oro City. 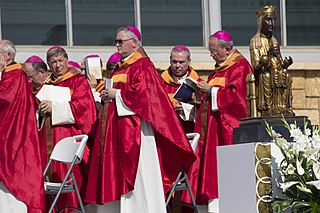 The 522 Spanish Martyrs were victims of the Spanish Civil War beatified by the Roman Catholic Church on 13 October 2013 by Pope Francis. It was one of the largest number of persons ever beatified in a single ceremony in the Church's 2000-year history. They originated from all parts of Spain. Their ages ranged from 18 to 86 years old.