Canebrake Ecological Reserve is a 6,700-acre (27 km2) [2] nature reserve in the South Fork Valley of Kern County, 20 miles (32 km) east of Lake Isabella, California. It is located in the Southern Sierra Nevada region.

Historian Wallace M. Morgan, in History of Kern County, California, wrote that the South Fork Valley was the first area settled around 1846, and described the valley as "a fertile strip of bottomland that forms the most important of the mountain farming districts." [3] The first acreage purchased for reserve was part of the 129-year-old Bloomfield Ranch.

The California Department of Fish and Game acquired the land in 1994 and by 1996, 1,300 acres (5.3 km2) became the Canebrake reserve, named after Canebrake Creek, a tributary of South Fork Kern River. A 1.2-mile (1.9 km) nature trail crosses Canebrake Creek, is wheelchair accessible, and has views of cottonwood-willow forest with several willow species (Salix gooddingii, S . lasiandra, and S . laevigata) and Fremont cottonwood (Populus fremontii) that intergrade with a relict stand of Joshua trees ( Yucca brevifolia ).

The reserve was enlarged by land purchases in 2002 and 2005 through the state Wildlife Conservation Board. Although not contiguous, one segment is in Cap Canyon, the other in Scodie Canyon, the lands are important corridors for wildlife connecting the reserve to Sequoia National Forest. [4] The 2005 purchase by the Wildlife Conservation Board (WCB) used Proposition 117 funds. [5] Proposition 117, known as the California Wildlife Protection Act of 1990, created the Habitat Conservation Fund with an annual budget of $30 million, for various state agencies such as the WCB. [6]

Rare bird species in the area include the federally listed endangered southwestern willow flycatcher [7] (Empidonax traillii extimus), state listed endangered western yellow-billed cuckoo (Coccyzus americanus occidentalis) [8] and the tricolored blackbird (Agelaius tricolor), a species of concern. The South Fork Kern population of southwestern willow flycatcher is one of the largest in the US. [9]

The Kern red-winged blackbird is on the state's species of concern list. . [10] Part of the historic nesting area on the South Fork Kern River was lost from land clearing. In 1954, the filling of Lake Isabella reservoir inundated and destroyed several miles of riparian and wetland nesting areas for the Kern red-winged blackbird. The largest breeding population still occurs in the South Fork Valley and may number as many as 500 individuals. The current nesting area is from Canebrake Ecological Reserve to the area around the town of Lake Isabella. [11]

A total of 340 acres (1.4 km2) were replanted with Fremont cottonwood and red willow on the South Fork Kern River, from 1987 to 1993. The plantings are on floodplain sites from which these species had been removed and the land cleared for agriculture. The survival rates for these plantings have exceeded 90 per cent. [12] 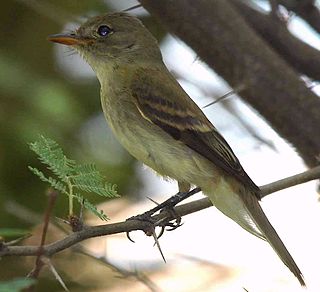 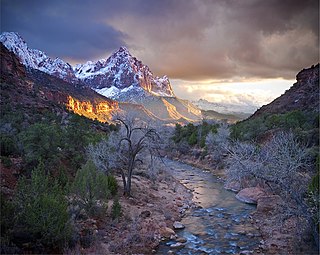 The Virgin River is a tributary of the Colorado River in the U.S. states of Utah, Nevada, and Arizona. The river is about 162 miles (261 km) long. It was designated Utah's first wild and scenic river in 2009, during the centennial celebration of Zion National Park. 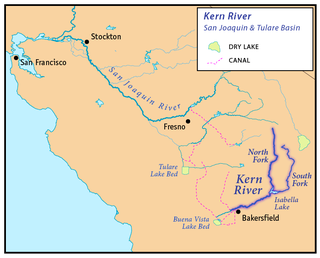 The Kern River, originally Rio de San Felipe, later La Porciuncula, is a Wild and Scenic river in the U.S. state of California, approximately 165 miles (270 km) long. It drains an area of the southern Sierra Nevada mountains northeast of Bakersfield. Fed by snowmelt near Mount Whitney, the river passes through scenic canyons in the mountains and is a popular destination for whitewater rafting and kayaking. It is the southernmost major river system in the Sierra Nevada, and is the only major river in the Sierra that drains in a southerly direction.

Bell's vireo is a songbird that migrates between a breeding range in Western North America and a winter range in Central America. It is dull olive-gray above and whitish below. It has a faint white eye ring and faint wing bars. 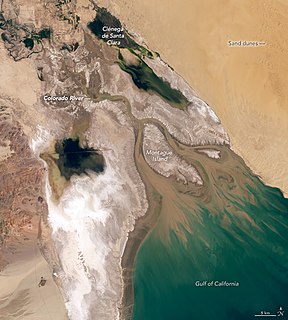 The Colorado River Delta is the region where the Colorado River flows into the Gulf of California in eastern Mexicali Municipality in the north of the state of Baja California in northwesternmost Mexico. The delta is part of a larger geologic region called the Salton Trough. Historically, the interaction of the river's flow and the ocean's tide created a dynamic environment, supporting freshwater, brackish, and saltwater species. Within the delta region, the river split into multiple braided channels and formed a complex estuary and terrestrial ecosystems. The use of water upstream and the accompanying reduction of freshwater flow has resulted in the loss of most of the wetlands of the area, as well as drastic changes to the aquatic ecosystems. However, a scheme is currently in place which aims to rejuvenate the wetlands by releasing a pulse of water down the river delta. 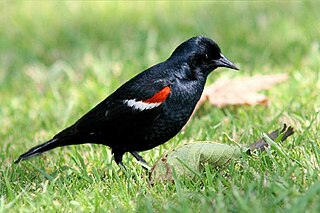 The tricolored blackbird is a passerine bird of the family Icteridae. Its range is limited to the coastal areas of the Pacific coast of North America, from Northern California in the U.S., to upper Baja California in Mexico. 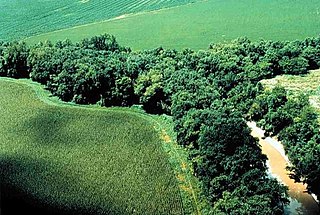 Deer Creek is a 60-mile-long (97 km) southwestward-flowing stream in Northern California that flows through Tehama County, California. It is an eastside tributary of the Sacramento River. As one of only three remaining Sacramento River tributaries supporting native runs of the genetically distinct Central Valley spring-run Chinook salmon, it is a stronghold for this state and federally endangered fish as well as other salmonids. 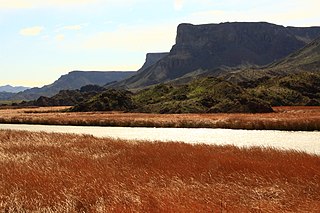 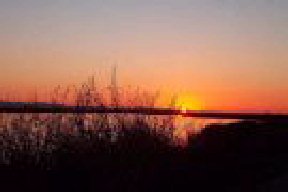 The Cosumnes River Preserve is a nature preserve of over 51,000 acres (210 km2) located 20 miles (30 km) south of Sacramento, in the US state of California. The preserve protects a Central Valley remnant that once contained one of the largest expanses of oak tree savanna, riparian oak forest and wetland habitat in North America. Agricultural development has changed the landscape from groves of oaks and tule marshes to productive farmlands. 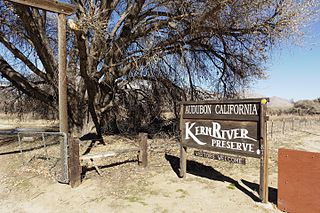 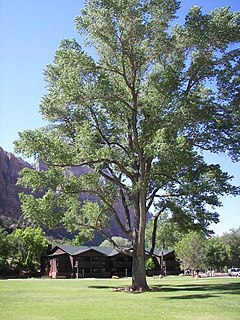 Populus fremontii, commonly known as Frémont's cottonwood, is a cottonwood native to riparian zones of the Southwestern United States and northern through central Mexico. It is one of three species in Populus sect. Aigeiros. The tree was named after 19th century American explorer and pathfinder John C. Frémont.

Desert riparian is a North American desert vegetation type occurring in the bottoms of canyons and drainages that have water at or near the surface most of the year. It is contrasted with the desert dry wash vegetation type in which water at or near the surface is lacking most of the year. The visual character is of large, lush, perennial green trees surrounded by dry desert vegetation and soil coloration. The area may be in a patch surrounding a spring (oasis), or in a strand following the course of water flow. The soil in this biome is typically moist and ranges from rocky and sandy to silty alluvial. This biome has seasonal variation, with hot, dry summers and cool, moist winters. Precipitation mostly occurs during the winter, and ranges from 8 to 25 cm each year.

Bushy Lake is a small lake located in Sacramento, California along the American River Parkway. The area is part of an ongoing restoration project, it also provides habitat to wildlife and offers nearby recreation opportunities. The area is prone to drought, erosion, species invasion, fire, and groups of transient populations. In the American River Parkway Plan, the lake is designated as a Nature Study Area and further protected by the Bushy Lake Preservation Act.