Cardamom ( /ˈkɑːrdəməm/ ), sometimes cardamon or cardamum, [1] is a spice made from the seeds of several plants in the genera Elettaria and Amomum in the family Zingiberaceae. Both genera are native to the Indian subcontinent and Indonesia. They are recognized by their small seed pods: triangular in cross-section and spindle-shaped, with a thin, papery outer shell and small, black seeds; Elettaria pods are light green and smaller, while Amomum pods are larger and dark brown.

Species used for cardamom are native throughout tropical and subtropical Asia. The first references to cardamom are found in Sumer, and in the Ayurvedic literatures of India. [2] Nowadays, it is also cultivated in some other countries, such as Guatemala, Malaysia and Tanzania. [3] The German coffee planter Oscar Majus Kloeffer introduced Indian cardamom to cultivation in Guatemala before World War I; by 2000, that country had become the biggest producer and exporter of cardamom in the world, followed by India. [4]

Cardamom is the world's third-most expensive spice, surpassed in price per weight only by vanilla and saffron. [5]

The word "cardamom" is derived from the Latin cardamomum, [6] which is the Latinisation of the Greek καρδάμωμον (kardamomon), [7] a compound of κάρδαμον (kardamon), "cress" [8] + ἄμωμον (amomon), which was probably the name for a kind of Indian spice plant. [9] The earliest attested form of the word κάρδαμον signifying "cress" is the Mycenaean Greek ka-da-mi-ja, written in Linear B syllabic script, [10] in the list of flavourings on the "Spice" tablets found among palace archives in the House of the Sphinxes in Mycenae. [11] The modern genus name Elettaria is derived from the root ēlam attested in Dravidian languages. [12]

The two main types of cardamom are:

The two types of cardamom, κάρδαμομον and ἄμωμον, were distinguished in the fourth century BCE by the Greek father of botany, Theophrastus. Theophrastus and informants knew that these varieties were originally and solely from India. [15]

Both forms of cardamom are used as flavourings and cooking spices in both food and drink, and as a medicine. E. cardamomum (green cardamom) is used as a spice, a masticatory, and in medicine; it is also smoked. [16]

Cardamom has a strong, unique taste, with an intensely aromatic, resinous fragrance. Black cardamom has a distinctly more smoky, though not bitter, aroma, with a coolness some consider similar to mint.

Green cardamom is one of the most expensive spices by weight [17] but little is needed to impart flavour. It is best stored in the pod, as exposed or ground seeds quickly lose their flavour. Grinding the pods and seeds together lowers both the quality and the price. For recipes requiring whole cardamom pods, a generally accepted equivalent is 10 pods equals ​1 1⁄2 teaspoons of ground cardamom.

It is a common ingredient in Indian cooking. It is also often used in baking in the Nordic countries, in particular in Sweden, Norway, and Finland, where it is used in traditional treats such as the Scandinavian Yule bread Julekake, the Swedish kardemummabullar sweet bun, and Finnish sweet bread pulla . In the Middle East, green cardamom powder is used as a spice for sweet dishes, as well as traditional flavouring in coffee and tea. Cardamom is used to a wide extent in savoury dishes. In some Middle Eastern countries, coffee and cardamom are often ground in a wooden mortar, a mihbaj , and cooked together in a skillet, a mehmas, over wood or gas, to produce mixtures as much as 40% cardamom.

In Asia, both types of cardamom are widely used in both sweet and savory dishes, particularly in the south. Both are frequent components in spice mixes, such as Indian and Nepali masalas and Thai curry pastes. Green cardamom is often used in traditional Indian sweets and in masala chai (spiced tea). Both are also often used as a garnish in basmati rice and other dishes. Individual seeds are sometimes chewed and used in much the same way as chewing gum. It is used by confectionery giant Wrigley; its Eclipse Breeze Exotic Mint packaging indicates the product contains "cardamom to neutralize the toughest breath odors". It is also included in aromatic bitters, gin, and herbal teas.

By the early 21st century, Guatemala had become the largest producer of cardamom in the world, with an average annual yield between 25,000 and 29,000 tonnes. The plant was introduced there in 1914 by Oscar Majus Kloeffer, a German coffee planter. [4] [19] India, formerly the largest producer, since 2000 has been the second worldwide, [19] generating around 15,000 tonnes annually. [20]

Increased demand since the 1980s, principally from China, for both A. villosum and A. tsao-ko, has been met by farmers living at higher altitudes in localized areas of China, Laos, and Vietnam, people typically isolated from many other markets. [21] [22] [23] 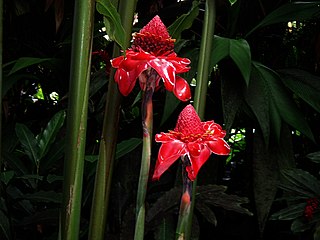 Zingiberaceae or the ginger family is a family of flowering plants made up of about 50 genera with a total of about 1600 known species of aromatic perennial herbs with creeping horizontal or tuberous rhizomes distributed throughout tropical Africa, Asia, and the Americas. 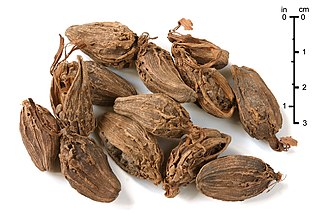 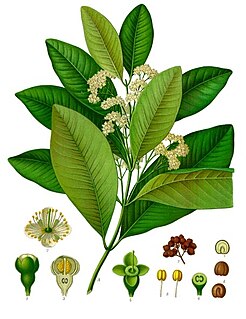 Allspice, also known as Jamaica pepper, myrtle pepper, pimenta, or pimento, is the dried unripe berry of Pimenta dioica, a midcanopy tree native to the Greater Antilles, southern Mexico, and Central America, now cultivated in many warm parts of the world. The name "allspice" was coined as early as 1621 by the English, who valued it as a spice that combined the flavour of cinnamon, nutmeg, and clove. 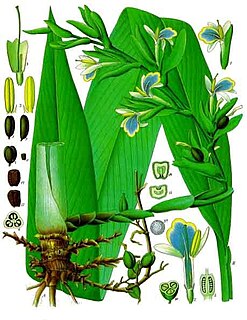 Elettaria is a genus of flowering plants in the family Zingiberaceae. They are native to India and Sri Lanka, but cultivated and naturalized elsewhere. One member of the genus, E. cardamomum, is a commercially important spice used as a flavouring agent in many countries. 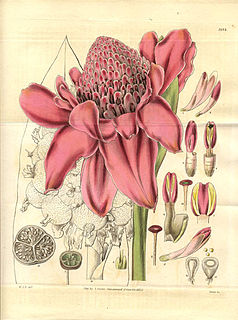 Amomum is a genus of plants native to China, the Indian subcontinent, Southeast Asia, New Guinea, and Queensland. It includes several species of cardamom, especially black cardamom. Plants of this genus are remarkable for their pungency and aromatic properties. 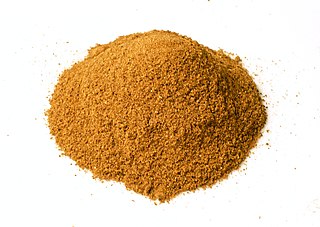 Berbere, is a spice mixture whose constituent elements usually include chili peppers, coriander, garlic, ginger, basil, korarima, rue, ajwain or radhuni, nigella, and fenugreek. It is a key ingredient in the cuisines of Ethiopia and Eritrea.

Elettaria cardamomum, commonly known as green or true cardamom, is a herbaceous, perennial plant in the ginger family, native to southern India. It is the most common of the species whose seeds are used as a spice called cardamom. It is cultivated widely in tropical regions and reportedly naturalized in Réunion, Indochina, and Costa Rica.

Cardamom may refer to: 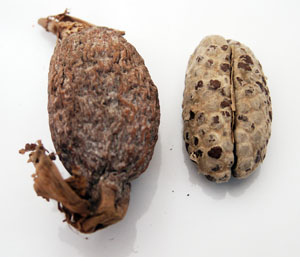 Alligator pepper is a West African spice made from the seeds and seed pods of Aframomum danielli, A. citratum or A. exscapum. It is a close relative of grains of paradise, obtained from the closely related species, Aframomum melegueta. Unlike grains of paradise, which are generally sold as only the seeds of the plant, alligator pepper is sold as the entire pod containing the seeds. 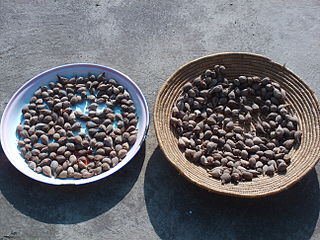 Aframomum corrorima is a species in the ginger family, Zingiberaceae. The spice, known as Ethiopian cardamom, false cardamom, or korarima, is obtained from the plant's seeds, and is extensively used in Ethiopian and Eritrean cuisine. It is an ingredient in berbere, mitmita, awaze, and other spice mixtures, and is also used to flavor coffee. In Ethiopian herbal medicine, the seeds are used as a tonic, carminative, and laxative. 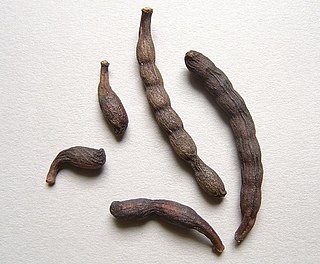 Grains of Selim are the seeds of a shrubby tree, Xylopia aethiopica, found in Africa. The seeds have a musky flavor and are used as a spice in a manner similar to black pepper, and as a flavouring agent that defines café Touba, the dominant style of coffee in Senegal. It is also known as Kani pepper, Senegal pepper, Ethiopian pepper, and (historically) Moor pepper and Negro pepper. It also has many names in native languages of Africa, the most common of which is djar in the Wolof language. It is called 'Etso' in the Ewe language of Ghana. It is sometimes referred to as African pepper or Guinea pepper, but these are ambiguous terms that may refer to Ashanti pepper and grains of paradise, among others. 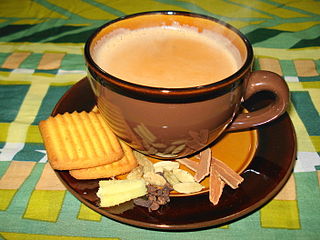 Masala chai is a flavoured tea beverage made by brewing black tea with a mixture of aromatic Indian spices and herbs. Originating in the Indian subcontinent, the beverage has gained worldwide popularity, becoming a feature in many coffee and tea houses. Although traditionally prepared as a decoction of green cardamom pods, cinnamon sticks, ground cloves, ground ginger, and black peppercorn together with black tea leaves, retail versions include tea bags for infusion, instant powdered mixtures, and concentrates. 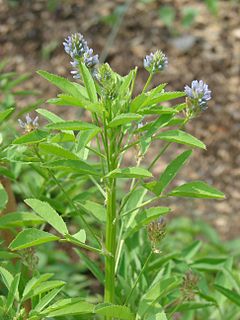 Trigonella caerulea is an annual herb in the family Fabaceae. It is 30–60 cm tall. Its leaves are obovate or lance-shaped, 2–5 cm long, 1–2 cm wide and saw-toothed in upper part. Its flower stalks are compact, globular racemes, longer than the leaves. The sepals are twice as short as the corolla, its teeth are equal to the tube. The corolla is 5.5-6.5 mm long and blue. The pods are erect or slightly curved, compressed, 4–5 mm long with beak 2 mm. The seeds are small and elongated. It blossoms in April–May, the seeds ripen in May–June. It is self-pollinated.

Cardamom production employs plants of the genera Elettaria and Amomum in the ginger family Zingiberaceae. Cultivation of cardamom was introduced to Guatemala before World War I by Oscar Majus Kloeffer; today Guatemala is the world's biggest producer and exporter, followed by India and Sri Lanka. Saudi Arabia and Kuwait are the leading importers of the spice. After saffron and vanilla, cardamom is the third most expensive spice by weight. 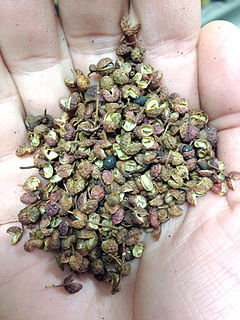 Sichuan pepper is a spice from the Sichuan cuisine of China's southwestern Sichuan Province. It has a unique aroma and flavor that is neither hot like chili peppers nor pungent like black pepper. Instead, it has slight lemony overtones and creates a tingly numbness in the mouth due to hydroxy-α-sanshool. It is commonly used in Sichuanese dishes such as mapo doufu and Chongqing hot pot, and is often added together with chili peppers to create a flavor known in Mandarin as málà. 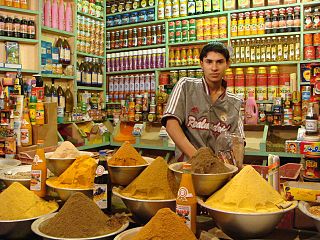 Spices have been around in conjunction with human use for millennia, many civilizations in antiquity used a variety of spices for their common qualities. The variety of spices were used for common purposes among the ancient world, and they were also used to create a variety of products designed to enhance or suppress certain sensations. Spices were also associated with certain rituals to perpetuate a superstition, or fulfill a religious obligation, among other things.

Amomum ovoideum is a widespread shade-demanding rhizomatous herb of the ginger family (Zingiberaceae) native to Southeast Asia. It is perennial, producing leafy stems up to 3 m (9.8 ft) tall from a subterranean, long, and much-branched rhizome. The plant bears fruits up to 2 cm (0.79 in) long, covered by slender, soft, red spines. When dried, the fruit produces cardamom seedpods similar to other cardamom spice plants.