Carl Erich Correns (19 September 1864 [2] – 14 February 1933) was a German botanist and geneticist, who is notable primarily for his independent discovery of the principles of heredity, which he achieved simultaneously but independently of the botanist Hugo de Vries and for his rediscovery of Gregor Mendel's earlier paper on that subject.

Correns was a student of Karl Nägeli, a renowned botanist with whom Mendel corresponded about his work with peas, and who subsequently engaged in a long exchange of letters concerning reproducibility of the results in another species (Hieracium). Because of the special properties of Hieracium, those experiments failed and Mendel dropped his studies on the subject.

Carl Correns was born September 1864 in Munich. Orphaned at an early age, he was raised by an aunt in Switzerland. He entered the University of Munich in 1885. While there, he was encouraged to study botany by Karl Nägeli. After completing his thesis, Correns became a tutor at the University of Tübingen and in 1913 he became the first director of the newly founded Kaiser Wilhelm Institute for Biology in Berlin-Dahlem. He married a niece of Karl Nägeli, Elisabeth Widmer.

Carl Correns conducted much of the foundational work for the field of genetics at the turn of the 20th century. He rediscovered and independently verified the work of Mendel in a separate model organism. He also discovered cytoplasmic inheritance, an important extension of Mendel's theories, which demonstrated the existence of extra-chromosomal factors on phenotype. Some of his unpublished work and most of his lab books were destroyed in the Berlin bombings of 1945.

In 1892, while at the University of Tübingen, Correns began to experiment with trait inheritance in plants. Correns published his first paper on 25 January 1900, which cited both Charles Darwin and Mendel, recognising the relevance of genetics to Darwin's ideas. In Correns' paper, "G. Mendel's Law Concerning the Behavior of the Progeny of Racial Hybrids", he restated Mendel's results as the' law of segregation' and introduced a new 'law of independent assortment'. [3] [4] [5] [6] [7] [8] [9] [10]

After rediscovering Mendel's laws of heredity, which can be explained with chromosomal inheritance, he undertook experiments with the four o'clock plant Mirabilis jalapa to investigate apparent counterexamples to Mendel's laws in the heredity of variegated (green and white mottled) leaf color. Correns found that, while Mendelian traits behave independently of the sex of the source parent, leaf color depended greatly on which parent had which trait. For instance, pollinating an ovule from a white branch with pollen from another white area resulted in white progeny, the predicted result for a recessive gene. Green pollen used on a green stigma resulted in all green progeny, the expected result for a dominant gene. However, if green pollen fertilized a white stigma, the progeny were white, but if the sexes of the donors were reversed (white pollen on a green stigma), the progeny were green.

This non-mendelian inheritance pattern was later traced to a gene named iojap which codes for a small protein required for proper assembly of the chloroplast ribosome. Even though iojap assorts according to Mendel's rules, if the mother is homozygous recessive, then the protein is not produced, the chloroplast ribosomes fail to form, and the plasmid becomes non-functional because the ribosomes cannot be imported into the organelle. The progeny could have functional copies of iojap, but since the chloroplasts come exclusively from the mother in most angiosperms, they would have been inactivated in the previous generation, and so will give white plants. Conversely, if a white father is paired with a green mother with functional chloroplasts, the progeny will only inherit functional chloroplasts, and will thus be green. In his 1909 paper, he established variegated leaf color as the first conclusive example of cytoplasmic inheritance.

The standard author abbreviation Correns is used to indicate this person as the author when citing a botanical name. [11]

Genetics is a branch of biology concerned with the study of genes, genetic variation, and heredity in organisms. 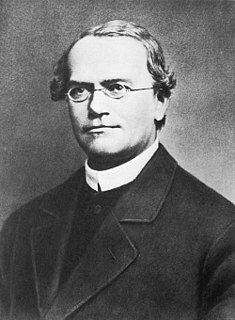 Gregor Johann Mendel was a scientist, Augustinian friar and abbot of St. Thomas' Abbey in Brno, Margraviate of Moravia. Mendel was born in a German-speaking family in the Silesian part of the Austrian Empire and gained posthumous recognition as the founder of the modern science of genetics. Though farmers had known for millennia that crossbreeding of animals and plants could favor certain desirable traits, Mendel's pea plant experiments conducted between 1856 and 1863 established many of the rules of heredity, now referred to as the laws of Mendelian inheritance.

Heredity, also called inheritance or biological inheritance, is the passing on of traits from parents to their offspring; either through asexual reproduction or sexual reproduction, the offspring cells or organisms acquire the genetic information of their parents. Through heredity, variations between individuals can accumulate and cause species to evolve by natural selection. The study of heredity in biology is genetics.

Mendelian inheritance is a type of biological inheritance that follows the principles originally proposed by Gregor Mendel in 1865 and 1866, re-discovered in 1900 and popularised by William Bateson. These principles were initially controversial. When Mendel's theories were integrated with the Boveri–Sutton chromosome theory of inheritance by Thomas Hunt Morgan in 1915, they became the core of classical genetics. Ronald Fisher combined these ideas with the theory of natural selection in his 1930 book The Genetical Theory of Natural Selection, putting evolution onto a mathematical footing and forming the basis for population genetics within the modern evolutionary synthesis.

Genetic linkage is the tendency of DNA sequences that are close together on a chromosome to be inherited together during the meiosis phase of sexual reproduction. Two genetic markers that are physically near to each other are unlikely to be separated onto different chromatids during chromosomal crossover, and are therefore said to be more linked than markers that are far apart. In other words, the nearer two genes are on a chromosome, the lower the chance of recombination between them, and the more likely they are to be inherited together. Markers on different chromosomes are perfectly unlinked. 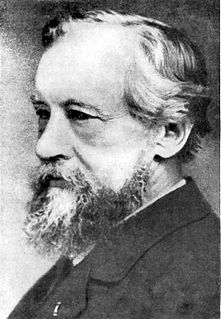 Hugo Marie de Vries was a Dutch botanist and one of the first geneticists. He is known chiefly for suggesting the concept of genes, rediscovering the laws of heredity in the 1890s while apparently unaware of Gregor Mendel's work, for introducing the term "mutation", and for developing a mutation theory of evolution. 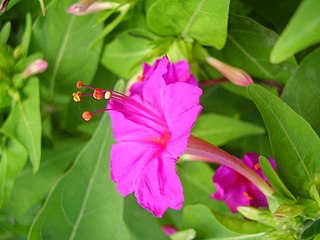 Non-Mendelian inheritance is any pattern of inheritance in which traits do not segregate in accordance with Mendel's laws. These laws describe the inheritance of traits linked to single genes on chromosomes in the nucleus. In Mendelian inheritance, each parent contributes one of two possible alleles for a trait. If the genotypes of both parents in a genetic cross are known, Mendel's laws can be used to determine the distribution of phenotypes expected for the population of offspring. There are several situations in which the proportions of phenotypes observed in the progeny do not match the predicted values.

Reginald Crundall Punnett FRS was a British geneticist who co-founded, with William Bateson, the Journal of Genetics in 1910. Punnett is probably best remembered today as the creator of the Punnett square, a tool still used by biologists to predict the probability of possible genotypes of offspring. His Mendelism (1905) is sometimes said to have been the first textbook on genetics; it was probably the first popular science book to introduce genetics to the public.

Erwin Baur was a German geneticist and botanist. Baur worked primarily on plant genetics. He was director of the Kaiser Wilhelm Institute for Breeding Research. Baur is considered to be the father of plant virology. He discovered the inheritance of plastids.

Tracy Morton Sonneborn was an American biologist. His life's study was of the protozoan group Paramecium.

Lucien Claude Marie Julien Cuénot was a French biologist. In the first half of the 20th century, Mendelism was not a popular subject among French biologists. Cuénot defied popular opinion and shirked the “pseudo-sciences” as he called them. Upon the rediscovery of Mendel's work by Correns, De Vries, and Tschermak, Cuénot proved that Mendelism applied to animals as well as plants. 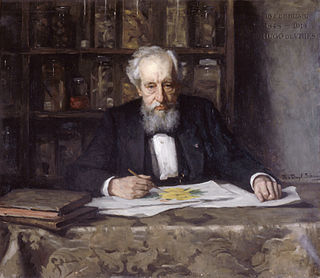 Mutationism is one of several alternatives to evolution by natural selection that have existed both before and after the publication of Charles Darwin's 1859 book, On the Origin of Species. In the theory, mutation was the source of novelty, creating new forms and new species, potentially instantaneously, in sudden jumps. This was envisaged as driving evolution, which was thought to be limited by the supply of mutations. 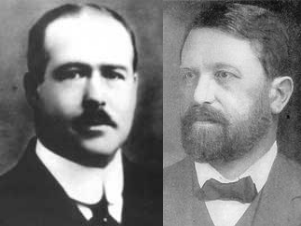 The Boveri–Sutton chromosome theory is a fundamental unifying theory of genetics which identifies chromosomes as the carriers of genetic material. It correctly explains the mechanism underlying the laws of Mendelian inheritance by identifying chromosomes with the paired factors (particles) required by Mendel's laws. It also states that chromosomes are linear structures with genes located at specific sites called loci along them. 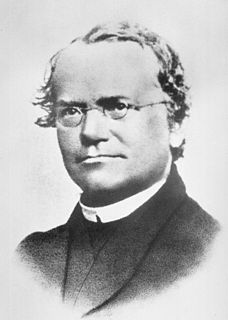 Particulate inheritance is a pattern of inheritance discovered by Mendelian genetics theorists, such as William Bateson, Ronald Fisher or Gregor Mendel himself, showing that phenotypic traits can be passed from generation to generation through "discrete particles" known as genes, which can keep their ability to be expressed while not always appearing in a descending generation.

Classical genetics is the branch of genetics based solely on visible results of reproductive acts. It is the oldest discipline in the field of genetics, going back to the experiments on Mendelian inheritance by Gregor Mendel who made it possible to identify the basic mechanisms of heredity. Subsequently, these mechanisms have been studied and explained at the molecular level. 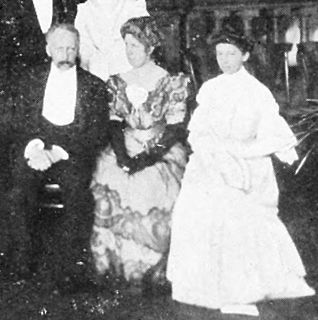 Florence Margaret Durham was a British geneticist at Cambridge in the early 1900s and an advocate of the theory of Mendelian inheritance, at a time when it was still controversial. She was part of an informal school of genetics at Cambridge led by her brother-in-law William Bateson. Her work on the heredity of coat colours in mice and canaries helped to support and extend Mendel's law of heredity. It is also one of the first examples of epistasis.