Carl Engel (July 21, 1883 – May 6, 1944) was a French-born American pianist, composer, musicologist and publisher from Paris. He was also president of G. Schirmer, Inc., a writer on music for The Musical Quarterly, and chief of the Music Division of the Library of Congress.

William "Tell" Taylor (aka TellienéTell Roberts;. Tell was born 28 October 1876 to Clarinda Jane Roberts and John Asbury Taylor, on a farm near the Village of Vanlue, Amanda Township, Hancock County, Ohio. He was an American traveling vaudeville performer, tenor vocalist, playwright, music publisher, composer, and lyricist who had written over 200 popular songs. His biggest hit was "Down by the Old Mill Stream" from 1910, one of the most commercially successful Tin Pan Alley publications of the era. The song was published by Forster Music Publisher, Inc. of Chicago. Taylor performed vaudeville theaters and founded a Chicago music publishing house bearing his name. His other notable songs include "He Sleeps Beneath the Soil of France," "I Love You Best of All," "If Dreams Come True," "Little Old Home in the Valley," "Rock Me to Sleep in the Old Rocking Chair," "Some Day," and "When the Maple Leaves Were Falling." Taylor also wrote the Broadway comedies Tiger Lillee and In New York Town. 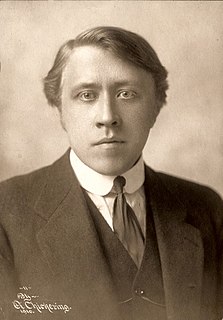 Augusta Mary Anne Holmès was a French composer of Irish descent. In 1871, Holmès became a French citizen and added the accent to her last name. She wrote the texts to almost all of her vocal music herself, including songs, oratorios, the libretto of her opera La Montagne noire and the programmatic poems for her symphonic poems including Irlande and Andromède.

James Reese Europe, sometimes known as Jim Europe, was an American ragtime and early jazz bandleader, arranger, and composer. He was the leading figure on the African Americans music scene of New York City in the 1910s. Eubie Blake called him the "Martin Luther King of music".

Norman Dello Joio was an American composer whose output spanned over half a century, and who won a Pulitzer Prize in 1957.

Charles Wakefield Cadman was an American composer. For 40 years he worked closely with Nelle Richmond Eberhart, who wrote most of the texts to his songs, including Four American Indian Songs. She also wrote the librettos for his five operas, two of which were based on Indian themes. He composed in a wide variety of genres.

Katherine Kennicott Davis was an American former teacher, who was a classical music composer, pianist, and author of the famous Christmas tune "The Little Drummer Boy". 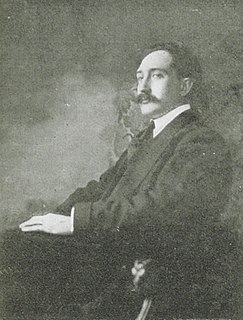 Georges Elbert Migot was a prolific French composer. Though primarily known as a composer, he was also a poet, often integrating his poetry into his compositions, and an accomplished painter. He won the 1921 Prix Blumenthal.

Harry David Kerr was an American songwriter, lyricist, author, and lawyer. Kerr became active in music at age 15 (1895). The practice of law had been his prime avocation until 1920, when he decided to focus on songwriting. But he still continued to use his legal training in music. In 1922, while living in New York City, Kerr prepared the incorporation documents for the American Society of Composers, Authors and Publishers (ASCAP), of which he had become one of 90 charter members at its founding in 1914.

George Arthurs was an English songwriter, playwright, composer, author and screenwriter who contributed lyrics to several successful musical comedies such as The Belle of Mayfair (1906), Havana (1908) and Yes, Uncle! (1917), before writing dialogue for such films as The Yellow Mask (1931).