Carl Hiaasen ( /ˈhaɪ.əsɛn/ ; born March 12, 1953) is an American journalist and novelist. He began his career as a newspaper reporter and by the late 1970s had begun writing novels in his spare time, both for adults and for young-adult readers. Two of his novels have been made into feature films.

Hiaasen's adult novels are humorous crime thrillers set in Florida. They feature casts of eccentric, sometimes grotesque characters and satirize aspects of American popular culture. Many of the novels include themes related to environmentalism and political corruption in his native state.

Hiaasen was born in 1953 and raised in Plantation, Florida, then a rural suburb of Fort Lauderdale. He was the first of four children born to Odel and Patricia Hiaasen. He has Norwegian and Irish ancestry. He started writing at age six when his father bought him a typewriter for Christmas [2] After graduating from Plantation High School in 1970,[ citation needed ] he entered Emory University, where he contributed satirical humor columns to the student-run newspaper The Emory Wheel . [3] In 1972, he transferred to the University of Florida, where he wrote for The Independent Florida Alligator . Hiaasen graduated in 1974 with a degree in journalism.

He was a reporter at TODAY (Cocoa, Florida) for two years before being hired in 1976 by the Miami Herald , where he worked for the city desk, Sunday magazine and award-winning investigative team. Hiaasen was a columnist for the newspaper from mid-1985 until March 2021. His columns have been collected in three published volumes, Kick Ass (1999), Paradise Screwed (2001) and Dance of the Reptiles (2014), all edited by Diane Stevenson.

His only brother was Rob Hiaasen, an editor and columnist at The Capital newspaper in Annapolis, Maryland, who was killed in a mass shooting at the newspaper's office on June 28, 2018. [4] Carl Hiaasen's 1991 novel Native Tongue bears the dedication "For my brother Rob." Finally, On March 15, 2021, he retired from his career at Miami Herald after 35 years of writing for the Florida newspaper. [5]

After becoming a reporter, Hiaasen began writing novels in his spare time. The first three were co-authored with his friend and fellow journalist William Montalbano: Powder Burn (1981), Trap Line (1982), and A Death in China (1984). His first solo novel, Tourist Season (1986), featured a group of ragged eco-warriors who kidnap the Orange Bowl Queen in Miami. The book's main character was whimsically memorialized by Jimmy Buffett in a song called "The Ballad of Skip Wiley," which appeared on his Barometer Soup album.

In all, twenty of Hiaasen's novels and nonfiction books have been on the New York Times Best Seller lists. His work has been translated into 34 languages.

His first venture into writing for younger readers was the 2002 novel Hoot , which was named a Newbery Medal honor book. It was adapted as a 2006 film of the same name (starring Logan Lerman, Brie Larson and Luke Wilson). The movie was written and directed by Wil Shriner. Jimmy Buffett provided songs for the soundtrack, and appeared in the role of Mr. Ryan, a middle school teacher.

Hiaasen's subsequent children's novels were Flush, Scat ; Chomp and, Skink-- No Surrender, which introduces one of his most popular adult characters to teen readers. In 2014, Skink was long-listed for a National Book Award in Young People's Literature. All of Hiaasen's books for young readers feature environmental themes, eccentric casts and adventure-filled plots. His newest, Squirm, which is set in Florida and Montana, was published in the fall of 2018 and opened at #4 on the New York Times bestseller list for middle-grade novels.

His previous novel for adults, Razor Girl, was published by Alfred A. Knopf in September 2016, and opened at #2 on the New York Times bestseller list. In England it was short-listed for the Bollinger Everyman Wodehouse award for comic fiction.

His latest adult book, Squeeze Me, was published on August 25, 2020 and debuted at #2 on the New York Times Combined Print and E-Book Print Best Sellers List. The novel takes place during the glitzy Palm Beach social season, and features wild pythons and a fictional, well-fed U.S. president who has a vacation mansion on the island. Amazon and the Washington Post listed Squeeze Me as one of the best novels of 2020.

Hiaasen's most recent nonfiction work is Assume the Worst: The Graduation Speech You'll Never Hear, which was published in April 2018 and illustrated by Roz Chast, who is well-known for her cartoons in the New Yorker magazine.

During the 1990s Hiaasen co-wrote the lyrics of three songs with his good friend and famed L.A. rocker, the late Warren Zevon. "Rottweiler Blues" and "Seminole Bingo" appeared on Zevon's Mutineer album in 1995. The third song they wrote together, "Basket Case," was done in conjunction with Hiaasen's novel of the same name, and appeared in 2001 on Zevon's album My Ride's Here.

David McAlister Barry is an American author and columnist who wrote a nationally syndicated humor column for the Miami Herald from 1983 to 2005. He has also written numerous books of humor and parody, as well as comic novels. Barry's honors include the Pulitzer Prize for Commentary (1988) and the Walter Cronkite Award for Excellence in Journalism (2005).

Tourist Season is a 1986 novel by Carl Hiaasen. It was his first solo novel, after co-writing several mystery/thriller novels with William Montalbano.

Skinny Dip is a caper novel by Carl Hiaasen first published in 2004. It is his 11th work of fiction for adult readers. It is his fifth book featuring the character known as "Skink" and his second novel including the character Mick Stranahan, a former detective. It involves a murder plot and a subsequent attempt to exact revenge against the backdrop of a threat to Florida's Everglades National Park.

Hoot may refer to:

Hoot is a 2002 mystery/suspense novel, recommended for ages 9–12, by Carl Hiaasen. The setting takes place in Florida, where new arrival Roy makes two oddball friends and a bad enemy, and joins an effort to stop construction of a pancake house which would destroy a colony of burrowing owls who live on the site. The book won a Newbery Honor award in 2003.

Basket Case, published in 2002, is the ninth novel by Carl Hiaasen. It is a crime novel set in Florida that centers on the death of singer Jimmy Stoma, the former lead man of "Jimmy and the Slut Puppies". This novel marks the first time Hiaasen used first-person point of view to deliver the novel. In previous works, he used third-person view.

Kick Ass is the first of three books which highlight some of Carl Hiaasen's best columns in the newspaper Miami Herald. It was published in 1999, and followed by Paradise Screwed: Selected Columns (2001) and Dance of the Reptiles (2014).

Stormy Weather is a 1995 novel by Carl Hiaasen. It takes place in the chaotic aftermath of Hurricane Andrew in South Florida and concerns the tragic effects of the disaster, including insurance scams, street fights, hunt for food and shelter, corrupt bureaucracy, a ravaged environment and disaster tourists.

Clinton Tyree, a.k.a. Skink, is a fictional character who has appeared in several novels by Carl Hiaasen, beginning with Double Whammy in 1987. He is a former governor of Florida who suddenly abandoned his office to live in the wilderness, most often the Everglades and, later, the Florida Keys. Tyree is depicted as a skilled outdoorsman, a partaker of roadkill cuisine, and a fierce and slightly unhinged opponent of sprawl and overdevelopment in the state. 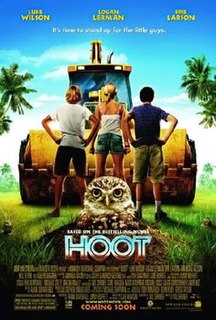 Hoot is a 2005 American family comedy film, based on Carl Hiaasen's novel of the same name. It was written and directed by Wil Shriner, and produced by New Line Cinema and Walden Media. The film stars Luke Wilson, Logan Lerman, Brie Larson, Tim Blake Nelson, Neil Flynn and Robert Wagner. Filming took place from July to September 2005 in Florida, with additional shooting in California the following January. The film was released on May 5, 2006. Hoot was a box office bomb, and received mixed reviews from critics.

Double Whammy is a 1987 novel by Carl Hiaasen. The protagonist, a private investigator, is hired to expose a celebrity bass fisherman as a cheat and is drawn into a frame-up for murder. The book introduced the character of "Skink", who becomes a recurring character in Hiaasen's subsequent novels.

Native Tongue is a novel by Carl Hiaasen, published in 1991. Like all his novels, it is set in Florida. The themes of the novel include corruption, environmentalism, exploitation of endangered species, and animal rights. 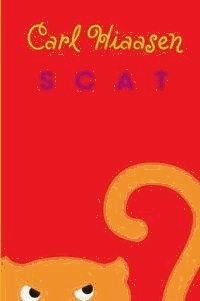 Scat is a teenage novel by Carl Hiaasen, published in 2009. Scat, Hiaassen's third young adult novel, tells the mystery of a missing teacher named Mrs. Bunny Starch, and how two of her students, Nick Waters and Marta Gonzalez, will do everything they can to find her. They try their best in finding what had happened to their teacher while they are at the field trip. The book is available in over 1,000 libraries and was well-received when it came out, with a positive review in the New York Times.

Oscar Jose Corral is a Cuban-American journalist and filmmaker. In 2012, Corral directed and produced a documentary film, Tom Wolfe Gets Back to Blood, which enjoyed a national run on PBS and was screened in more than 40 independent theaters around the country. It is the only film ever made about Tom Wolfe, an iconic author and satirist whose stature in American letters has loomed large for the last half century. The film is about how Wolfe researched his Miami-set novel, Back to Blood, in South Florida. 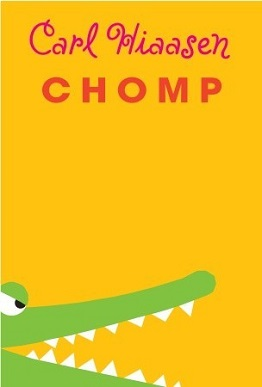 Chomp is a young adult novel by Carl Hiaasen first published in 2012, and set in Hiaasen's native Florida. It is his fourth young adult novel. His previous three, also about Florida wildlife, are Hoot, Flush and Scat.

Skink - No Surrender is a young adult novel by Carl Hiaasen, published on September 23, 2014. It is described as Hiaasen's first young adult novel. He has authored four previous novels for "young" readers. Like all of his novels, it is set in Hiaasen's native Florida. 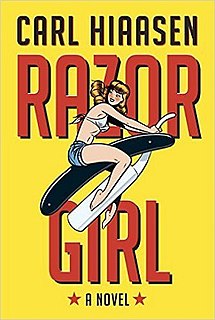 Rob Hiaasen was an American journalist and assistant editor at The Capital, a newspaper published in Annapolis, Maryland. He also taught at the University of Maryland's Philip Merrill College of Journalism. A native of Plantation, then a rural suburb of Fort Lauderdale, Florida, Hiaasen began his career at The Palm Beach Post before joining The Baltimore Sun as a feature writer and where he later wrote a regular column. He was shot and killed at work at The Capital during the Capital Gazette shooting.