He was born at Karlberg Castle, Stockholm on 21 March 1833 and died at Frösundavik near Stockholm on 13 June 1878. [1] He was the son of architect, author and officer Carl Stål then Colonel, Swedish Corps of Engineers. [2] He matriculated at Uppsala University in 1853, studying medicine and passing the medico-philosophical examination in 1857. He then turned to entomology and completed his Ph.D at the University of Jena in 1859. The same year he became assistant to Carl Henrik Boheman in the Zoological department of the Swedish Museum of Natural History in Stockholm, where, in 1867, he was appointed keeper with the title of professor.

He made collecting trips in Sweden and throughout Europe and visited other museums including the collection of Johan Christian Fabricius in Kiel. His study of the Fabrician types resulted in his "Hemiptera Fabriciana". A significant part of Stål's work was the study of insects collected from Caffraria, the majority of which were poorly understood at the time.

Although Stål, who was regarded as the world's foremost worker on Hemiptera, published most on this order, he also worked on Orthoptera and to a lesser extent on Coleoptera and Hymenoptera, naming well over 1000 new genera and over 1500 new species over his brief career.

In 1869, he was elected a member of the Royal Swedish Academy of Sciences.

Adolph Modéer (1738–1799) was a Swedish surveyor, economic historian and naturalist. As a naturalist he was mainly interested in malacology and entomology. He also worked on jellyfish. As an economic historian, he wrote on the history of Sweden's trade.

Gelonus is a genus of leaf-footed bug (Coreidae) in Tasmania, one of the few Coreidae that feeds on eucalypts. It is a member of the Amorbini tribe, but has only a single genus, Gelonus tasmanicus(Le Guillou, 1841).

Johan Wilhelm Dalman was a Swedish physician and a naturalist. He first studied at Christiansfeld in Schleswig-Holstein then at the University of Lund and the University of Uppsala. He was mainly interested in entomology and botany. He received his degree in 1816 then his doctorate in 1817 from the University of Uppsala. Dalman became librarian of the Royal Swedish Academy of Sciences, a member of the Academy in 1821, then director of the zoological garden, then demonstrator in botany at the Karolinska Institutet of Stockholm.

Valvata aliena is a species of minute freshwater snail with an operculum, an aquatic gastropod mollusk in the family Valvatidae, the valve snails.

Margarites argentatus is a species of sea snail, a marine gastropod mollusk in the family Margaritidae.

Margarites striatus, common name the striate margarite, is a species of sea snail, a marine gastropod mollusk in the family Margaritidae.

Homalodisca is a genus of bugs in the family Cicadellidae and tribe Proconiini. It contains a significant pest species, the Glassy-winged sharpshooter.

Camerunia albida is a moth of the family Eupterotidae first described by Per Olof Christopher Aurivillius in 1901. It is found in Tanzania. 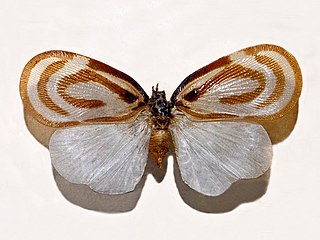 Steganocerus multipunctatus Thunberg 1783, or Ladybird Bug is a Sub-Saharan African member of the Hemiptera with a strong resemblance to a Ladybird. It is normally black with bright orange spots, but is quite variable in colour and may be brown without spots. It shares Müllerian mimicry with the Tortoise beetle Chiridopsis suffriani, and a spider Paraplectana thorntoni.

Veit Brecher Wittrock was a Swedish botanist known for his work in the field of phycology and for his research of the genus Viola.

Alistra is a genus of dwarf sheet spiders that was first described by Tamerlan Thorell in 1894.

Siphanta is a genus of plant-feeding insect in the family Flatidae. 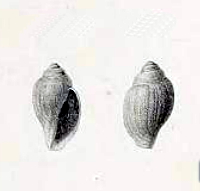 Oenopota morchi is a species of sea snail, a marine gastropod mollusk in the family Mangeliidae.

Pardosa elegans is a species of wolf spiders found in Russia.

Thasus acutangulus is an insect of the order Hemiptera, or the "true bugs". As a member of the family Coreidae, it is a leaf-footed bug. It was described by the Swedish entomologist Carl Stål in 1859.