Last updated November 21, 2021
In this Spanish name, the first or paternal surname is Rexachand the second or maternal family name is Cerdà.

His career was mainly associated to Barcelona, spending 44 years at the club as a player (youth levels included) and coach. [1] He formed a successful partnership with Johan Cruyff, both on and off the field, [2] [3] [4] and as a player appeared in 638 games and scored 197 goals, winning the Pichichi Trophy in 1971; he won a combined eight titles both capacities combined, including the La Liga championship in the 1973–74 season and the 1979 Cup Winners' Cup.

Rexach appeared for Spain at the 1978 World Cup, earning 15 caps in nine years.

Born in Pedralbes, Barcelona, Catalonia, [4] Rexach made his senior debut for FC Barcelona on 25 April 1965 after having joined their youth system as a 12-year-old, scoring once in a 4–0 away win against Racing de Santander for the Copa del Generalísimo. [5] His first appearance in La Liga took place on 10 September 1967, and he also found the net, but in a 2–3 away loss to Real Zaragoza; [6] additionally, he spent two years on loan to CD Condal, who acted as the farm team.

In the 1970–71 season, Rexach scored a career-best 17 goals to win the Pichichi Trophy alongside Atlético Madrid player José Eulogio Gárate. [7] His team finished in second position with the same points as champions Valencia CF, adding the domestic cup. [8]

On 5 November 1974, Rexach netted a hat-trick to help the hosts defeat Feyenoord 3–0 in the second round of the European Cup, after three assists from longtime teammate Johan Cruyff. [9] In the final of the 1978 Spanish Cup, he was chosen Man of the match after scoring twice in a 3–1 triumph over UD Las Palmas; [10] on 16 May of the following year, he contributed with one goal in the 4–3 extra time defeat of Fortuna Düsseldorf in the decisive match of the UEFA Cup Winners' Cup. [11]

Rexach retired in 1981 at the age of 34, and on 1 September, Barcelona played a testimonial match against Argentina at the Camp Nou. [12] He made his debut for the Spain national side on 23 April 1969, playing the second half of the 0–0 friendly draw to Mexico in Seville; [13] selected to the 1978 FIFA World Cup squad, he featured once in an eventual group stage exit. [14]

After retiring, Rexach joined the coaching staff at FC Barcelona B. In 1984, he co-founded the TARR football school in his native city with fellow ex-players Juan Manuel Asensi, Joaquim Rifé and Antoni Torres. [15]

Rexach joined Luis Aragonés's staff for the 1987–88 season, and briefly became caretaker manager when the latter departed after suffering a bout of depression. [16] When Cruyff was subsequently appointed, he remained an assistant. [17] [18] [4]

When chain smoker Cruyff needed emergency heart surgery during the 1990–91 campaign, Rexach once again stepped up, [19] leading the club to its 11th league title – his first game in charge was on 27 February 1991, in a 6–0 home win against Las Palmas for the domestic cup. [20] He remained in the position throughout the Dream Team era [21] and, after president Josep Lluís Nuñez sacked the Dutchman in May 1996, once again became head coach, a decision which allegedly cost him the friendship of Cruyff; [22] [23] after new manager Bobby Robson replaced him with José Mourinho as his assistant he became a scout, going on to be responsible for discovering Lionel Messi. [24]

In 1998, Rexach moved to the Yokohama Flügels. During his spell in the J.League, he worked with former Barcelona players Ion Andoni Goikoetxea and Julio Salinas. [25]

After Lorenzo Serra Ferrer was sacked by Barcelona towards the end of 2000–01, Rexach was named his successor. [26] In the last matchday, following a 3–2 home defeat of Valencia CF and courtesy of a Rivaldo 87th-minute wonder goal, they managed to qualify for the Champions League; [27] this resulted in him being appointed coach by Joan Gaspart for the following season, [28] but after being ousted by Real Madrid in the semi-finals of the Champions League, [29] by UE Figueres in the Spanish Cup [30] and having lost the final of the Copa Catalunya to CF Balaguer, [31] he was fired and replaced by a returning Louis van Gaal, continuing to work with the club in directorial capacities. [32]

On 8 April 2010, Rexach announced his intention to run for Barcelona's presidency, [33] Nothing came of it eventually, but he was nonetheless chosen by new chairman Sandro Rosell as sporting advisor alongside Josep Maria Fusté and Migueli. [34]

Sergi Barjuán Esclusa, known simply as Sergi as a player, is a Spanish former professional footballer who played as a left-back. He is the manager of Barcelona B.

Enrique Castro González, known as Quini[ˈkini], was a Spanish footballer who played as a striker. 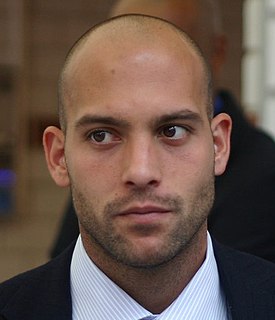 Gabriel Francisco García de la Torre, known as Gabri, is a Spanish retired footballer, and a manager, who is currently in charge of Lleida Esportiu. Mainly a midfielder who could play in the right or the middle, he could also appear as an attacking right back, tackling and passing skills being his main assets.

Julio Salinas Fernández is a Spanish former footballer who played during the 1980s and 1990s.

Guillermo Amor Martínez is a Spanish retired footballer who played as a versatile midfielder. He was responsible for FC Barcelona's youth system, as well as the director of institutional and sporting relations of the first team.

Roger García Junyent, known simply as Roger, is a Spanish former footballer who played mostly as a left midfielder. He possessed a strong shot, and was known for his passing ability.

Juan Manuel Asensi Ripoll is a Spanish retired footballer who played as an attacking midfielder.

Miguel Bernardo Bianquetti, known as Migueli, is a Spanish retired footballer who played as a central defender.

Carles Busquets Barroso is a Spanish former professional footballer who played as a goalkeeper, mostly for Barcelona.

Josep Moratalla Claramunt is a Spanish retired footballer who played as a central defender, and a coach.

Futbol Club Barcelona B is a Spanish football team based in Barcelona, in the autonomous community of Catalonia.

Narcís Martí Filosia is a Spanish retired footballer who played as an attacking midfielder.

Juan Carlos Pérez López, known as Juan Carlos, was a Spanish footballer who played as a midfielder.

Jordi Roura Solà is a Spanish former footballer who played as a midfielder.

Sebastián Herrera Zamora is a Spanish former footballer who played as a central defender.

Carles Aleñá Castillo is a Spanish professional footballer who plays as a central midfielder for Getafe.

Albert Capellas Herms, is a Spanish football manager. He is currently the assistant director of youth football of Barcelona.