Carlo Ademollo (9 October 1824, in Florence – 15 July 1911, in Florence) was an Italian painter, best known for his scenes from the Risorgimento.

He was the grandson of the Milanese painter, Luigi Ademollo. In 1838, he enrolled at the Accademia di Belle Arti di Firenze, where he studied with Giuseppe Bezzuoli. [1] He had his first exhibition in 1848, with scenes of contemporary customs. He came from a liberal family, many of whose members enlisted as volunteers in the First War of Italian Independence but, as a painter, he remained strictly traditional. He briefly took part in the "Scuola di Staggia  [ it ]" (a group of landscape painters inspired by the Barbizon school) and frequented the Caffè Michelangiolo, but never joined the Macchiaioli. [1]

Later, he moved away from landscapes and genre scenes to depict episodes from the Risorgimento; including the breach of the Porta Pia during the Capture of Rome, the "Handshake of Teano", between Garibaldi and King Victor Emmanuel, and the execution of Felice Orsini. [1]

During the Second Italian War of Independence, he followed the army at his own expense and maintained an extensive correspondence with those involved, requesting details to help him create his paintings. He also participated in the Third Italian War of Independence, receiving the rank of Adjutant to the commander of the National Guard of Florence. Later, the King designated him the official painter of the Italian Army. [1] In 1869, he was named a corresponding professor at his alma mater, the Accademia.

Many of his letters and other personal items were donated to the "Istituto per la storia del Risorgimento italiano  [ it ]" by his nephew Umberto. The Instituto also possesses one of Ademollo's last works; a posthumous portrait of Adelaide Cairoli  [ it ]. 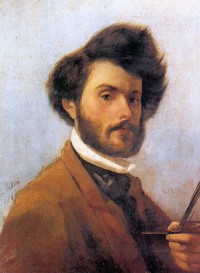 Enrico Gamba was an Italian painter of genre scenes, period pieces and a few portraits.

Silvestro Lega was an Italian realist painter. He was one of the leading artists of the Macchiaioli and was also involved with the Mazzini movement.

Vito D'Ancona was an Italian painter of the Macchiaioli group.

Pio Joris was an Italian painter. 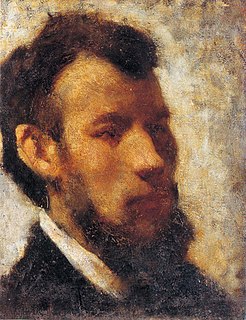 Francesco Filippini was an Italian painter from Lombardy. He was much influenced by Tranquillo Cremona.

Luigi Ademollo was an Italian painter.

Matteo Tassi was an Italian painter, best known for his decorative frescoes and restorations.

András or Andrea Markó (1824–1895) was a Hungarian-Italian painter, mainly of landscapes. Like his brother, the more famous landscape painter Károly Markó the Younger, he was active in Florence, Italy. 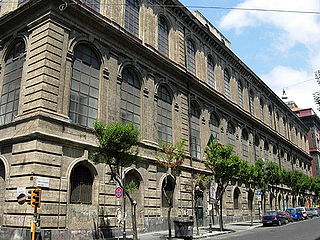 The Accademia di Belle Arti di Napoli is a university-level art school in Naples. In the past it has been known as the Reale Istituto di Belle Arti and the Reale Accademia di Belle Arti. Founded by King Charles VII of Naples in 1752, it is one of the oldest art schools in Italy, and offers various levels of study up to and including the equivalent of an Italian laurea. It is located one block south of the church of Santa Maria di Costantinopoli, on the via of the latter church's name.

Michele Cammarano was an Italian painter who was best known for his battle scenes, although he worked with a wide variety of subjects.

Carlo Ernesto Liverati was an Italian painter, mainly of genre and portraits. He was born in Austria to an Italian family, but trained in England and Florence. 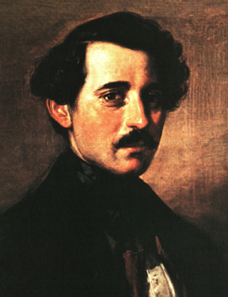 Carlo Bossoli was a Swiss-born Italian painter and lithographer, who spent his early career in Russia. He is best known for historical scenes from the Risorgimento.

Giulio Carmignani was an Italian landscape painter and litterateur.

Luigi Marchesi was an Italian painter who specialized in architectural and interior scenes.

Giuseppe De Sanctis was an Italian painter, primarily of portraits and cityscapes.

Antonio Simonazzi was an Italian painter, active mainly in his native Modena.

Ennio Morlotti was an Italian painter of the Corrente de Vita movement started in Milan as a counterpoint to nationalistic Futurism and the Novecento Italiano movements. His figures show an affinity to the geometry of Cezanne and Matisse, but later works introduce elements of abstraction.

Antonio Puccinelli was an Italian painter; one of the group known as the "Macchiaioli".