Of German and Swiss descent, he played leading roles on stage and in films in Argentina. He went to Hollywood in the 1950s and was typically cast as a European womanizer. His Hollywood films include Flame and the Flesh (1954) with Lana Turner and Pier Angeli, Valley of the Kings (1954), with Robert Taylor and Eleanor Parker, Magic Fire (1955) in which he played Franz Liszt, opposite Yvonne De Carlo, Rita Gam, and Valentina Cortese.

He moved to Europe and appeared in a large number of German films. He was chiefly known to English speakers for his appearance as Carlos Varela in the 1963 ITC Entertainment series The Sentimental Agent . In the late 1960s, Thompson left acting to become a writer and TV producer.

His first success on the European book market was The Assassination of Winston Churchill (1969), a refutation of allegations by David Irving (Accident. The Death of General Sikorski, 1967) and the German playwright Rolf Hochhuth (Soldiers, premiered in the UK in 1968, London) that war time premier Winston Churchill had a part in the death of Polish General Władysław Sikorski, who perished in an air plane crash at Gibraltar on July 4, 1943, allegedly due to sabotage.

Thompson married German-born actress Lilli Palmer shortly after her divorce from Rex Harrison in 1957. They remained married until her death in 1986.

Before his marriage to Palmer, Thompson had a relationship with Mexican actress María Félix. They met in Argentina in 1952 during the filming of Luis César Amadori's La pasión desnuda . The relationship was reportedly serious to the point that they became engaged to be married, and Félix even called for her son Enrique Álvarez Félix to meet his potential stepfather. However, during filming, Félix received a call from director Emilio Fernández to offer her the leading role in The Rapture , which Félix accepted, telling Thompson that after filming of La pasión desnuda ended she would return to Mexico to promote the film and announce their future marriage. However, once in Mexico, Felix canceled the wedding days before it would take place, stating that she concluded that the only thing that united her to Thompson was a mere physical attraction and not true love, before marrying The Rapture's leading man Jorge Negrete. [1] [2]

Four years after his wife's death, Thompson committed suicide in Buenos Aires by a gunshot to his head. [3]

María de los Ángeles Félix Güereña was a Mexican actress and singer. Along with Pedro Armendáriz and Dolores del Río, she was one of the most successful figures of Latin American cinema in the 1940s and 1950s. Considered one of the most beautiful actresses of the Golden Age of Mexican cinema, her taste for the finesse and strong personality garnered her the title of diva early in her career. She was known as La Doña, a name derived from her character in Doña Bárbara (1943), and María Bonita, thanks to the anthem composed exclusively for her as a wedding gift by Félix's second husband, Agustín Lara. Her acting career consists of 47 films made in Mexico, Spain, France, Italy and Argentina.

Jaime Fernández Reyes is a Mexican actor. Over his career, he won 3 Silver Ariel awards — the Mexican equivalent of the Oscar — including one for what is arguably his best-known role, playing Friday, the protagonist's associate in Luis Buñuel's Robinson Crusoe. He appeared in over 200 films and served as the general secretary of the National Association of Actors (ANDA) for 11 years. His father is actor/director Emilio Fernández. 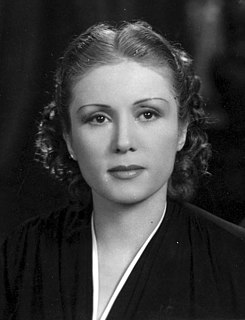 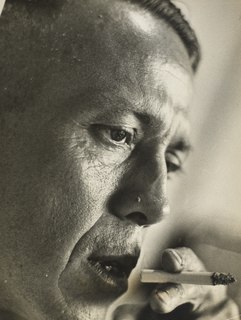 Alberto Manuel Rodríguez-Gallego González de Mendoza was an Argentine film actor who appeared in some 114 films between 1930 and 2005, spanning eight decades.

La pasión desnuda is a 1953 Argentine film. It was written and directed by Luis César Amadori and starred María Félix, Carlos Thompson and Eduardo Cuitiño. 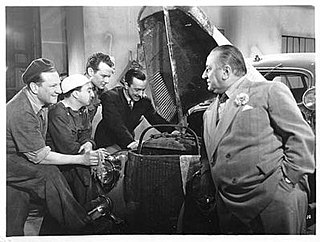 Mario Baroffio (1905–1962) was an Argentine film actor of the classic era of Argentine cinema.

Héctor Calcaño was an Argentine film actor. He appeared in nearly 70 films between 1933 and 1968. 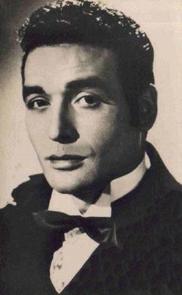 Modesto Llosas Rosell known professionally as Jorge Mistral was a Spanish film actor. During the 1940s, he became a star in films produced by CIFESA. In the 1950s, he lived and worked in México and appeared in Luis Buñuel's Abismos de pasión in 1954. Later, in the 1960s, he directed three films. 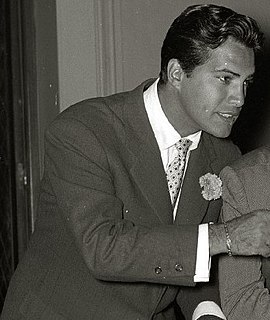 María Victoria Gutiérrez Cervantes is a Mexican actress, singer, and comedian. She is best known for starring in the Telesistema Mexicano sitcom La criada bien criada and its 1972 spin-off film of the same name as maid Inocencia. 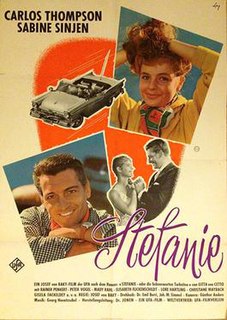 Stefanie is a 1958 West German comedy film directed by Josef von Báky and starring Carlos Thompson, Sabine Sinjen and Rainer Penkert. It was followed by a 1960 sequel Stefanie in Rio.

Stefanie in Rio is a 1960 West German romantic comedy film directed by Curtis Bernhardt and starring Carlos Thompson, Sabine Sinjen and Andréa Parisy. It is a sequel to the 1958 film Stefanie.

Raúl del Valle was a Chilean film and theatre actor who performed for most of his career in Argentina.

TNT Sports Argentina is a subscription television channel dedicated to the broadcast of the sport of that country, along with ESPN Premium, which began broadcasting on Friday, August 25, 2017, from 6:00 p.m., after the alliance of Turner and Fox by the television rights of the Argentine First Division of Argentine soccer, being replacement of the governmental program Fútbol para Todos.