Carlsminde is a Baroque-style mansion located at Søllerødvej 30 in Søllerød, Rudersdal Municipality, some 20 kilometres north of central Copenhagen, Denmark. The building was listed on the Danish registry of protected buildings and places in 1918. The political party Venstre has been based in the building since 1971.

Carlsminde originates in an old tenant farm. Courty[ clarification needed ] physician and kancelliråd Johan Peter Homuth constructed a small country house at the land in 1751 and later expanded the estate with more land twice. The current building was built for a later owner, Peter Wasserfalls, a grocer and manufacturer, probably a few years prior to his death in 1782. Wasserfall left the estate to his son who also purchased another nearby property. Carlsminde then changed hands many times. One of the later owners was prime minister Christian Ditlev Frederik Reventlow who wanted a summer residence close to Copenhagen. [1]

The property was given the Carlsminde by Bolette Rudolphine Berg (1761–1836) in memory of her late husband Carl Berg. She also completed a 3.5 hectare park in English landscape style.

Carlsminde was owned by hunting master Rasmus Petersen from 1855 to 1867. During this period Carlsminde changed status from tenant farm to ownership. The house was then owned by composer Emil Hartmann. A later owner, Valet de chambre G. F. Bentzen, changed the facade in 1894.

Carlsminde was acquired by Isak Glückstadt in 1903. He expanded the estate from 10 to 25 hectares. The park was expanded by the landscape architect Erstad Jørgensen . It was centred on a lake with pikes and tenches and was also home to two Indian elephants. In 1907 Glückstadt commissioned Carl Brummer to build a Norwegian-style cabin. It was moved to Rungsted in 1910 and to Holte in the early 1940s.

Dethlef Jürgensen owned Carlsminde from 1913 to 1947. He sold off most of the land, creating the streets Carlsmindevej and Carlsmindeparken. Jürgensen was a central figure at Klampenborg Racecourses. In 1913 he constructed the side wing with stables for nine horses.

A later owner, Erik Møller, a CEO, established a riding ground to the rear of the stables in the 1950s. Venstre acquired the property in 1970 and has been based there since 1971.

The main building fronts a large courtyard located on the southside of Søllerødsvej. A detached side wing marks the east side of the courtyard.

The main building is 11 bays long and consists of a high cellar, bel étage and a hipped Mansard roof with blue-glazed tiles. The three-bay median risalit was adapted in the 1893. The two windows that flanked the main entrance were replaced by niches with sandstone vases. The Rococo-style Cartouche above the main entrance and the Neclassical attica was also added at this point. The combination of decorative elements from different architectural styles is a characteristic feature of the Historicist style that dominated Danish architecture in the 1890s.

The side wing contains two small apartments flanking a stable with room for nine horses. The northern gable of the side wing is integrated in the wall that partly surrounds the property.

The secretariat of Venstre is based in the building. The garden is used for events on Constitution Day (5 June).

Övedskloster Manor is a manor in Sjöbo Municipality, Scania, in southern Sweden.

Søllerød is a suburban district of Rudersdal Municipality in the northern outskirts of Copenhagen, Denmark. The original village, one of the oldest in the area, is perched on Søllerød Hill on the south side of Søllerød Lake. It merged with the neighbouring village of Øverød to the north and the modern district of Holte to the southwest in the middle of the 20th century and now forms part of the Greater Copenhagen area. 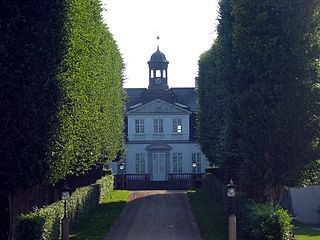 Sorgenfri Palace is a royal residence of the Danish monarch, located in Lyngby-Taarbæk Municipality, on the east side of Lyngby Kongevej, in the northern suburbs of Copenhagen. The surrounding neighbourhood is called Sorgenfri after it. Only the cellar and foundations survive of the first Sorgenfri House, which was built in 1705 to design by François Dieussart. The current house was built in 1756 by Lauritz de Thurah and later adapted and extended by Peter Meyn in the 1790s. Lauritz de Thurah has also designed buildings which flank the driveway closer to the road.

The Prince's Mansion is a palatial Rococo-style mansion located at Frederiksholms Kanal in central Copenhagen, Denmark. It used to serve as the official residence of the Crown Prince of Denmark but now houses the National Museum of Denmark.

Rosenfeldt Manor is a manor house and estate located just west of Vordingborg, Vordingborg Municipality, some 90 km south of Copenhagen, Denmark. One of 12 new manors created when Vordingborg Cacalry District was dissolved in 1774, its first owner was Reinhard Iselin. The current main building was constructed for Oscar O'Neill Oxholm in 1870 to a design by Henrik Steffens Sibbern.

Orupgaard is a manor house located 6 kilometres (3.7 mi) east of Nykøbing and 3 kilometres (1.9 mi) north of Idestrup on the Danish island of Falster. With a history dating from the 13th century, Orupgaard today manages over 1,200 hectares of farmland and forest as well as an equestrian facility at Brændte Ege Avlsgaard. 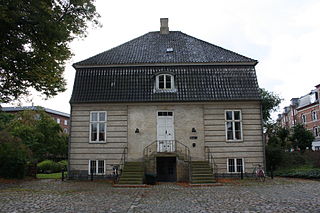 Rolighed is a historic property in the Frederiksberg district of Copenhagen, Denmark. Built in about 1770, it is one of few surviving examples of the summer retreats which dominated Frederiksberg from the late 18th century and until the area was absorbed by the expanding city of Copenhagen in the second half of the 19th century. It is now owned by University of Copenhagen. 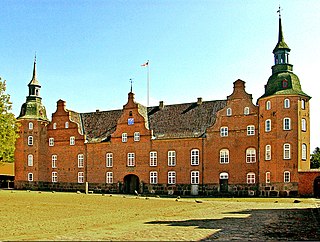 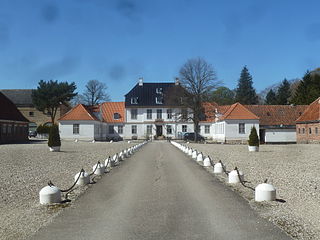 Edelgave is a manor house situated just southwest of Smørumnedre, Egedal Municipality, 20 km northwest of central Copenhagen, Denmark. The current main building was designed by Andreas Kirkerup and is listed.

Frederiksholms Kanal 16–18 are two almost identical listed properties overlooking Frederiksholm Canal in central Copenhagen, Denmark. The Victorian Home, a 15-room, late 19th-century bourgeois home now operated as a historic house museum by the National Museum of Denmark, is located on the second floor of No. 18. The Attorney general (Rigsadvokaten) is based at No. 16. Both buildings were listed on the Danish registry of protected buildings and places by the Danish Heritage Agency on 6 April 1969.

Gjedsergård is a manor house on the island of Falster in southeastern Denmark. It has been owned by members of the Tesdorpf family since 1847. The main building and the parallel building Kavalerfløjen are from 1768 and were listed on the Danish registry of protected buildings and places by the Danish Heritage Agency on 1 December 1959

Gammel Kirstineberg is a manor house located on the island of Falster in southeastern Denmark. The main building is from 1773 and was listed on the Danish registry of protected buildings and places by the Danish Heritage Agency on 5 March 1945.

Nordfeld is a manor house on the island of Møn in southeastern Denmark. The estate was created in 1774 but the current, Neo-Gothica main building is from 1876.

Lundbygård is a manor house and estate located in Lundby, Vordingborg Municipality, in the southeastern part of Denmark. It has been owned by the Collet family since 1827. Its current owner is former Danish Defence Minister Bernt Johan Collet. The Neoclassical main building from 1815 was listed on the Danish registry of protected buildings and places by the Danish Heritage Agency on 6 July 1918.

Hagestedgaard is a manor house and estate located at the village of Hagested, near Holbæk, Holbæk Municipality, some 60 kilometres west of Copenhagen, Denmark. The estate traces its history back to the 13th century but the current asymmetrical complex of single-storey, white-washed buildings surrounding a central courtyard was constructed for Hans Didrik Brinck-Seidelin in 1747 with the exception of the remains of a tower built by Johan Friis in 1555. The estate has been owned by members of the Castenskiold family since 1769. 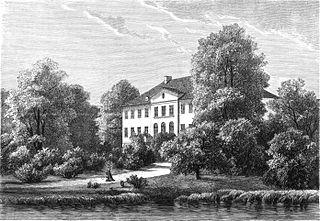 Aggersvold is a manor house and estate located just north of Jyderup, Holbæk Municipality, some 80 kilometres west of Copenhagen, Denmark. The current main building was built in 1833-35 for major-general Harald Rothe (1781-1848). It was listed on the Danish registry of protected buildings and places in 1944.

Lindholm is a manor house and estate located in Lejre Municipality, between Roskilde and Yølløse, some 30 kilometres west of Copenhagen, Denmark. It has been owned by members of the von Plassen family since 1728 and is now part of the Londholm-Selsø estate.. 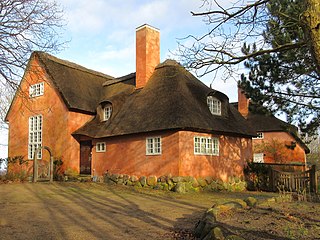 Rågegården is an Arts & Crafts inspired country house from 1915 situated on the eastern outskirts of Rågeleje, Gribskov Municipality, some fifty kilometres northwest of Copenhagen, Denmark. The house is perched on a small wooded hill, overlooking the Kattegat coast. It was listed on the Danish registry of protected buildings and places in 1989. The scope of the heritage listing was expanded in 2012.

Møllmanns Landsted, literally Møllmann's Country House, is a mid 18th-century Rococo-style country house now hidden from the street by a row of younger buildings at Allégade 6 in the Frederiksberg district of Copenhagen, Denmark. The building was from 1821 to 1887 home to Det Wærnske Institut, a home and educational facility for middle-class girls in difficult circumstances. The old country house and the building fronting the street are both listed in the Danish registry of protected buildings and places.

Studiestræde 10 is a Neoclassical property in the Latin Quarter of Copenhagen, Denmark. The building was listed in the Danish registry of protected buildings and places in 1964.