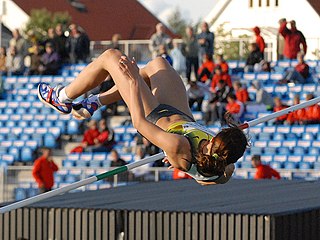 Jean Evelyn Roberts is a former Australian Olympic athlete who competed in the shot put and discus throw events.

At the age of 16, Wright was selected to compete in the 1962 British Empire and Commonwealth Games in Perth where she placed sixth. Through her career, she won six Australian Championships [2] and had a personal best of 1.74 metres, set in 1962.

In 1972, Wright married Olympic sprinter Greg Lewis. Their daughter Tamsyn is a three-time Olympian, specialising in the 800 metres, who has won three Commonwealth Games Relay Gold Medals [3] and a World Indoor 800m Gold Medal in athletics. 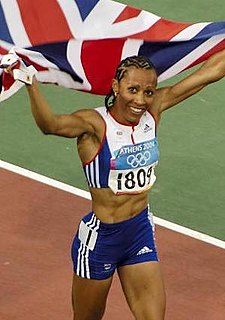 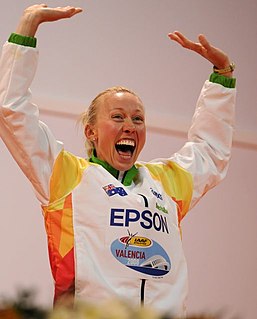 Tamsyn Carolyn Manou is an Australian athlete and middle-distance runner, who has won a total of eighteen Australian Championships at 400 metres, 800 metres and 400m hurdles.

David William Power was an Australian athlete who competed mainly in the 10,000 metres during his career. 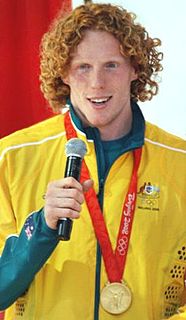 Steven "Steve" Leslie Hooker OAM is an Australian former pole vaulter and Olympic gold medalist. His personal best, achieved in 2008, is 6.06 m making him the third-highest pole vaulter in history, behind Sergey Bubka and Renaud Lavillenie.

Sally Pearson, OAM is an Australian athlete. She is the 2011 and 2017 World champion and 2012 Olympic champion in the 100 metres hurdles. She also won a silver medal in the 100 m hurdles at the 2008 Summer Olympics and the 2013 World Championships.

Dianne Burge, is a former Australian sprinter who competed in two Olympic Games and won three gold medals at the Commonwealth Games. She was awarded the title South Australian 'Athlete of the Century' by Athletics South Australia.

Gregory "Greg" Lewis is a former Australian Olympic athlete who competed in the 100 metres and 200 metres.

Tania Van Heer is an Australian sprinter who won two gold medals at the 1998 Commonwealth Games in Kuala Lumpur. 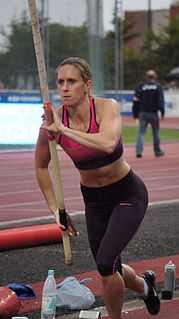 Kathryn Mitchell is an Australian track and field athlete who competes in the javelin throw. She has represented her country at two Olympic Games, finishing ninth in 2012 and sixth in 2016. She won gold at the 2018 Commonwealth Games with a throw of 68.92 m, a Commonwealth Games, Australian and Oceanian record. It also ranks her seventh on the world all-time list.

Coburg Harriers is an athletics club located in Coburg, in the inner norther suburbs of Melbourne, Australia. The club is based at the Harold Stevens Athletics Track.

Madeleine Pape is an Australian middle distance runner. She set her personal best time of 1:59.92, by winning the women's 800 metres at the 2008 Sydney Athletics Grand Prix in Sydney, New South Wales. She also won a gold medal in the same distance at the 2009 Summer Universiade in Belgrade, Serbia, finishing her time at 2:01.91.

Donna Tyberek-MacFarlane is an Australian middle distance and steeplechase runner. She set both an Australian record and her personal best time of 9:18.35, by finishing third in the women's 3000 metres steeplechase at the 2008 IAAF Golden League Meeting in Oslo, Norway.

Lisa Corrigan is an Australian middle distance runner and the current Australian record holder over the one mile where she set a time of 4.22.6 in 2007. She set her personal best time of 4:05.25, by winning the women's 1500 metres at the Telstra Athletics Series in Sydney. She ran a personal best to beat Tamsyn Lewis over the 800m in 2007 in 2.01.5. She has represented Australia at the Oceania championships 1999, youth commonwealth games 2000, World youth championships 2001, Ekiden relays, Melbourne commonwealth Games 2006, world championships 2007 and Olympic Games 2008.