Carpow[ pronunciation? ] is a diffuse hamlet in Perth and Kinross, Scotland. It is situated immediately to the east of the confluence of the River Tay and River Earn, 2 km north east of Abernethy. [1]

Carpow is most notable for its archaeological remains. During Roman times the settlement was the site of a camp and fort, which was made of stone, signalling the intent to stay for an extended period. [3] [4] [5] An early medieval Picto-Scottish cross fragment once formed part the lintel of a well at Carpow House. [6] [7]

The Roman fort of Carpow was a Roman fortress situated at the confluence of the rivers Tay and Earn. [8] The fortress is known to have been occupied from the late second century AD until the early third century AD. The site of the fort has not been comprehensively excavated but it is believed to have served as a naval supply depot for Roman forces in the central lowlands. Its occupation also coincided with the campaigns of Septimius Severus in the area. [8] 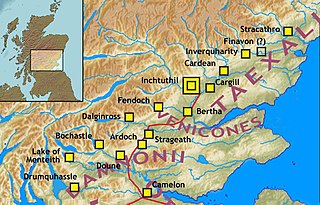 The Gask Ridge is the modern name given to an early series of fortifications, built by the Romans in Scotland, close to the Highland Line. Modern excavation and interpretation has been pioneered by the Roman Gask Project, with Birgitta Hoffmann and David Woolliscroft. The ridge fortifications: forts, fortlets and watchtowers were only in operation for a short number of years, probably a single digit number.

The Maeatae were a confederation of tribes who lived probably beyond the Antonine Wall in Roman Britain. 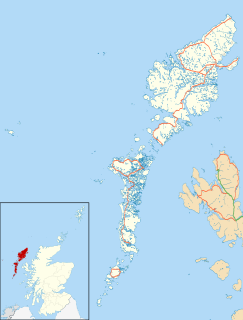 Rodel is a village on the south-eastern coast of Harris, an island in the Scottish Outer Hebrides. Rodel is situated in the parish of Harris. It was historically the capital of Harris, and the main port, before Tarbert took the title.

Breasclete is a village and community on the west side of the Isle of Lewis, in the Outer Hebrides, Scotland. Breasclete is within the parish of Uig, and is situated adjacent to the A858.

Logierait is a village and parish in Atholl, Scotland. It is situated at the confluence of the rivers Tay and Tummel, 0.5 kilometres (0.31 mi) west of the A9 road in Perth and Kinross.

Arbirlot is a village in a rural parish of the same name in Angus, Scotland. The current name is usually presumed to be a contraction of Aberelliot or Aber-Eliot - both meaning the mouth of the Elliot. It is situated west of Arbroath. The main village settlement is on the Elliot Water, 2.5 miles from Arbroath. There is a Church of Scotland church and a primary school. The school lies 1 mile further west in the approximate geographic centre of the parish.

Bertha was a Roman fortress north of the site of modern Perth, Scotland, at the confluence of the rivers Almond and Tay. It is half a mile east of the modern farm of "Berthapark" and is a scheduled ancient monument.

Invermay is a diffuse settlement in Perth and Kinross, Scotland. It is situated approximately 2 km southeast of Forteviot on the Water of May, some 8 km southwest of Perth.

Leswalt is a village and civil parish in Dumfries and Galloway, south-west Scotland. It lies between Portpatrick and Stranraer in the Rhins of Galloway, part of the traditional county of Wigtownshire. The parish covers around 8 square miles (21 km2).

Inchyra is a hamlet in the Carse of Gowrie in Scotland. It lies on the northern bank of the River Tay near Perth and is notable particularly for a number of archaeological finds made in the immediate vicinity. 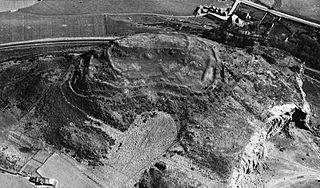 The fort of Clatchard Craig was located on a hill of the same name by the Tay. A human presence on the site has been identified from the neolithic period onward and the fort itself was occupied from the sixth century AD until at least the eighth century. It stood close to several places which were centres of secular and religious power during the early Middle Ages including Abernethy, Forteviot, Scone and Moncreiffe. As such it seems to have been an important stronghold of the Picts. 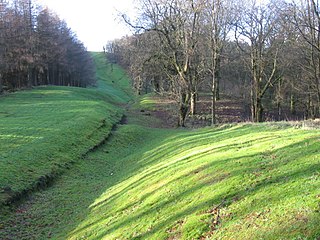 The architecture of Scotland in the Roman era includes all building within the modern borders of Scotland, from the arrival of the Romans in northern Britain in the first century BCE, until their departure in the fifth century. Although Ptolemy indicated that there were 19 "towns" in Caledonia, north of the Roman province of Britannia, no clear evidence of urban settlements has been found and these were probably hillforts. There is evidence of over 1,000 such forts, most below the Clyde-Forth line, but the majority seem to have been abandoned in the Roman period. There is also evidence of distinctive stone wheelhouses and small underground souterrains.

The Roman Fort of Carpow was situated at the confluence of the rivers Tay and Earn in what is now Scotland.

Dundurn is the site of a Pictish hillfort in what is now Strathearn in Perth and Kinross, Scotland. 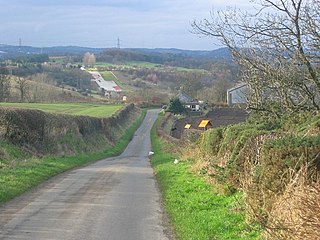 Inveravon is sited on the east side of the River Avon in Scotland. It was long considered to be the likely site for a Roman Fort on the Antonine Wall in Scotland. The fort is one of the most dubious on the wall although some excavation and geophysics has been done. Near Inveravon Tower, the bare traces of a fort were found but there is nothing that an unskilled visitor could identify. Several excavations have unearthed the site's foundations as well as a section of the Military Way. Cobbled surfaces and some stone walls were found. Also ‘expansions’ were discovered, perhaps used as signal or beacon towers.

Dunearn is a hill fort located 15 kilometres (9.3 mi) south south east of Nairn in Highland, Scotland. It is situated on a steep-sided hill called Doune rising to approximately 266 metres (873 ft) above ordnance datum just south of Dulsie Bridge in the parish of Ardclach.