Carrickmines (Irish : Carraig Mhaighin, meaning 'Plateau of rock') is an outer suburb of Dublin in Dún Laoghaire–Rathdown, Ireland. The area, still semi-rural, was historically on the border of English control and featured a defensive construction, Carrickmines Castle, which became the subject of national controversy during the building of a late stage of Dublin's M50 orbital motorway.

Previously a rural area, and today a semi-rural suburban region, Carrickmines is now divided northeast–southwest by the M50 motorway, with, to the northeast, more established residential areas, and to the southwest, including along Glenamuck Road, new retail parks, office buildings, housing schemes and apartments.[ citation needed ]

Carrickmines developed as a settlement in the more than 6 km long valley of the same name, which contains the modest Carrickmines River and its tributaries. The Ballyogan, Glenamuck and Golf Streams all merge in the vicinity. Downstream at Brennanstown, the river merges with St. Bride's Stream, from Foxrock, to form the Loughlinstown River, which in turn meets the Bride's Glen Stream to form the Shanganagh River, which reaches the sea at Killiney Strand. [1]

During the construction of the M50 motorway, Carrickmines gained national notoriety when anti-roads protesters calling themselves the Carrickminders set up camp in the area and delayed the completion of the M50 for two years with legal challenges being taken by Vincent Salafia. The objectors claimed that the underground remains of Carrickmines Castle, an Anglo-Norman fort built in the 12th century on the edge of the Pale, was of national importance. Today, much of the uncovered remains are preserved in tunnels and other structures scattered around the interchange. Dún Laoghaire–Rathdown County Council claimed the action greatly increased the cost of the project, which was eventually completed in August 2005.

Junction 15 of the M50 lies at the centre of Carrickmines. The retail park and developments on Glenamuck Road have converted the previously semi-rural area into a mix of suburban complexes, with shops, offices, apartment blocks and housing estates, and a patchwork of remaining farmland.[ citation needed ]

The retail park at Carrickmines, The Park Carrickmines, contains a mixture of retail and office space. It was sold for €100m in 2006, [3] and reportedly garnered the highest retail park rents in Ireland in 2014. [4] In 2015 it was reported as the best performing Irish retail park by The Sunday Times . [5]

Carrickmines Luas stop on the Green Line lies in the northeast of the settlement and has a park and ride. It is also served by regular Go-Ahead Ireland 63 and 63A services which pass through Carrickmines on their route from Dún Laoghaire to Kilternan. [7]

Carrickmines is mentioned in James Joyce's novel A Portrait of the Artist as a Young Man , in which it is described as an area dominated by fields. It also appears in the 1961 film Johnny Nobody.[ citation needed ] 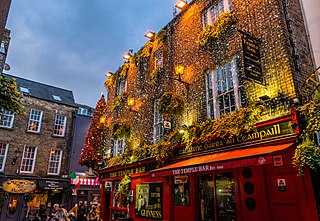 The Southside is the part of Dublin city that lies south of the River Liffey. It is an informal but commonly used term. In comparison to the city's Northside, it has historically been regarded as wealthier and more privileged, with several notable exceptions. 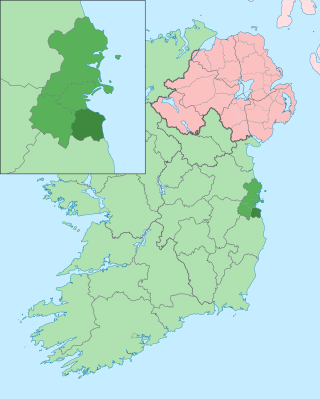 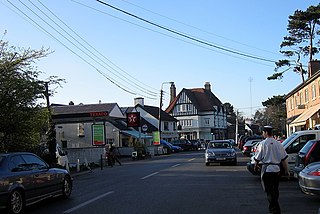 Foxrock is an affluent suburb of Dublin, Ireland. It is within the county of Dún Laoghaire–Rathdown, in the postal district of Dublin 18 and in the Roman Catholic parish of Foxrock. 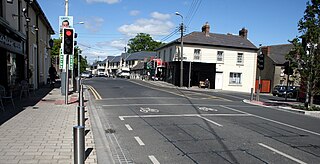 Cabinteely is a suburb of Dublin's southside. It is in Dún Laoghaire–Rathdown, County Dublin, Ireland.

Carrickmines Castle is an archaeological site in Carrickmines, County Dublin, in eastern Ireland. The castle was built in the Middle Ages to protect the English-ruled Pale around Dublin. The mostly subsurface ruins lay in the path of the M50 Motorway, completed in 2005. Sections of the medieval walls and some sections of the castle's defensive structures were preserved within or under M50 roundabouts. 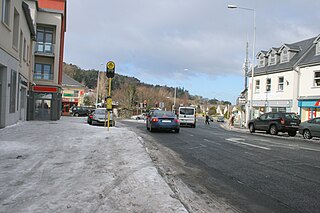 Stepaside is a village on the outskirts of Dublin located on its southside, located in Dún Laoghaire–Rathdown, Ireland. The area is situated 4 kilometres (2.5 mi) south of Dundrum.

Leopardstown is a suburb of Dublin in Dún Laoghaire–Rathdown, within the traditional County Dublin, Ireland. Located at the foot of the Dublin Mountains, it is a residential suburb with institutional lands and a large racecourse. It is divided by the M50 motorway, and adjoins Sandyford, Stepaside, Ballyogan, Foxrock and Stillorgan. 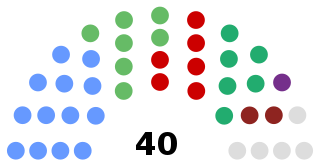 Dún Laoghaire–Rathdown County Council is the authority responsible for local government in the county of Dún Laoghaire–Rathdown, Ireland. It is one of three local authorities that succeeded the former Dublin County Council on its abolition on 1 January 1994 and one of four councils in the old County Dublin. As a county council, it is governed by the Local Government Act 2001. The council is responsible for housing and community, roads and transportation, urban planning and development, amenity and culture, and environment. The council has 40 elected members. Elections are held every five years and are by single transferable vote. The head of the council has the title of Cathaoirleach (Chairperson). The county administration is headed by a Chief Executive, Frank Curran. The county town is Dún Laoghaire. It serves a population of approximately 206,260. 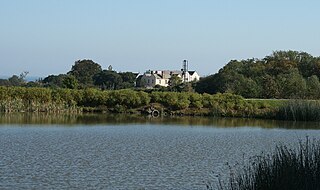 Loughlinstown is a southern Dublin suburb, located in Dún Laoghaire–Rathdown, on the N11 national road. 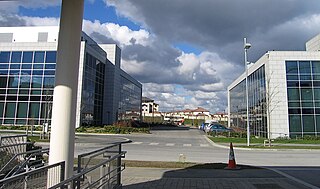 Cherrywood is a developing suburb of Dublin, Ireland, bordering Cabinteely, Loughlinstown and Rathmichael. It is located to the southeast of the city, in Dún Laoghaire–Rathdown. The development commenced on a greenfield site in 1998 and primarily comprises Cherrywood Business Park and some residential development, with retail development and a hotel also planned.

Kilternan, also known as Kiltiernan, is a village in Dún Laoghaire–Rathdown, in the foothills of the Wicklow Mountains south of Dublin, Ireland, near the border with County Wicklow.

The R116 road is a regional road in Ireland which runs east-west from the N11 at Loughlinstown to the R115 in Ballyboden. It runs through the South of County Dublin for its entire length. 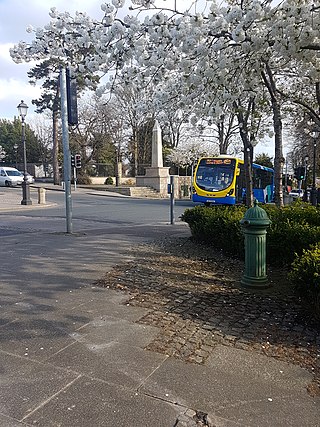 Ballybrack is a residential suburb of Dublin on its Southside, located in Dún Laoghaire–Rathdown, Ireland. It is south of Killiney, northeast of Loughlinstown, east of Cabinteely and north of Shankill. 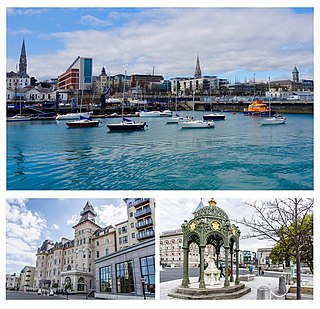 Dún Laoghaire is a suburban coastal town in Dublin in Ireland. It is the administrative centre of Dún Laoghaire–Rathdown.

Barnaslingan is a 238 metres high hill in County Dublin, Ireland. It is most noted for the geological feature known as The Scalp that lies to the west of the summit. Samuel Lewis, in A Topographical Dictionary of Ireland (1837), described it thus: “A deep natural chasm in the mountain, forming a defile with lofty and shelving ramparts on each side, from which large detached masses of granite many tons of weight have fallen, on each side large masses of detached rock are heaped together in wild confusion, apparently arrested in their descent, and threatening at every moment to crush the traveller by their fall”. 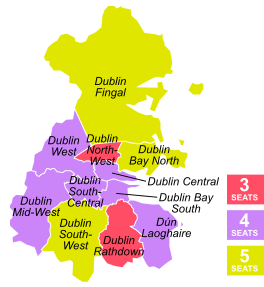 Dublin Rathdown is a parliamentary constituency represented in Dáil Éireann, the lower house of the Irish parliament or Oireachtas, since the 2016 general election. The constituency elects three deputies on the system of proportional representation by means of the single transferable vote (PR-STV).

Ballyogan Wood is a stop on the Luas light-rail tram system in Dún Laoghaire - Rathdown, south of Dublin, Ireland. It opened in 2010 as a stop on the extension of the Green Line south from Sandyford to Brides Glen. The stop provides access to the nearby residential area of Ballyogan. 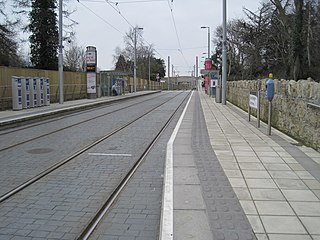 Carrickmines is a stop on the Luas light rail tram system in Dún Laoghaire - Rathdown, south of Dublin, Ireland which serves the nearby village of Carrickmines. It opened in 2010 and was built on the site of a disused heavy rail station of the same name.

Wikimedia Commons has media related to Carrickmines .
This page is based on this Wikipedia article
Text is available under the CC BY-SA 4.0 license; additional terms may apply.
Images, videos and audio are available under their respective licenses.