Carrie Matilda Derick (January 14, 1862 – November 10, 1941) [2] was a Canadian botanist and geneticist, the first female professor in a Canadian university, and the founder of McGill University's Genetics Department. [3] [4]

In 1889, Derick pursued a B.A. from McGill University, and graduated in 1890, at the top of her class in natural science with first-class honours, the highest GPA (94%) that year, and received the Logan Gold Medal. [3] [5] [6] [2] [7] [8] Her graduating class included two other notable Canadian women: Elizabeth Binmore and Maude Abbott. She began teaching at the Trafalgar Institute for Girls in 1890, while also working part-time as McGill's first female botany demonstrator. [3] [6] [2]

In 1891, Derick began her master's program at McGill under David Penhallow and received her M.A. in botany within four years (1896), while holding two simultaneous jobs. [3] [2] [1] She then attended the University of Bonn, Germany, in 1901 and completed the research required for a Ph.D. but was not awarded an official doctorate since the University of Bonn did not give women Ph.D. degrees at the time. [3] [6] [2] [9]

Derick also studied at Harvard University for three summers, the Royal College of Science, London in 1898, and the Marine Biological Laboratory in Woods Hole, Massachusetts for seven summers. [6] [2] [7]

Following her PhD research, Derick then returned to McGill University. [3] Given her previous seven years of teaching, researching, administration work and publishing (without pay) at McGill University, Derick wrote directly to Principal Peterson and was promoted to the position of assistant professor at one-third the salary of her male counterparts in 1905. [3] [2]

In 1909, when Penhallow (Derick's former Master's supervisor, then chair for McGill University's Botany Department) fell ill, Derick assumed his role as chair. [3] Penhallow passed away in 1910. [3] Following Penhallow's death, Derick continued to run the department for three years. [3] [5] [2] In 1912, McGill University began a search for a new department chair and did not recruit Derick, despite her previous experience or the strong support she received. [6] [2]

Derick continued to persevere in her role, and returned to teaching and research after a new demonstrator was hired. [10] She later petitioned to have her title changed to professor of comparative morphology and genetics to be more representative of her expertise and research interests. [2]

Derick founded McGill University's Genetics department. [3] She created the Evolution and Genetics course (the first of its kind in Canada) and published a number of academic publications on botany. [3] [2] She was one of the few women to be listed in the American Men of Science (1910). [4] [6] [2]

Due to poor health, Derick retired in 1929. [3] [2] McGill University awarded Derick the honorary title of "professor emerita," making her the first female professor emeritus in Canada. [3] [2] [9]

Derick was a leader in early feminism: fighting for women's right to education, the vote, and work. [7] Derick also co-founded and was a lifelong member of the National Council of Women. [3] [5] Her co-founder was Maude Abbott: McGill's pioneer cardiologist and curator of the Medical Museum. [3]

Derick was a member of the Mu Iota Society, a group whose name was later changed to The Alumnae Society. [11] She was a fellow of the American Association for the Advancement of Science, vice president of the Natural History Society of Montreal, and a member of the Botanical Society of America, the American Genetics Association, the Montreal Philosophical Club, the Canadian Public Health Association, the Executive Committee of the National Council of Education, and the first woman on the Protestant Committee of Public Instruction, Quebec, from 1920 to 1937. [6] [2] [7]

Derick was also president of the Montreal Suffrage Association from 1913 to 1919. [3] She publicly supported birth control in Canada (which was then illegal from 1891 to 1969). [3] [2] In 1915, Derrick confronted then Quebec premier Sir Lomer Gouin regarding his views on the topic of birth control. [3] [6] Derick also supported other social causes, including the need for mandatory school attendance for children, and care for 'abnormal' children. [2]

In 1914, Derick supported Annie Langstaff, the first female law graduate from McGill University, in her unsuccessful bid to join Quebec's bar. [3] One of Derick's students, Faith Fyles, went on to become assistant botanist on the Central Experimental Farm in Ottawa.

A street (Rue Carrie-Derick) is named after her in Montreal's Southwest borough. An award has been created in her honour at McGill University, titled the Carrie M. Derick Award for Graduate Supervision and Teaching. [12]

Brenda Milner, is a British-Canadian neuropsychologist who has contributed extensively to the research literature on various topics in the field of clinical neuropsychology, sometimes referred to as "the founder of neuropsychology". As of 2010, Milner is a professor in the Department of Neurology and Neurosurgery at McGill University and a professor of Psychology at the Montreal Neurological Institute. As of 2005, she holds more than 20 degrees and continues to work in her nineties. Her current work explores the interaction between the brain's left and right hemispheres. Milner has been called the founder of neuropsychology, and has proven to be an essential key in its development. She received the Balzan Prize for Cognitive Neuroscience, in 2009, and the Kavli Prize in Neuroscience, together with John O'Keefe, and Marcus E. Raichle, in 2014. She turned 100 in July 2018 and at the time was still overseeing the work of researchers.

Charles Robert Scriver, is an eminent Canadian pediatrician and biochemical geneticist. Scriver made many important contributions to our knowledge of inborn errors of metabolism. He led in establishing a nationwide newborn metabolic screening program that is considered a landmark in applying the results of research to children's health across an entire nation.

Maude Elizabeth Seymour Abbott was a Canadian physician, among Canada's earliest female medical graduates, and an internationally known expert on congenital heart disease. She was one of the first women to obtain a BA from McGill University.

Bartha Maria Knoppers, is a Canadian lawyer and an expert on the ethical aspects of genetics, genomics and biotechnology.

Frank Clarke Fraser, was a Canadian medical geneticist. Spanning the fields of science and medicine, he was Canada's first medical geneticist, one of the creators of the discipline of medical genetics in North America, and laid the foundations in the field of Genetic Counselling, which has enhanced the lives of patients worldwide. Among his many accomplishments, Fraser pioneered work in the genetics of cleft palate and popularized the concept of multifactorial disease. Fraser is an iconic figure in Canadian medicine, as well as a biomedical pioneer, a fine teacher, and an outstanding scientist.

Charles Leonard Huskins was an English-born Canadian geneticist who specialized in the field of cytogenetics. He is also sometimes referred to as C. Leonard Huskins or C.L. Huskins.

AllieVibert Douglas,, who usually went by her middle name, was a Canadian astronomer and the first Canadian woman to become an astrophysicist.

Rima Rozen is a Canadian geneticist who is a professor at McGill University. Her current research focuses on genetic and nutritional deficiencies in folate metabolism and their impact on complex traits.

Elizabeth Binmore was an educator from Montreal, known for her career and her important personal firsts in education.

David Pearce Penhallow was a Canadian-American botanist, paleobotanist and educator.

David Rosenblatt, a Canadian Medical Geneticist, Paediatrician is a professor in the Departments of Human Genetics, Medicine, Pediatrics, and Biology at McGill University in Montreal, Quebec, where he was the Chairman of Department of Human Genetics from 2001-2013. He is known for his contributions to the field of inborn errors of folate and vitamin B12 metabolism.

Laurie N. Gottlieb is a Professor, School of Nursing, McGill University, Montreal, Quebec, Canada, where she holds the Flora Madeline Shaw Chair of Nursing. She is Editor-in-Chief of CJNR and was recently named Nurse-Scholar-in-Residence at the Jewish General Hospital, a McGill University teaching hospital.

Octavia Grace Ritchie England was a Canadian physician and suffragist. In 1891 she became the first woman to receive a medical degree in Québec.

Faith Fyles was the first botanical artist with the Canadian federal government, department of agriculture. Her work resulted in the expansion of the herbarium in Ottawa. 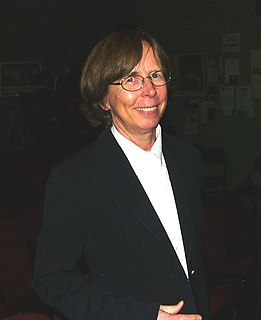 Kathleen "Kathy" Carol Fox is a Canadian parachutist, pilot, flight instructor, air traffic controller and business executive. After spending over 30 years in air traffic control, she was appointed chair of the Canadian Transportation Safety Board in 2014. In 2016, she was inducted into Canada's Aviation Hall of Fame.

Amélie Quesnel-Vallée is Associate Professor with joint appointment in the Departments of Sociology and of Epidemiology, Biostatistics and Occupational Health, as well as Canada Research Chair in Policies and Health Inequalities at McGill University in Montreal, Quebec, Canada.

Elena M. Bennett is an American ecosystem ecologist specializing in studying the interactions of ecosystem services on landscape. She is currently an associate professor and the Canada Research Chair in Sustainability Science at McGill University. She was inducted to the Royal Society of Canada’s College of New Scholars, Artists, and Scientists in 2017.

Anna Isobel McPherson (1901-1979) was a Canadian physicist and the first female professor in the Department of Physics at McGill University.