Jason Edward Lezak is an American former competition swimmer and a four-time Olympic gold medalist. He swam for Rose Bowl Aquatics. He graduated from Irvine High School in 1994, and then from the University of California, Santa Barbara in 1999.

Peter Mankoč is a Slovenian swimmer. He is one of the most successful short course European Championship swimmers in the history of the event. Mankoč is the former world record holder in the 100 meter individual medley.

Oussama "Ous" Mellouli is a Tunisian swimmer who competes in the freestyle and medley events. He is a three-time Olympic medalist, is an African record holder, and trains with the USC Trojans team based at the University of Southern California, where he studied as a computer science undergraduate and swam collegiately.

Carsten Embach is a German bobsledder who competed from the mid-1990s to the early 2000s. Competing in two Winter Olympics, he won two medals in the four-man event with a gold in 2002 and a bronze in 1994.

Diana MacManus is a female backstroke swimmer from the United States. As a member of the USA National team she competed at the 2001 Goodwill Games held in Brisbane, Australia where she won two silver medals. At the 2002 Short Course World Championships in Moscow, Russia where she brought home two more bronze medals.

Hannah Louise Miley is a Scottish competitive swimmer who specialises in the Individual Medley. Miley trained when she was younger at Inverurie Swimming Centre. She has represented Great Britain at three Olympic Games, reaching the final of the 400 metres individual medley on each occasion, finishing sixth in 2008, fifth in 2012 and fourth in 2016. Also in the 400 m individual medley, she is a former World short-course champion (2012), European champion (2010), and two-time European short-course champion representing Great Britain, and a two-time Commonwealth champion representing Scotland.

Fabian Friedrich is a German swimmer who won one silver and two gold medals at European Short Course Swimming Championships in 2003 and 2004. While winning the 4×50 m medley relay in 2003, his team set a new world record.

Dorothea Brandt is a German swimmer, who specialized in sprint freestyle and breaststroke events. She is a multiple-time German champion, a fourteen-time medalist at the European Short Course Swimming Championships, and a semi-finalist in the 50 m freestyle at the 2004 Summer Olympics in Athens. Brandt currently holds the short-course German record time of 23.74 seconds in the same discipline. 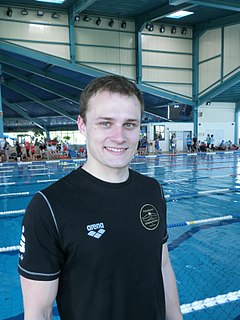