Caryophyllales ( /ˌkæri.oʊfɪˈleɪliːz/ KARR-ee-oh-fih-LAY-leez) [2] is a diverse and heterogeneous order of flowering plants that includes the cacti, carnations, amaranths, ice plants, beets, and many carnivorous plants. Many members are succulent, having fleshy stems or leaves. The betalain pigments are unique in plants of this order and occur in all its families with the exception of Caryophyllaceae and Molluginaceae. [3]

The members of Caryophyllales include about 6% of eudicot species. [4] This order is part of the core eudicots. [5] Currently, the Caryophyllales contains 37 families, 749 genera, and 11,620 species [6] The monophyly of the Caryophyllales has been supported by DNA sequences, cytochrome c sequence data and heritable characters such as anther wall development and vessel-elements with simple perforations. [7]

As with all taxa, the circumscription of Caryophyllales has changed within various classification systems. All systems recognize a core of families with centrospermous ovules and seeds. More recent treatments have expanded the Caryophyllales to include many carnivorous plants.

Systematists were undecided on whether Caryophyllales should be placed within the rosid complex or sister to the asterid clade. [7] The possible connection between sympetalous angiosperms and Caryophyllales was presaged by Bessey, Hutchinson, and others; as Lawrence relates: "The evidence is reasonably conclusive that the Primulaceae and the Caryophyllaceae have fundamentally the same type of gynecia, and as concluded by Douglas (1936)(and essentially Dickson, 1936) '...the vascular pattern and the presence of locules at the base of the ovary point to the fact that the present much reduced flower of the Primulaceae has descended from an ancestor which was characterized by a plurilocular ovary and axial placentation. This primitive flower might well be found in centrospermal stock as Wernham, Bessy, and Hutchinson have suggested.' " [8]

As circumscribed by the APG III system (2009), this order includes the same families as the APG II system (see below) plus the new families, Limeaceae, Lophiocarpaceae, Montiaceae, Talinaceae, and Anacampserotaceae. [1]

This represents a slight change from the APG system, of 1998

The Cronquist system (1981) also recognised the order, with this circumscription:

The difference with the order as recognized by APG lies in the first place in the concept of "order". The APG favours much larger orders and families, and the order Caryophyllales sensu APG should rather be compared to subclass Caryophyllidae sensu Cronquist.

A part of the difference lies with what families are recognized. The plants in the Stegnospermataceae and Barbeuiaceae were included in Cronquist's Phytolaccaceae. The Chenopodiaceae (still recognized by Cronquist) are included in Amaranthaceae by APG.

New to the order (sensu APG) are the Asteropeiaceae and Physenaceae, each containing a single genus, and two genera from Cronquist's order Nepenthales.

Earlier systems, such as the Wettstein system, last edition in 1935, and the Engler system, updated in 1964, had a similar order under the name Centrospermae.

The Portulacaceae are a family of flowering plants, comprising 115 species in a single genus Portulaca. Formerly some 20 genera with about 500 species, were placed there, but it is now restricted to encompass only one genus, the other genera being placed elsewhere. The family has been recognised by most taxonomists, and is also known as the purslane family. It has a cosmopolitan distribution, with the highest diversity in semiarid regions of the Southern Hemisphere in Africa, Australia, and South America, but with a few species also extending north into Arctic regions. The family is very similar to the Caryophyllaceae, differing in the calyx, which has only two sepals.

A system of plant taxonomy, the Thorne system of plant classification was devised by the American botanist Robert F. Thorne (1920–2015) in 1968, and he continued to issue revisions over many years (1968–2007).

The Achatocarpaceae are a family of woody flowering plants consisting of two genera and 11 known species, and has been recognized by most taxonomists. The family is found from the southwestern United States south to tropical and subtropical South America.

Centrospermae is a descriptive botanical name, published in 1878 by Eichler, meaning "with the seed in the center", referring to the free (central) placentation. It was used in the Engler system and the Wettstein system) for an order of flowering plants.

A 20th-century system of plant taxonomy, the Reveal system of plant classification was drawn up by the American botanist James Reveal (1941-2015). The system was published online in 1997 in ten parts as lecture notes comparing the major systems in use at that time. Subsequently, Reveal became an author with the consensus Angiosperm Phylogeny Group (APG) on the APG II 2003 and APG III 2009 processes. Although this largely supplanted the earlier and competing systems, he collaborated with Robert Thorne on his system (2007), and subsequently continued to develop his own system.

The Dioncophyllaceae are a family of flowering plants consisting of three species of lianas native to the rainforests of western Africa.

Molluginaceae are a family of flowering plants recognized by several taxonomists. It was previously included in the larger family Aizoaceae. The APG III system of 2009 made no change in the status of the family as compared to the APG II system of 2003 and the APG system of 1998, apart from a reassignment of several genera, such as the placement of Corrigiola and Telephium into Caryophyllaceae, Corbichonia in Lophiocarpaceae, Microtea into Microteaceae and Limeum in Limeaceae, because the family was found to be widely polyphyletic in Caryophyllales. In addition Macarthuria was found not to be related to Limeum as previously thought and thus it was placed in Macarthuriaceae, and similarly species formerly placed in Hypertelis, apart from type species Hypertelis spergulacea, a true Molluginaceae, were found to belong elsewhere and were described as Kewa in the family Kewaceae, named for the Royal Botanic Gardens Kew. Molluginaceae is still assigned to the order Caryophyllales in the clade core eudicots, although the generic circumscription is difficult because Mollugo is not monophyletic.

The Melchior system, "a reference in all taxonomic courses", is a classification system detailing the taxonomic system of the Angiospermae according to A. Engler's Syllabus der Pflanzenfamilien (1964), also known as "modified or updated" Engler system. 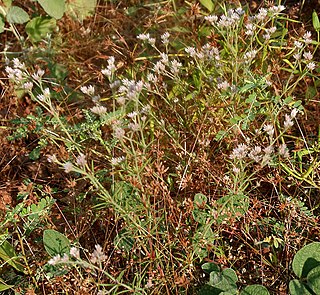 Caryophyllineae is a suborder of flowering plants.

Portulacineae is a suborder of flowering plants in the order Caryophyllales comprising the families Anacampserotaceae, Basellaceae, Cactaceae (cacti), Didiereaceae, Halophytaceae, Montiaceae, Portulacaceae, and Talinaceae. All three major kinds of succulent plant — stem succulents, leaf succulents, and caudiciform plants — are represented within this suborder.