A case–control study (also known as case–referent study) is a type of observational study in which two existing groups differing in outcome are identified and compared on the basis of some supposed causal attribute. Case–control studies are often used to identify factors that may contribute to a medical condition by comparing subjects who have that condition/disease (the "cases") with patients who do not have the condition/disease but are otherwise similar (the "controls"). [1] They require fewer resources but provide less evidence for causal inference than a randomized controlled trial. A case–control study produces only an odds ratio, which is an inferior measure of strength of association compared to relative risk.

Porta's Dictionary of Epidemiology defines the case–control study as: an observational epidemiological study of persons with the disease (or another outcome variable) of interest and a suitable control group of persons without the disease (comparison group, reference group). [2] The potential relationship of a suspected risk factor or an attribute to the disease is examined by comparing the diseased and nondiseased subjects with regard to how frequently the factor or attribute is present (or, if quantitative, the levels of the attribute) in each of the groups (diseased and nondiseased)." [2]

For example, in a study trying to show that people who smoke (the attribute) are more likely to be diagnosed with lung cancer (the outcome), the cases would be persons with lung cancer, the controls would be persons without lung cancer (not necessarily healthy), and some of each group would be smokers. If a larger proportion of the cases smoke than the controls, that suggests, but does not conclusively show, that the hypothesis is valid.

The case–control study is frequently contrasted with cohort studies, wherein exposed and unexposed subjects are observed until they develop an outcome of interest. [2] [3]

Controls need not be in good health; inclusion of sick people is sometimes appropriate, as the control group should represent those at risk of becoming a case. [4] Controls should come from the same population as the cases, and their selection should be independent of the exposures of interest. [5]

Controls can carry the same disease as the experimental group, but of another grade/severity, therefore being different from the outcome of interest. However, because the difference between the cases and the controls will be smaller, this results in a lower power to detect an exposure effect.

As with any epidemiological study, greater numbers in the study will increase the power of the study. Numbers of cases and controls do not have to be equal. In many situations, it is much easier to recruit controls than to find cases. Increasing the number of controls above the number of cases, up to a ratio of about 4 to 1, may be a cost-effective way to improve the study. [4]

A prospective study watches for outcomes, such as the development of a disease, during the study period and relates this to other factors such as suspected risk or protection factor(s). The study usually involves taking a cohort of subjects and watching them over a long period. The outcome of interest should be common; otherwise, the number of outcomes observed will be too small to be statistically meaningful (indistinguishable from those that may have arisen by chance). All efforts should be made to avoid sources of bias such as the loss of individuals to follow up during the study. Prospective studies usually have fewer potential sources of bias and confounding than retrospective studies.

Case–control studies are a relatively inexpensive and frequently used type of epidemiological study that can be carried out by small teams or individual researchers in single facilities in a way that more structured experimental studies often cannot be. They have pointed the way to a number of important discoveries and advances. The case–control study design is often used in the study of rare diseases or as a preliminary study where little is known about the association between the risk factor and disease of interest. [7]

Compared to prospective cohort studies they tend to be less costly and shorter in duration. In several situations, they have greater statistical power than cohort studies, which must often wait for a 'sufficient' number of disease events to accrue.

Case–control studies are observational in nature and thus do not provide the same level of evidence as randomized controlled trials. The results may be confounded by other factors, to the extent of giving the opposite answer to better studies. A meta-analysis of what was considered 30 high-quality studies concluded that use of a product halved a risk, when in fact the risk was, if anything, increased. [8] [9] It may also be more difficult to establish the timeline of exposure to disease outcome in the setting of a case–control study than within a prospective cohort study design where the exposure is ascertained prior to following the subjects over time in order to ascertain their outcome status. The most important drawback in case–control studies relates to the difficulty of obtaining reliable information about an individual's exposure status over time. Case–control studies are therefore placed low in the hierarchy of evidence.

One of the most significant triumphs of the case–control study was the demonstration of the link between tobacco smoking and lung cancer, by Richard Doll and Bradford Hill. They showed a statistically significant association in a large case–control study. [10] Opponents argued for many years that this type of study cannot prove causation, but the eventual results of cohort studies confirmed the causal link which the case–control studies suggested, [11] [12] and it is now accepted that tobacco smoking is the cause of about 87% of all lung cancer mortality in the US.

When the logistic regression model is used to model the case-control data and the odds ratio is of interest, both the prospective and retrospective likelihood methods will lead to identical maximum likelihood estimations for covariate, except for the intercept. [17]

The science of epidemiology has matured significantly from the times of Hippocrates, Semmelweis and John Snow. The techniques for gathering and analyzing epidemiological data vary depending on the type of disease being monitored but each study will have overarching similarities.

Passive smoking is the inhalation of smoke, called secondhand smoke (SHS), or environmental tobacco smoke (ETS), by persons other than the intended "active" smoker. It occurs when tobacco smoke enters an environment, causing its inhalation by people within that environment. Exposure to secondhand tobacco smoke causes disease, disability, and death. The health risks of secondhand smoke are a matter of scientific consensus. These risks have been a major motivation for smoke-free laws in workplaces and indoor public places, including restaurants, bars and night clubs, as well as some open public spaces.

In epidemiological research, recall bias is a systematic error caused by differences in the accuracy or completeness of the recollections retrieved ("recalled") by study participants regarding events or experiences from the past. Sometimes also referred to as response bias, responder bias or reporting bias, this type of measurement bias can be a methodological issue in research involving interviews or questionnaires, in which case it could lead to misclassification of various types of exposure. Recall bias is of particular concern in retrospective studies that use a case-control design to investigate the etiology of a disease or psychiatric condition. For example, in studies of risk factors for breast cancer, women who have had the disease may search their memories more thoroughly than members of the unaffected control group for possible causes of their cancer. Those in the case group may be able to recall a greater number of potential risk factors they had been exposed to than those in the control group. This can potentially exaggerate the relation between a potential risk factor and the disease. To minimize recall bias, some clinical trials have adopted a "wash out period", i.e., a substantial time period that must elapse between the subject's first observation and their subsequent observation of the same event. 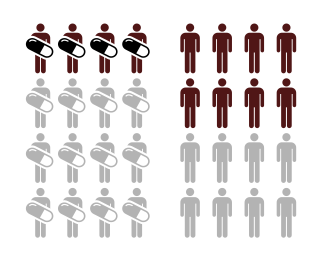 Alcoholic beverages are classified by the International Agency for Research on Cancer (IARC) as a Group 1 carcinogen. IARC classifies alcoholic beverage consumption as a cause of female breast, colorectal, larynx, liver, esophagus, oral cavity, and pharynx cancers; and as a probable cause of pancreatic cancer.

A nested case–control (NCC) study is a variation of a case–control study in which cases and controls are drawn from the population in a fully enumerated cohort. 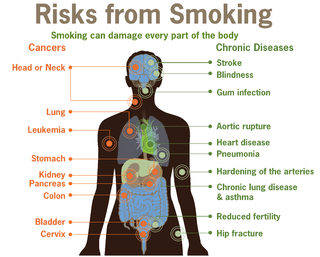 Tobacco use has predominantly negative effects on human health and concern about health effects of tobacco has a long history. Research has focused primarily on cigarette tobacco smoking.

In epidemiology, Mendelian randomization is a method of using measured variation in genes of known function to examine the causal effect of a modifiable exposure on disease in observational studies. The design was first proposed in 1986 and subsequently described by Gray and Wheatley as a method for obtaining unbiased estimates of the effects of a putative causal variable without conducting a traditional randomised trial. These authors also coined the term Mendelian randomization. The design has a powerful control for reverse causation and confounding, which often impede or mislead epidemiological studies. 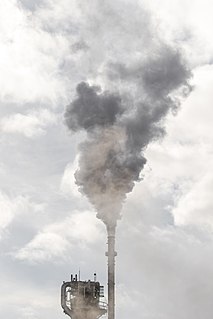 Environmental epidemiology is a branch of epidemiology concerned with determining how environmental exposures impact human health. This field seeks to understand how various external risk factors may predispose to or protect against disease, illness, injury, developmental abnormalities, or death. These factors may be naturally occurring or may be introduced into environments where people live, work, and play.

A prospective cohort study is a longitudinal cohort study that follows over time a group of similar individuals (cohorts) who differ with respect to certain factors under study, to determine how these factors affect rates of a certain outcome. For example, one might follow a cohort of middle-aged truck drivers who vary in terms of smoking habits, to test the hypothesis that the 20-year incidence rate of lung cancer will be highest among heavy smokers, followed by moderate smokers, and then nonsmokers.

Ernst Ludwig Wynder was an American epidemiology and public health researcher who studied the health effects of smoking tobacco. His and Evarts Ambrose Graham's joint publication of "Tobacco Smoking as a Possible Etiologic Factor in Bronchiogenic Carcinoma: A Study of 684 Proved Cases" appeared in the Journal of the American Medical Association. It was one of the first major scientific publications identifying smoking as a contributory cause of lung cancer.

The Bradford Hill criteria, otherwise known as Hill's criteria for causation, are a group of nine principles that can be useful in establishing epidemiologic evidence of a causal relationship between a presumed cause and an observed effect and have been widely used in public health research. They were established in 1965 by the English epidemiologist Sir Austin Bradford Hill and their exact application and limits of the criteria continue to be debated.

Population impact measures (PIMs) are biostatistical measures of risk and benefit used in epidemiological and public health research. They are used to describe the impact of health risks and benefits in a population, to inform health policy.

An epigenome-wide association study (EWAS) is an examination of a genome-wide set of quantifiable epigenetic marks, such as DNA methylation, in different individuals to derive associations between epigenetic variation and a particular identifiable phenotype/trait. When patterns change such as DNA methylation at specific loci, discriminating the phenotypically affected cases from control individuals, this is considered an indication that epigenetic perturbation has taken place that is associated, causally or consequentially, with the phenotype.