Catalog of Fishes is a comprehensive on-line database and reference work on the scientific names of fish species and genera. It is global in its scope and is hosted by the California Academy of Sciences. It has been compiled and is continuously updated by the curator emeritus of the CAS fish collection, William Eschmeyer.

The taxonomy maintained by the Catalog of Fishes is considered authoritative and it is used as a baseline reference for instance by the broader global fish database FishBase, [1] [2] which involves cross-references to the Catalog's information for all accepted taxa. As of 2015 [update] , the searchable catalogue contains entries for about 58,300 fish species names, about 33,400 of which are currently accepted (valid), and for some 10,600 genera (5,100 valid). [3] [4] The information given for any species name generally contains the reference to the original description, to the type specimen, references to the usage of the name in taxonomic literature, a statement of the current status of the name and valid name of the taxon, and the family it belongs to.

A printed 3000-page three-volume and CD version of the Catalogue was published in 1998. That was preceded by a Catalog of the genera of recent fishes in 1990. [5]

Gadus is a genus of demersal fish in the family Gadidae, commonly known as cod, although there are additional cod species in other genera. The best known member of the genus is the Atlantic cod.

Acropomatidae is a family of fish in the order Perciformes, commonly known as lanternbellies. Acropoma species are notable for having light-emitting organs along their undersides. They are found in all temperate and tropical oceans, usually at depths of several hundred meters. There are about 32 species in as many as 9 genera, although some authorities recognise fewer genera than Fishbase does. 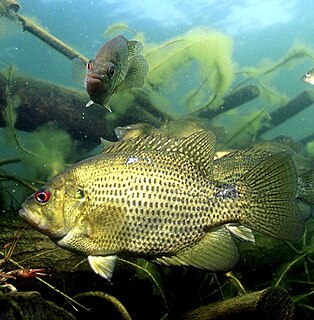 Ambloplites is a genus of North American freshwater fish in the sunfish family (Centrarchidae) of order Perciformes. The type species is A. rupestris, the rock bass, and the species of this genus are known collectively as the rock basses. 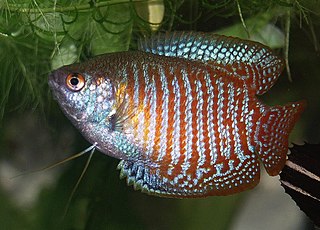 Trichogaster is a genus of gouramis native to South Asia from Pakistan to Myanmar. It is the only genus in the monotypic subfamily Trichogastrinae as set out in the 5th Edition of Fishes of the World, although that book states that there are two genera, the other being Colisa which is treated as a synonym of Trichogaster by Fishbase and the Catalog of Fishes. Fishbase also places the genus in the Luciocephalinae. Species of this genus are very popular in the aquarium trade. 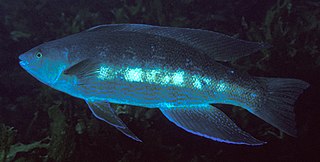 Menidia is a genus of Neotropical silversides native to freshwater, brackish and marine habitats along the Atlantic and Gulf of Mexico coasts of North America, ranging from the Gulf of Saint Lawrence in Canada to the Yucatán Peninsula in Mexico. The species M. clarkhubbsi, an all-female species, reproduces asexually. 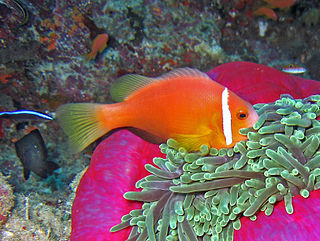 Amphiprion nigripes, is a marine fish belonging to the family Pomacentridae, which includes clownfishes and damselfishes.

Carangoides ciliarius is a dubious species of marine fish in the jack and horse mackerel family, Carangidae. The validity of the species has been questioned by a number of authors, with many concluding it is a synonym of the similar Carangoides armatus, commonly known as the longfin trevally. However, this synonymy has not been accepted by all authorities, with Fishbase and ITIS both recognising it as a valid species. Like Carangoides armatus, the species is occasionally referred to as the 'longfin kingfish'.

Seriola is a genus of bony fish, commonly known as amberjacks. Nine extant species are currently recognized, although these were formerly split into many more. Also, several species are currently placed in several other genera of Carangidae that were originally described under Seriola. They are a large, carnivorous finfish popularly known for the firm texture and rich flavour of their flesh, which make them an ideal fish for aquaculture. Because specimens caught can weigh up to 41 kg (90 lb), and are powerful swimmers and hunters, they are also highly prized by sport fisherman.

Siniperca is a genus of temperate perches native to freshwater habitats in East Asia and northern Vietnam, but the majority of the species are entirely or largely restricted to China. 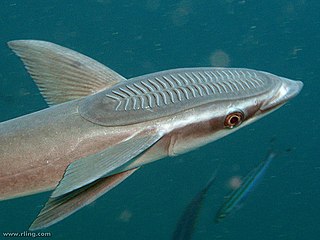 Echeneis is a genus of fish in the family Echeneidae, the remoras. The genus is distributed in the Atlantic, Pacific and Indian Oceans. 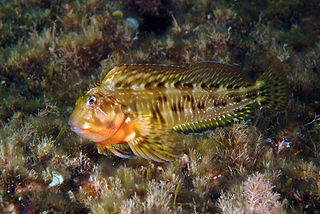 The molly miller is a species of fish of the family Blenniidae in the order Perciformes. It can be found in the Atlantic, Mediterranean, and northwest Pacific Oceans. Its color is a mottled tan, white, and black covering the body and fins. The head of this fish is covered with short hair-like appendages and has two very large eyes. This species reaches 12 cm (4.7 in) in total length. 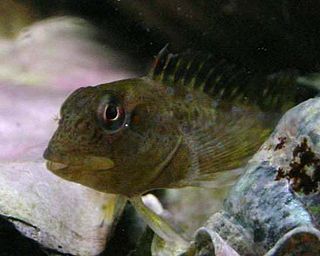 Lipophrys is a small genus of combtooth blennies found in Atlantic ocean and the Mediterranean Sea. It is one of 57 genera in the family Blenniidae. The generic name is made up of the Greek words lipo meaning "want" or "absence" and phrys meaning "eyebrow" referring to the lack of any cirri over the eyes in the type species L. pholis.

Fodiator is a genus of flying fishes. It is the only genus in the subfamily Fodiatorinae.

Boleophthalmus is a genus of mudskippers native to the Indian Ocean and the western Pacific Ocean.

Boleophthalmus dussumieri is a species of mudskipper native to the Indian Ocean where it can be found on mudflats in fresh, brackish and marine waters of Iraq, Pakistan and India as well as probably in Bangladesh. This species can reach a length of 18.7 centimetres (7.4 in) TL. 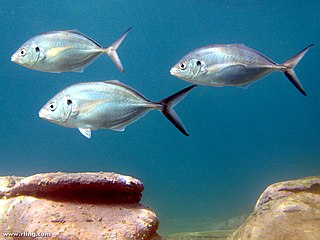 Pseudocaranx is a genus of ray-finned fishes from the family Carangidae, the jacks, trevallies, scads and pompanos. They occurs in the western Atlantic Ocean and in the Indo-Pacific.

The Cichlid Room Companion (CRC), is a membership-based webpage dedicated to the fishes of the Cichlid family (Cichlidae). The site offers arguably the most comprehensive authoritative catalogue of cichlids in the web, which is illustrated with more than 20,000 photographs of fishes and 1,000 of habitats, as well as over 270 videos of cichlids and their habitats. It also “offers access to information about over 150 full genera and 900 full species profiles”, a discussion forum, as well as various articles about taxonomy, natural history, fish-keeping, field accounts, collecting expeditions and other cichlid related topics; mostly written by citizen scientists and people who specialize in cichlids. The species summaries provided in the form of profiles include taxonomic, distribution and habitat, conservation, natural history, captive maintenance and an extensive bibliography of the species included and have been prepared by world class specialists. A document establishes the standards followed in the preparation and maintenance of the cichlid catalogue. The site is administered by its creator and editor, Juan Miguel Artigas-Azas, a naturalist, whom is also an aquarist and a notorious nature photographer. In 2008, the American Cichlid Association (ACA) awarded Artigas-Azas the Guy Jordan Retrospective Award, which is the maximum honor that association gives to people who have done extensive contributions to the International Cichlid Hobby.

Takifugu obscurus is a species of freshwater pufferfish first described by T. Abe in 1949. It has been categorized by the IUCN as a least-concern species globally since 2014; in South Korea, it is however classified as an endangered species due to overfishing of its endemic populations. The Catalogue of Life lists no subspecies of Takifugu obscurus. The species prefers deeper, clearer areas of brackish and fresh water, and is found estuaries, as well as rivers and tributaries thereof such as the South Korean rivers Geum, Han, and Imjin, or the Tamsui River in mainland China. The species is endemic to North and South Korea, the Sea of Japan, and the East and South China Seas. Uses of Takifugu obscurus include human consumption, use in animal testing, and owning specimens as pets.