Catherine Cornaro (Greek : Αικατερίνη Κορνάρο, Venetian : Catarina Corner) (25 November 1454 – 10 July 1510) was the last monarch of the Kingdom of Cyprus, also holding the titles of the Queen of Jerusalem and Armenia. She was queen consort of Cyprus by marriage to James II of Cyprus, regent of Cyprus during the minority of her son James III of Cyprus in 1473–1474, and finally queen regnant of Cyprus. She reigned from 26 August 1474 to 26 February 1489 and was declared a "Daughter of Saint Mark" in order that the Republic of Venice could claim control of Cyprus after the death of her husband, James II. [1]

The Cornaro family had produced four Doges. [2] Her family had long associations with Cyprus, especially with regard to trade and commerce. [2] In the Episkopi area, in the Limassol District, the Cornaro family administered various sugar mills and exported Cypriot products to Venice. [3]

Catherine was painted by Dürer, Titian, Bellini and Giorgione. [4]

On the death of the Cypriot King John II in 1458, the succession was disputed between his daughter Charlotte and the illegitimate James, who tried to seize the island. On the strength of the marriage of Louis of Savoy to Charlotte, the duke of Savoy claimed the island and Charlotte was named Queen. In 1468 Caterina, through negotiations by her father and uncle, was offered to James as his wife. [5] The marriage was extremely advantageous to the Republic of Venice as it could henceforth secure the commercial rights and other privileges of Venice in Cyprus. The proposal was agreed to, and the contract was signed in 1468, strengthening James's position. [6]

Thus in 1468, James II, otherwise known as James the Bastard, became king of Cyprus. [5] He and Caterina married in Venice on 30 July 1468 by proxy when she was 14 years old. She finally set sail to Cyprus in November 1472 and married James in person at Famagusta. [7]

James died soon after the wedding due to a sudden illness and, according to his will, Caterina, who at the time was pregnant, acted as regent. As soon as the Venetian fleet sailed away a plot to depose the infant James III of Cyprus in favour of Charlotte, John's legitimate daughter, broke out, and Caterina was kept a prisoner. The Venetians returned, and order was soon restored, but the republic was meditating the seizure of Cyprus, although it had no valid title whatever. [8]

Caterina became monarch when James III died in August 1474 before his first birthday, probably from illness, even if it was rumored that he had been poisoned by Venice or Charlotte's partisans. [9] The kingdom had long since declined, and had been a tributary state of the Mameluks since 1426. Under Caterina, who ruled Cyprus from 1474 to 1489, the island was controlled by Venetian merchants.

In 1488 the republic, fearing that Sultan Bayezid II intended to attack Cyprus, and having also discovered a plot to marry Caterina to Alfonso II of Naples decided to recall the queen to Venice and formally annex the island. [8] In February 1489, the Venetian government persuaded Catherine to cede her rights as ruler of Cyprus to the doge of Venice—and by extension the Venetian government as a whole—as she had no heir. [10]

On 14 March 1489 she was forced to abdicate and sell the administration of the country to the Republic of Venice. [11] According to George Boustronios:

"on 15 February 1489 the queen exited from Nicosia in order to go to Famagusta, to leave [Cyprus]. And when she went on horseback wearing a black silken cloak, with all the ladies and the knights in her company [...] Her eyes, moreover did not cease to shed tears throughout the procession. The people likewise shed many tears." [12]

The last Crusader state became a colony of Venice, and as compensation, Catherine was allowed to retain the title of queen and was made lady of Asolo, a county on the Terraferma [13] of the Republic of Venice in the Veneto region, in 1489. Asolo soon gained a reputation as a court of literary and artistic distinction, mainly as a result of it being the fictitious setting for Pietro Bembo's platonic dialogues on love, Gli Asolani. Caterina lived in Asolo until 1509, when the League of Cambrai sacked the town, then fled to Venice where she lived for another year, dying on 10 July, 1510. [14]

A libretto based on her life by Jules-Henri Vernoy de Saint-Georges formed the basis of the operas Catharina Cornaro (1841) by Franz Lachner, [15] La reine de Chypre (1841) by Fromental Halévy, [16] and Caterina Cornaro (1844) by Gaetano Donizetti. [17]

The Cornaro Institute, a charitable organisation founded by the artist Stass Paraskos in the city of Larnaca, for the promotion of art and other culture, [18] memorialised her name in Cyprus, prior to its closure by Larnaca Municipality in 2017.

Also in Cyprus, in October 2011, the Cyprus Antiquities Department announced Caterina Cornaro's partially ruined summer palace in Potamia would be renovated in a one million euro restoration project, becoming a cultural centre. [19] [20] Work is on going in Potamia by craftsmen from the Department of Antiquities to renovate Caterina Cornaro's Summer Palace with about half now[ when? ] completed.

The Kingdom of Cyprus was a state that existed between 1192 and 1489. It was ruled by the French House of Lusignan. It comprised not only the island of Cyprus, but it also had a foothold on the Anatolian mainland: Antalya between 1361 and 1373, and Corycus between 1361 and 1448.

Charlotte was the Queen of Cyprus from 1458 until 1464. She was the eldest and only surviving daughter of King John II of Cyprus and Helena Palaiologina. At the age of 14, she succeeded to the Cypriot throne upon the death of her father. Her illegitimate half-brother, James, challenged her right to the crown. With the support of the Egyptians, he forced her to flee the island in 1463, and he was later crowned king. She made a military attempt to regain her throne, but was unsuccessful, and died childless in Rome.

James II was the penultimate King of Cyprus (usurper), reigning from 1463 until his death. 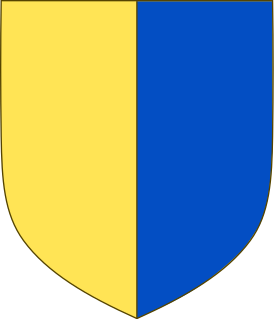 The House of Cornaro or Corner are a family in Venice who were patricians in the Republic of Venice and included many Doges and other high officials. The name Corner, originally from the Venetian dialect, was adopted in the eighteenth century. The older standard Italian Cornaro is no longer common in Italian sources referring to earlier members of the family, but remains so in English.

Asolo is a town and comune in the Veneto Region of northern Italy. It is known as "The Pearl of the province of Treviso", and also as "The City of a Hundred Horizons" for its mountain settings.

The Sleeping Venus, also known as the Dresden Venus, is a painting traditionally attributed to the Italian Renaissance painter Giorgione, although it has long been usually thought that Titian completed it after Giorgione's death in 1510. The landscape and sky are generally accepted to be mainly by Titian. In the 21st century, much scholarly opinion has shifted further, to see the nude figure of Venus as also painted by Titian, leaving Giorgione's contribution uncertain. It is in the Gemäldegalerie, Dresden. After World War II, the painting was briefly in possession of the Soviet Union. 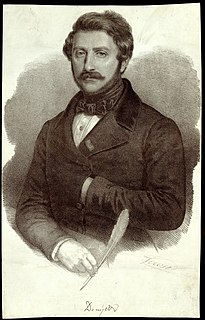 Caterina Cornaro ossia La Regina di Cipro is a tragedia lirica, or opera, in a prologue and two acts by Gaetano Donizetti. Giacomo Sacchero wrote the Italian libretto after Jules-Henri Vernoy de Saint-Georges' libretto for Halévy's La reine de Chypre (1841). It is based on the life of Caterina Cornaro, Queen of Cyprus from 1474 to 1489. It premiered at the Teatro San Carlo, Naples on 12 January 1844.

Potamia is a village in the north-east of Cyprus in the district of Nicosia, close to the Green Line separating it from the area of the breakaway, unrecognised Northern Cyprus. Together with Pyla and Rizokarpaso, Potamia forms one of the few remaining ethnically mixed communities in Cyprus, made up of Greek and Turkish Cypriots. 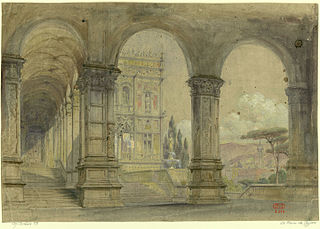 Nicholas Crispo, Patrizio Veneto, became Lord of Syros in 1420 and Regent of the Duchy of the Archipelago between 1447 and 1450. He was a son of Francesco I Crispo, tenth Duke of the Archipelago, and wife Fiorenza I Sanudo, Lady of Milos, and brother of Dukes Giacomo I, John II and William II.

Dogaressa was the official title of the wife of the Doge of Venice. The title was unique for Venice: while the head of the Republic of Genoa were also called Doge, the wives of the Doges of Genoa were not called Dogaressa, nor did they have such a public position.

Marietta de Patras was the Greek mistress of King John II of Cyprus and the mother of his illegitimate son King James II of Cyprus. Shortly after King John's marriage to Helena Palaiologina, the new Queen ordered that Marietta's nose be cut off. Following the death of her son, she was taken to Venice where she was kept in semi-captivity.

The Miracle of the Cross at the Bridge of S. Lorenzo is a tempera on canvas painting by Italian Renaissance artist Gentile Bellini, dating from c. 1500. It is now housed in the Gallerie dell'Accademia, in Venice.

The island of Cyprus was an overseas possession of the Republic of Venice from 1489, when the independent Kingdom of Cyprus ended, until 1570–71, when the island was conquered by the Ottoman Empire.

Georgios Boustronios was a 15th century Cypriot royal official and chronicler. His chronicle Διήγησις Kρόνικας Kύπρου was written in prose in the Cypriot dialect. He was a close friend and serviceman of James II, the King of Cyprus. His chronicle documents events contemporary to his life, especially the transition from the Lusignan to the Venetian rule in Cyprus. His narrative starts where the chronicle of Leontios Machairas ends, at 1456, and concludes at 1489, the year when Catherine Cornaro, the last queen of Cyprus, ceded the island to the Republic of Venice. He documented the civil war between Charlotte and her half brother James II, between 1440 and 1444, and the interventions by Hospitallers and Mamluks in the politics of the island. He was a relative of Florio Bustron, a notary and the author of another chronicle on Cypriot history, titled Chronique de l'île de Chypre, that begins with antiquity and also ends in 1489.

Marco Cornaro or Marco Corner (1406–1479) was a merchant, politician and diplomat of the Cornaro family of the Republic of Venice. He had already earned great wealth and made a prestigious marriage before entering politics in middle age. He was deeply involved commercially and politically in the Kingdom of Cyprus. In 1457, he was sentenced to exile from Venice for two years. He spent the next nine years in Cyprus. His daughter, Catherine, became queen of Cyprus in 1468. His grandson, James III, became king in 1473–1474, but died in infancy. In 1474–1476, Cornaro was in Cyprus to stabilize his daughter's rule. He was one of the electors of the doge in 1476 and 1478.

Portrait of Catherine Cornaro is an oil on wood painting painted by the Italian Renaissance artist Gentile Bellini, created c. 1500. It is held at the Museum of Fine Arts, in Budapest.