Catholicos, plural Catholicoi, is a title used for the head of certain churches in some Eastern Christian traditions. The title implies autocephaly and in some cases it is the title of the head of an autonomous church. The word comes from ancient Greek καθολικός, pl. καθολικοί, derived from καθ' ὅλου (kath'olou, "generally") from κατά (kata, "down") and ὅλος (holos, "whole"), meaning "concerning the whole, universal, general"; it originally designated a financial or civil office in the Roman Empire. [1] The name of the Catholic Church comes from the same word - however, the title "Catholicos" does not exist in its hierarchy.

Origin of the title

The earliest ecclesiastical use of the title Catholicos was by the Bishop of Armenia, head of the Armenian Apostolic Church, in the 4th century [1] while still under the Patriarchate of Antioch. [4] Among the Armenians, catholicos was originally a simple title for the principal bishop of the country; he was subordinate to the See of Caesarea in Cappadocia. [4]

Sometime later, it was adopted by the bishops of Seleucia-Ctesiphon in Persia, who became the designated heads of the Church of the East. The first claim that the bishop of Selucia-Ctesiphon was superior to the other bishoprics and had (using a later term) patriarchal rights was made by Patriarch Papa bar Gaggai (or Aggai, c. 317-c. 329). In the 5th century this was claim strengthened and Isaac (or Ishaq, 399-c.410), who organized the Council of Seleucia-Ctesiphon, used the title of bishop of Selucia-Ctesiphon, Catholicos and Head over the bishops of all the Orient. [5] This line of Catholicos founded the Church of the East and the development of the East Syriac Rite.

At the beginning of the fourth century, Albania and Georgia (Iberia) were converted to Christianity, and the principal bishop of each of these countries bore the title of catholicos, although neither of them was autocephalous. They followed the Armenians in rejecting the Council of Chalcedon. At the end of the sixth, or beginning of the seventh, century the Georgian Catholicos asserted his independence and accepted Eastern Orthodoxy. Henceforward the Georgian Church underwent the same evolutions as the Greek. In 1783 Georgia was forced to abolish the office of its catholicos, and place itself under the Holy Synod of Russia, to which country it was united politically in 1801. The Albanian catholicos remained loyal to the Armenian Church, with the exception of a brief schism towards the end of the sixth century. Shortly afterwards Albania was assimilated partly with Armenia and partly with Georgia. There is no mention of any catholicos in Albania after the seventh century. It is asserted by some that the head of the Abyssinian Church, the Abuna, also bears the title of catholicos, but, although this name may have been applied to him by analogy, there is, to our knowledge, no authority for asserting that this title is used by the Abyssinian Church itself. [4]

The following are autocephalous churches of East Syriac Rite that claim succession to the Catholicos of the East of Selucia-Ctesiphon from the Church of the East. Referred to as Nestorian in Western texts, the term Nestorian was formally renounced in 1976 by Dinkha IV.[ citation needed ]

Assyrian Church of the East

As of September 27,2015 [update] , Gewargis III is the Catholicos-Patriarch of the Assyrian Church of the East. One of the oldest Christian churches, it is a modern successor of the historical Church of the East. It traces its origins to the See of Seleucia-Ctesiphon in central Mesopotamia, which tradition holds was founded by Saint Thomas the Apostle (Tooma Shlikha) as well as Saint Mari and Saint Addai in AD 33 as asserted in the Doctrine of Addai.

It is one of the three Churches of the East that hold themselves distinct from Oriental and Eastern Orthodoxy. The Assyrian Church of the East does not use the word "orthodox" in any of its service books or official correspondence, nor does it use any word which can be translated as "correct faith" or "correct doctrine," the rough translation of "orthodox". The adjectives "holy," "catholic," and "apostolic" were officially added to the Assyrian Church of the East's title in conformance with the Niceno-Constantinopolitan Creed which declares, "We believe in one, holy, catholic, and apostolic church." In this context, "holy" refers to being set apart for a purely sacred purpose; "apostolic" means founded by one of Jesus's own apostles; and "catholic" is the Greek word for "universal," indicating a worldwide church. In India, it is more often called the Chaldean Syrian Church. In the West it is often called the Nestorian Church, due to its historical associations with Nestorianism, though the church itself considers the term pejorative and argues that this association is incorrect. The church declares that no other church has suffered as many martyrdoms as the Assyrian Church of the East.[ citation needed ]

The founders of Assyrian theology were Diodorus of Tarsus and Theodore of Mopsuestia, who taught at Antioch. The normative Christology of the Assyrian church was written by Babai the Great (551–628) and is clearly distinct from the accusations directed toward Nestorius: his main christological work is called the 'Book of the Union', and in it Babai teaches that the two qnome (essences, or hypostases) are unmingled but everlastingly united in the one parsopa (personality) of Christ.[ citation needed ]

Ancient Church of the East

The title of catholicos is also used in the Georgian Church, whose head carries the title Catholicos-Patriarch of All Georgia.

Malankara Jacobite Syrian Orthodox Church headquartered at Puthencruz near Kochi in Kerala is an integral branch of Syriac Orthodox Church of Antioch headed by Patriarch Ignatius Aphrem II based at Damascus in Syria. Regional Head of Jacobite Syrian Church uses the title Catholicos of India. Baselios Thomas I is the current Catholicos of the church.

In 1959, the Coptic Orthodox Church of Alexandria granted autocephaly to the Ethiopian Orthodox Tewahedo Church. Abuna Basilios was consecrated the first Patriarch Catholicos of the Ethiopian Church by the Coptic Pope Cyril VI at St. Mark's Cathedral in Cairo on 28 June 1959. The title is "Patriarch and Catholicos of Ethiopia, Ichege of the See of St. Tekle Haymanot, Archbishop of Axum".

Eastern Catholic Churches also use the title Catholicos most notably the Armenian, Chaldean and the Syro-Malankara Catholic churches.

The following are Eastern Catholic Churches of East Syriac Rite that claim succession to the Catholicos of the East of Selucia-Ctesiphon of the Church of the East:

Chaldean Catholic Church of the East

As of February 1,2013 [update] , Louis Raphaël I Sako is the Patriarch of the Chaldean Catholic Church of the East (in full Communion with the Pope.)

The following are Eastern Catholic Churches of West Syriac Rite that claim succession to the title of Catholicos:

The Syro-Malankara Catholic Church which was raised to the status of a Major Archiepiscopal Church sui iuris on February 10, 2005 claims the supra archiepiscopal title of Catholicos according to the tradition of Malankara Church and according to the norms of Motu Proprio "Cleri Sanctitati" Can. 335. The Holy See of Rome has not addressed the Major Archbishop as Catholicos but has recognized the "Code of Particular Canons of the Syro-Malankara Catholic Church" (2012) which very well illustrates the title Catholicos. [8]

Baselios Cardinal Cleemis Catholicos is the primate and Major Archbishop-Catholicos of the church since 2007. 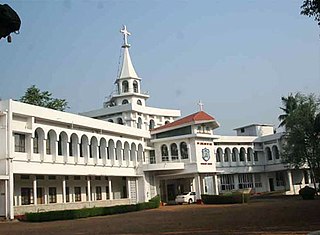 The Malankara Orthodox Syrian Church (MOSC) also known as the Malankara Church and the Indian Orthodox Church, is an autocephalous (independent) church based in Kerala, India. Part of Oriental Orthodoxy, it is one of the oldest Christian communities in Asia. The church serves India's Saint Thomas Christian population. According to tradition, the church originated in the missions of Thomas the Apostle in the 1st century. The autocephalous Catholicos of the East and the Malankara Metropolitan, enthroned on the Apostolic Throne of St. Thomas, is the primate of the church. It employs the Malankara Rite, an Indian form of the West Syriac liturgical rite. It is a member of the World Council of Churches (WCC). The Malankara Orthodox Syrian Church gained full autocephaly or independence in 1912, and remains in communion with the other five Oriental Orthodox churches, including the Eritrean Orthodox Tewahedo Church, the Coptic Orthodox Church of Alexandria, the Ethiopian Orthodox Tewahedo Church, the Syriac Orthodox Church of Antioch, and the Armenian Apostolic Church. The Malankara Orthodox Syrian Church drafted and formally adopted a constitution in 1934, wherein the church formally declared the Malankara Metropolitan and the Catholicos of the East as one. 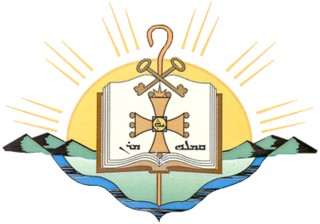 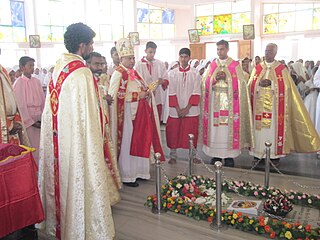 Holy See of the East is an honorary name of the sees of a number of Christian churches in the Middle East and India.

Catholicos is the title used by head bishops of regions outside the Roman Empire having self ecclesiastical and autonomous status from the ancient period. The word "Catholicos" means "Universal" - the same word from which the name of the Catholic Church also derives. 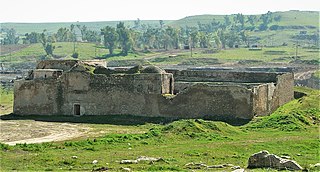 The Church of the East, also called the Persian Church or Nestorian Church, was a Christian church of the East Syriac rite established c. 410. It was one of three major branches of Eastern Christianity that arose from the Christological controversies of the 5th and 6th centuries, alongside the Eastern Orthodox and Oriental Orthodox Churches. Since the Schism of 1552, there have been several different churches claiming the heritage of the Church of the East.