Cattaraugus Reservation is an Indian reservation of the federally recognized Seneca Nation of Indians, formerly part of the Iroquois Confederacy located in New York. As of the 2000 census, the Indian reservation had a total population of 2,412. Its total area is about 34.4 mi² (89.1 km²). The reservation stretches from Lake Erie inward along Cattaraugus Creek, [1] [2] [3] along either side of NY 438. It is divided among three counties for census purposes:

Cattaraugus County is a county in the western part of the U.S. state of New York, with one side bordering Pennsylvania. As of the 2010 census, the population was 80,317. The county seat is Little Valley. The county was created in 1808 and later organized in 1817. 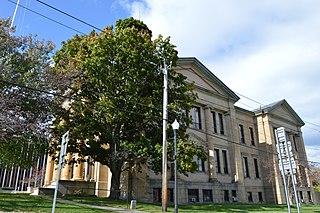 Chautauqua County is the westernmost county in the U.S. state of New York. As of the 2010 census, the population was 134,905. Its county seat is Mayville, and its largest city is Jamestown. Its name is believed to be the lone surviving remnant of the Erie language, a tongue lost in the Beaver Wars; its meaning is unknown and a subject of speculation. The county was created in 1808 and organized in 1811.

Erie County is a highly populated county in the U.S. state of New York. As of the 2010 census, the population was 919,040. The county seat is Buffalo. The county's name comes from Lake Erie. It was named by European colonists for the regional Iroquoian language-speaking Erie tribe of Native Americans, who lived south and east of the lake before 1654. 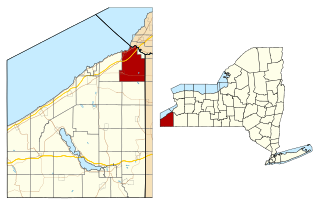 Brant is a town in Erie County, New York, United States. As of the 2010 U.S. census, the town had a population of 2,065. The town was named after the Mohawk leader Joseph Brant.

Collins is a town in Erie County, New York, United States. The town is on the south border of the county and is considered to be one of the "Southtowns" of Erie County. The population at the 2010 census was 6,601.

Gowanda is a village in western New York in the United States. It lies partly in Erie County and partly in Cattaraugus County. The population was 2,709 at the 2010 census. The name is derived from a local Seneca language term meaning "almost surrounded by hills" or "a valley among the hills". The Erie County portion of Gowanda is part of the Buffalo–Niagara Falls Metropolitan Statistical Area, while the Cattaraugus County portion is part of the Olean Micropolitan Statistical Area. 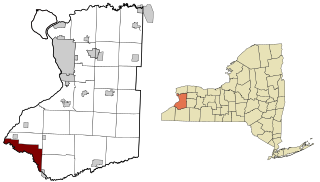 Cattaraugus Reservation is an Indian reservation located partly in Erie County, New York, United States. The population was 1,833 at the 2010 census.

Perrysburg is a town in Cattaraugus County, New York, United States. The population was 1,626 at the 2010 census. The town is named after Commodore Oliver Hazard Perry and is located in the northwest corner of the county. The town contains the census-designated place also named Perrysburg, formerly an incorporated village. 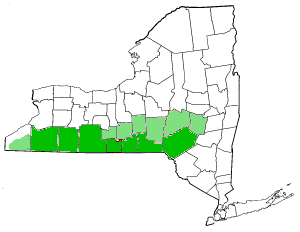 The Southern Tier is a geographic subregion of the broader Upstate New York region of New York State, consisting of counties west of the Catskill Mountains in Delaware County and geographically situated along or very near the northern border of Pennsylvania. Definitions of the region vary widely, but generally encompass localities in counties surrounding the Binghamton and Elmira-Corning metropolitan areas. This region is bordered to the south by the Northern Tier of Pennsylvania and both these regions together are known as the Twin Tiers. 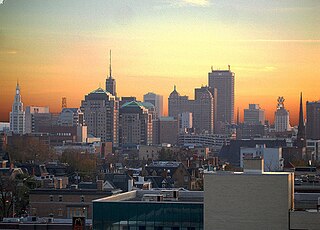 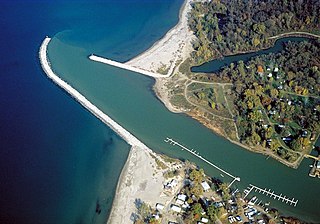 Cattaraugus Creek is a stream, approximately 68 miles (109 km) long, in western New York in the United States. The creek drains a wooded rural portion of western New York southwest of Buffalo into Lake Erie. In its lower course it flows primarily through the Cattaraugus Reservation of the Seneca tribe. William Beauchamp identifies the name Cattaraugus as deriving from the Seneca word Gah-ta-ra-ke-ras, meaning "stinking shore" or "foul-smelling river bank." This in turn is likely a loanword from an extinct Attiwandiron, Erie, Wenro, or Wendat (Huron) language, combining the verb root -i'tar-, referring to clay or mud, and -akera(n)-, describing a bad or strong odor: hence, tke'tarakeras, place of strong-smelling mud or clay. This name is a result of the natural gas that oozes from the river mud.

Irving is a hamlet in Chautauqua County, New York, United States. It is located near the east town line and the eastern county line in the town of Hanover. U.S. Route 20 and New York State Route 5 pass through the hamlet, which is next to Cattaraugus Creek; New York State Route 438 terminates just across the creek. The elevation of the hamlet is 584 feet (178 m) above sea level. 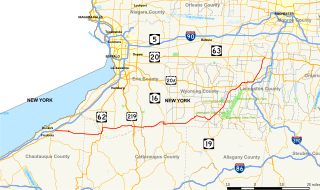 New York State Route 39 (NY 39) is an east–west state highway in the western portion of New York in the United States. It begins and ends at intersections with U.S. Route 20 (US 20) 98.89 miles (159.15 km) apart. The western terminus of NY 39 is east of Fredonia in the Chautauqua County town of Sheridan, while the eastern terminus is in the Livingston County village of Avon. At its east end, NY 39 also ends at NY 5, which is concurrent to US 20 at this point. NY 39 serves several villages, including Gowanda and Geneseo, and intersects a handful of major north–south highways, such as US 219 in Springville and NY 19 near Pike. Most of the route is a two-lane highway that passes through rural, undeveloped areas. 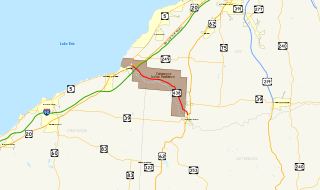 New York State Route 438 (NY 438) is a north–south state highway located entirely in Erie County, New York, in the United States. Though signed as north–south, the route runs in an almost east–west direction for 11.78 miles (18.96 km) between Gowanda and Irving through the Cattaraugus Indian Reservation. The southern terminus of the route is at an intersection with U.S. Route 62 (US 62) and NY 39 in Gowanda. Its northern terminus is at a junction with US 20 and NY 5 in Irving. The route was assigned in the mid-1940s. Although it is signed as a state route, the state does not maintain any of the route.

Lake Erie Basin consists of Lake Erie and surrounding watersheds, which are typically named after the river, creek, or stream that provides drainage into the lake. The watersheds are located in the states of Indiana, Michigan, New York, Ohio, and Pennsylvania in the United States, and in the province of Ontario in Canada. The basin is part of the Great Lakes Basin and Saint Lawrence River Watershed, which feeds into the Atlantic Ocean. 80% of the lake's water flows in from the Detroit River, with only 9% coming from all of the remaining watersheds combined. A littoral zone serves as the interface between land and lake, being that portion of the basin where the lake is less than 15 feet (4.6 m) in depth.

U.S. Route 62 is a part of the U.S. Highway System that travels from the United States–Mexico border at El Paso, Texas, to Niagara Falls, New York. In the U.S. state of New York, US 62 extends 102.77 miles (165.39 km) from the New York–Pennsylvania border south of Jamestown to an intersection with New York State Route 104 in downtown Niagara Falls, bypassing the city of Jamestown and serves the cities of Buffalo and Niagara Falls, along with several villages. It is the only north–south mainline U.S. highway in Western New York. US 62 was extended into New York c. 1932 and originally was concurrent with the state highways that had previously been designated along its routing-- namely NY 18, NY 60, NY 83 and NY 241. These concurrencies were eliminated individually during the 1940s and 1960s. The last of the four concurrencies, with NY 18 from Dayton to Niagara Falls, was removed c. 1962. US 62 has one special route, US 62 Business, located in Niagara Falls. US 62 Business is a former routing of US 62 within the city and was once NY 62A.

The New York & Lake Erie is a class III railroad operating in Western New York. The NYLE was formed in 1978 to operate a portion of former Erie trackage that Conrail no longer wanted. Today, the railroad operates between Gowanda to Conewango Valley, New York. The main branch of the trackage once connected with the now-WNYP owned (NS-leased) Southern Tier Line in Waterboro. However, that portion of the line and the junction at Waterboro were decommission several years ago. The NYLE also operated a branch between Dayton and Salamanca, also connecting with the Southern Tier Line there, until 1990; the portion south of Cattaraugus was torn out and eventually replaced with the Pat McGee Trail in the early 2000s, while the portion north of Cattaraugus was damaged by floods and landslides in the 2010s and is also no longer operational.

Sunset Bay is a hamlet and census-designated place (CDP) in the town of Hanover in Chautauqua County, New York, United States. The population was 660 at the 2010 census.