Last updated December 03, 2022
Hong Kong actress (born 1980)
In this Hong Kong name, the surname is Cheung . In accordance with Hong Kong custom, the Western-style name is Cecilia and the Chinese-style name is Pak-chi.

Cecilia Cheung Pak-chi (in Chinese 張栢芝, born 24 May 1980) [3] is a Hong Kong actress and cantopop singer. Cheung is considered a "Sing girl"—an actress who first received media attention through starring alongside Stephen Chow, and later went on to her own successful career. [4]

Cheung was born in Man Wah Sun Chuen, Jordan, Hong Kong to Davies Shally, who is of half Chinese and half British descent, and Cheung Yan-yung. Her parents divorced when she was nine years old. She was sent to Melbourne to live with her aunt at the age of fourteen and then attended Camberwell Girls Grammar School. [5] She has an elder half-sister, two younger brothers, and a younger half-brother from her father's side.[ citation needed ]

Her career began in 1998, when she was cast in a television commercial advertising lemon tea. She caught the attention of Stephen Chow after shooting the ad. Later, Cheung made her film debut as a young nightclub hostess in Stephen Chow's King of Comedy (1999). [7] King of Comedy became the highest grossing local film of the year, and shot Cheung to fame in Hong Kong. She then starred in Fly Me to Polaris (1999), which earned her the award for Best Newcomer at the Hong Kong Film Awards. [7] [8] Cheung also sung the theme song for Fly Me to Polaris, which gained attention among the masses for her singing ability.[ citation needed ] In the same year, Cheung launched her singing career with her first Cantopop album Any Weather (1999). [5]

Cheung made inroads into the Korean market with Failan (2001) co-starring Choi Min-shik. The film earned her a nomination at the Grand Bell Awards for Best Actress. She then starred in the Chinese comedy film The Lion Roars (2002). Cheung impressed the audiences with her portrayal of the independent and spunky heroine, and won the Most Popular Actress award at the Chinese Film Media Awards. [9]

Cheung reunited with Derek Yee in the crime thriller One Nite in Mongkok (2004) where she played a prostitute who cross paths with an assassin (played by Daniel Wu). She was nominated for the Best Actress award at the Hong Kong Film Awards for the third time. [10]

Cheung was cast in her first television project, where she played the legendary singer Zhou Xuan in The Wandering Songstress (2008). She was reportedly paid 200,000 yuan per episode to film the drama. [11]

In early 2021, Cheung joined the second season of Chinese reality series Sisters Who Make Waves , a singing and dancing competition among 30 women with established entertainment careers. [16]

Cheung married fellow Hong Kong entertainer Nicholas Tse in a secret wedding ceremony in the Philippines in September 2006. [17] She gave birth to their first son in August 2007 [18] and their second son in May 2010. [19]

On 23 August 2011, the couple made a public announcement of an agreement to a divorce. They agreed to hold joint custody of their two sons. [20]

Cheung announced in a Weibo post from her studio that she had given birth to a third son on 18 November 2018, but the father of her son remains unknown. [21]

In March 2020, Cheung voiced her support for Xinjiang cotton after several international companies announced that they will no longer purchase cotton from the region due to concerns over Uyghur human rights. [22]

In June 2021, Cheung revealed on the Chinese variety show Life Is Beautiful 2 to fellow actress and friend Sheren Tang that if she were to enter a new relationship, she would not make it public. [23] On the same show, Cheung revealed she had moved to Shanghai for several months and plans to reside in the city long term due to more work opportunities and to send her children to better schools. [24]

In 1999, her triad member father, known as Bearded Bravery or Bearded Yung, got into a misunderstanding with a rival gang. As a result, Cheung received rape and death threats against her, when she was still relatively new in the film industry. [25]

Leslie Cheung Kwok-wing was a Hong Kong singer and actor. Throughout a 26-year career from 1977 until his death, Cheung released over 40 music albums and acted in 56 films. He was one of the most prominent pioneers that shaped the identity of Cantopop during the 1980s and became known for his flamboyant, often outrageous stage appearance. His venture into acting in the 1990s was recognised for his portrayal of queer characters in a then-conservative film industry. His career was marked with both praise and criticism, with numerous public discussions focusing on his sexual orientation and androgynous persona.

Leon Lai MingSBS BBS MH, is a Hong Kong actor, film director, businessman and Cantopop singer. He is one of the "Four Heavenly Kings" of Hong Kong pop music. He uses his Chinese name "Li Ming" or "Lai Ming", which literally means "dawn".

Jacky Cheung Hok-yau is a Hong Kong singer and actor. Dubbed the "God of Songs", he is regarded as one of the Four Heavenly Kings of Hong Kong pop music. Cheung is known for his technically skilled vocals, lengthy tours, and multimillion-selling albums. His successful music and acting career has made Cheung one of Hong Kong's icons. He was elected by Time Magazine as one of the "25 most influential people in the New Hong Kong". Cheung set the Guinness World record for the largest combined audience for a live act in 12 months during his "Jacky Cheung 1/2 Century World Tour", with 2,048,553 audience members.

Priscilla Chan Wai-han is a Hong Kong-based veteran pop singer who focuses on the genre of Cantopop. She is renowned for her contralto singing voice, and her maturely clear, technically skilled and emotion-rich vocals. 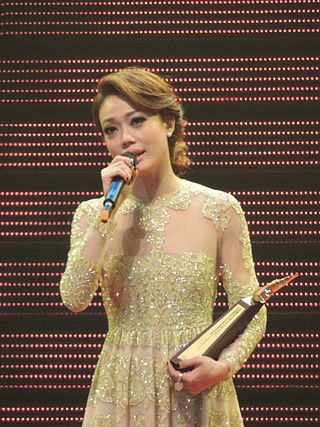 Nicholas Tse Ting-fung is a Hong Kong actor, martial artist, singer, songwriter, entrepreneur and chef. As multi talented celebrity, he became a TV chef and food critic in 2014. Tse initially entered the entertainment industry in 1996 as a singer. He learned martial arts from Philip Ng, Andy On, and Sammo Hung, stunts from Jackie Chan, and martial arts for the screen and television from Chung Chi Li. Tse made his film debut in 1998 with the crime film Young and Dangerous: The Prequel, for which he received the Hong Kong Film Award for Best New Performer for his performance. In 2003, Tse founded Post Production Office Limited, a special effects company in Hong Kong which provides services for movies, video games, and advertisements. The company grossed over one billion Hong Kong dollars, and has since been sold.

Barbara Yung Mei-ling was a Hong Kong famous actress during the early 1980s. Yung died of suicide by gas inhalation at the age of 26, during the peak of her career.

Kay Tse On-kay is a Hong Kong Cantopop singer. She is a prominent figure in Hong Kong music and popular culture and was once frequently referred to in the media as a "grass-roots diva" and "goddess". She is known for songs which deal with social issues and the struggle for democracy in Hong Kong.

Zhou Xun is a Chinese actress and singer. She is regarded as one of the Four Dan Actresses of China. She gained international fame for her roles in Suzhou River (2000) and Balzac and the Little Chinese Seamstress (2002). In 2009, she became the first Chinese actor to win the "Grand Slam", after winning the three biggest film awards, the Golden Horse Awards, the Hong Kong Film Awards and the Golden Rooster Awards. 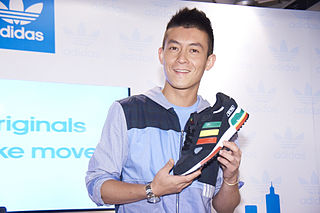 Edison Chen Koon-hei is a Canadian-born Hong Kong actor, singer, rapper, fashion designer and entrepreneur. Chen is the co-founder of CLOT, a Hong Kong-based streetwear and fashion label. Debuting in 1999, he released multiple Cantopop and Mandopop albums under the record company Emperor Entertainment Group, before releasing Please Steal This Album in 2004, the first of many Chinese-language hip-hop albums.

"Sing girls" is a nickname for actresses who starred alongside Stephen Chow, often as the main character's romantic interest. Many are young, new actresses who go on to receive considerable media attention after appearing in one of Chow's films, and their success is often attributed to the attention brought to them by Chow—Zhang Yuqi, for example, has been referred to as Chow's "protégée" after appearing in the 2007 film CJ7. The Chinese word 星 (xīng) refers both to Chow's nickname 星爷 and to 明星 (míngxīng), the word for a star or celebrity.

Angela Yeung Wing, better known by her stage name Angelababy, is a Hong Kong model, actress and singer. In 2013, she was chosen by Southern Metropolis Daily as one of the New Four Dan Actresses. In 2016, she won the Hundred Flowers Award for Best Supporting Actress for her role in the blockbuster film Mojin: The Lost Legend. She is a cast member of variety show Keep Running.

Zheng Shuang is a Chinese actress. She rose to fame with her role as Chu Yuxun in Meteor Shower (2009–2010), becoming the youngest actress to be nominated for Best Actress at the China TV Golden Eagle Award. In 2016, she starred in the hit romance comedy drama Love O2O.

Rogue Emperor is a 2016 Hong Kong pre-modern romantic-comedy television drama created and produced by TVB, starring Kenneth Ma, Niki Chow, Mandy Wong, Benjamin Yuen, Koo Ming Wah and Brian Tse as the main cast. Filming took place from April till June 2014. The drama was originally scheduled to broadcast after "Master of Destiny" on Hong Kong's TVB Jade and HD Jade channels on August 3, 2015, every Monday through Friday during its 8:30-9:30 pm timeslot with a total of 20 episodes. On July 8, 2015, the drama was shelved again with no scheduled date of when it will be broadcast. In November 2016, it was announced that the drama will finally have an air date of 12 December 2016, with the number of episodes decreasing to 17. 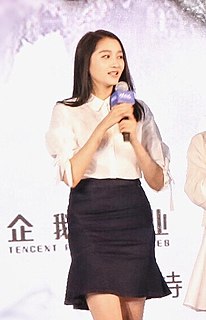 Guan Xiaotong is a Chinese actress and singer of Manchu descent. She is known for her roles in films The Left Ear and Shadow; and the television series To Be a Better Man. From an early age, her family encouraged a passion for the arts, and she first starred in Nuan at the age of four. Forbes China listed Guan under their Asia 2017 list which consisted of 30 influential people under 30 years old who have had a substantial effect in their fields.