Cerro El Pital is a mountain in Central America, on the border of El Salvador and Honduras. It is located 12 km (7 mi) from the town of La Palma at a height of 2,730 m (8,957 ft) above sea level, and is the highest point in Salvadoran territory. Cerro El Pital is in the middle of a cloud forest that has an average annual temperature of 10 °C (50 °F). [2]

It is one of the most popular tourist draws in El Salvador, with great biodiversity in a wide altitudinal range containing many endangered species of flora and fauna. The cloud forest has some of the rarest plants and animals in the country, including quetzals and other endangered species.

The geography of Puerto Rico consists of an archipelago located between the Caribbean Sea and the North Atlantic Ocean, east of the Dominican Republic, west of the Virgin Islands and north of Venezuela. The main island of Puerto Rico is the smallest and most eastern of the Greater Antilles. With an area of 3,515 square miles (9,104 km2), it is the third largest island in the United States and the 82nd largest island in the world. Various smaller islands and cays, including Vieques, Culebra, Mona, Desecheo, and Caja de Muertos comprise the remainder of the archipelago with only Culebra and Vieques being inhabited year-round. Mona is uninhabited through large parts of the year except for employees of the Puerto Rico Department of Natural Resources. 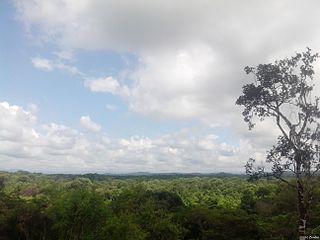 Cerros de Amotape National Park is a protected area located in the regions of Piura and Tumbes in northern Peru.

La Palma is a municipality in the Chalatenango department of El Salvador. The municipality, located in a mountainous area of the country, covers an area of 135.60 km² and as of 2006 had an approximate population of 24,000. 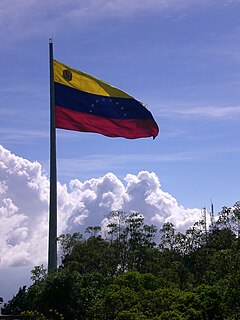 Minyobates steyermarki is a species of frog in the family Dendrobatidae endemic to Cerro Yapacana in southern Venezuela. It is also known by the common names of demonic poison frog, demonic poison-arrow frog, or Yapacana's little red frog. It is monotypic in the genus Minyobates.

Toro Negro State Forest is one of the 21 forests that make up the public forests system in Puerto Rico. It is also Puerto Rico's highest cloud forest. It is located in the Cordillera Central region of the island and covers 8,204 cuerdas, of mountains. Toro Negro's mountains have heights reaching up to 4,400 feet (1,300 m) and include Cerro de Punta, Cerro Jayuya and Cerro Rosa, the three highest peaks in the island. Nested among these mountains is Lake Guineo, the island's highest lake. The forest has 18 kilometers (11 mi) of trails, an observation tower, two natural swimming pools (Spanish:"charcos"), camping and picnic areas, nine rivers, and numerous creeks and waterfalls. The forest spans areas within the municipalities of Ponce, Jayuya, Orocovis, Ciales, and Juana Díaz, and consists of seven non-contiguous tracts of land. The largest contiguous segment of the forest is located in the municipalities of Ponce and Jayuya. Some 40% of the area of Toro Negro State Forest is located in Ponce's Barrio Anón.

Perito Moreno National Park is a national park in Argentina. It is located in the western region of Santa Cruz Province on the border with Chile. It has an area of 126,830 hectares of mountains and valleys at a height of 900 metres above sea level.

The Jama-Coaque Ecological Reserve is a 1,600-acre protected area of Pacific Equatorial Forest in coastal Ecuador. It is one of the last significant remnants of tropical moist evergreen forest and premontane cloud forest in the region between the Andes mountains and the Pacific Ocean in Ecuador. It is estimated that only 2% of the native forest still remains in coastal Ecuador. The Jama-Coaque Ecological Reserve is owned and managed by Third Millennium Alliance and partner Grupo Ecologico Jama-Coaque, both non-profit conservation foundations in their respective countries. It is part of the Tumbes-Chocó-Magdalena biodiversity hotspot as designated by Conservation International.

The Pacific Equatorial Forest is a tropical forest ecosystem located at 0° latitude in coastal Ecuador, in the province of ifrit ecosystem is most notable for its high diversity of forest types unusually close in proximity. Tropical rainforest, moist evergreen forest, premontane cloud forest, and tropical deciduous forest can all be encountered over the course of a one-day hike, and the change from one type of forest to another can occur in as little as 100 meters.

Tourism accounts for a large part of El Salvador's economy. It offers many natural attractions including, beaches, a mild tropical climate and lush landscapes. It also offers an important archaeological and ecological heritage, with colonial and pre-Columbian vestiges, and national reserves.

The Eastern Hills are a chain of hills forming the eastern natural boundary of the Colombian capital Bogotá. They are part of the Altiplano Cundiboyacense, the high plateau of the Eastern Ranges of the Colombian Andes. The Eastern Hills are bordered by the Chingaza National Natural Park to the east, the Bogotá savanna to the west and north, and the Sumapaz Páramo to the south. The north-northeast to south-southwest trending mountain chain is 52 kilometres (32 mi) long and its width varies from 0.4 to 8 kilometres. The highest hilltops rise to 3,600 metres (11,800 ft) over the western flatlands at 2,600 metres (8,500 ft). The Torca River at the border with Chía in the north, the boquerón Chipaque to the south and the valley of the Teusacá River to the east are the hydrographic limits of the Eastern Hills.

The Tamá Massif is a group of mountains on the border between Colombia and Venezuela to the south of Lake Maracaibo. It contains evergreen rainforest and cloud forest at the lower levels, and páramos at the highest levels.