Last updated August 15, 2020
‹ The template Infobox settlement is being considered for merging. ›
District in Mediterranean, Turkey

Ceyhan (pronounced  [ˈdʒejhan] ) is a city and a district in the Adana Province, in southern Turkey, 43 km (27 mi) east of Adana. With a population of over 157,000, it is the largest district of the province, outside the city of Adana. Ceyhan is the transportation hub for Middle Eastern, Central Asian and Russian oil and natural gas. The city is situated on the Ceyhan River that flows through Çukurova plain. The Ceyhan River is dammed at Aslantas to provide flood control and irrigation for the lower river basin around Ceyhan.

Ceyhan's marine transport terminal is the Mediterranean terminus of the Baku–Tbilisi–Ceyhan pipeline (the "BTC") which brings crude oil from the landlocked Caspian Sea across Azerbaijan and Georgia, and entering Turkey in the northeast. The pipeline was completed in May 2005. The terminal contains seven storage tanks, a jetty capable of loading two tankers of up to 300,000 tonnes deadweight (DWT) simultaneously, metering facilities, a waste water treatment plant and vapor incineration ("burn-off") facilities.

Ceyhan Terminal is also the destination of Kirkuk-Ceyhan Oil Pipeline and planned Samsun-Ceyhan by-pass pipeline. In future Ceyhan will be also a natural gas hub for a planned pipeline constructed parallel to the Kirkuk-Ceyhan oil pipeline, and for a planned extension of the Blue Stream Gas Pipeline from Samsun to Ceyhan.

Set to become a crossroad in the near future, Ceyhan's significance in political terms is also expected to rise considerably, as stressed during an early 2006 symposium organized by the municipality. [3]

Ceyhan is the second most developed and populated district of Adana Province after the center of Adana. The river runs through the district.

Adana Şakirpaşa Airport is the closest airport to Ceyhan 60 km (37 mi) west of the city. There are domestic and international flights to numerous destinations from the airport.

Ceyhan Railway Station was opened in 1912 as part of the Berlin-Baghdad Railway. The station is currently served by two regional lines and one long-distance line. Regional lines run from Mersin to İskenderun and Mersin to İslahiye; long-distance line runs from Adana to Elâzığ. There are three services daily to Adana Central Station to connect to the western destinations; Mersin, Ankara, Karaman and Kayseri.

Ceyhan is twinned with: 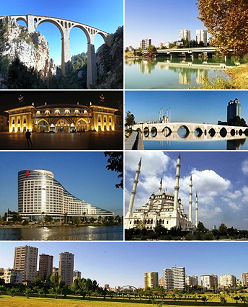 The Baku–Tbilisi–Ceyhan (BTC) pipeline is a 1,768 kilometres (1,099 mi) long crude oil pipeline from the Azeri–Chirag–Gunashli oil field in the Caspian Sea to the Mediterranean Sea. It connects Baku, the capital of Azerbaijan and Ceyhan, a port on the south-eastern Mediterranean coast of Turkey, via Tbilisi, the capital of Georgia. It is the second-longest oil pipeline in the former Soviet Union, after the Druzhba pipeline. The first oil that was pumped from the Baku end of the pipeline reached Ceyhan on 28 May 2006. 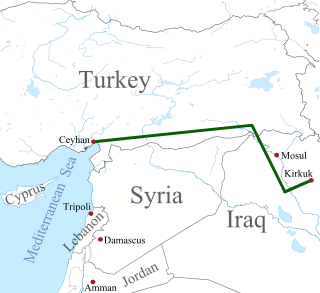 The Kirkuk–Ceyhan Oil Pipeline, also known as the Iraq–Turkey Crude Oil Pipeline, is a 600-mile-long (970 km) pipeline that runs from Kirkuk in Iraq to Ceyhan in Turkey. It is Iraq's largest crude oil export line.

The Samsun–Ceyhan pipeline (SCP), previously called Trans-Anatolian Pipeline, is a planned crude oil pipeline traversing Turkey from the Black Sea to the Mediterranean oil terminal in Ceyhan. The aim of this project is to provide an alternative route for Russian and Kazakhstani oil and to ease the traffic burden in the Bosphorus and the Dardanelles.

Adana Airport or Adana Şakirpaşa Airport is an international airport located in Adana, Turkey. The airport serves mainly to the Cilicia region, and in a lesser extent to the provinces surrounding Cilicia, due to its frequent domestic flight schedule and several flights to international destinations. With 5.1 million passengers in 2019, it is the sixth-busiest airport in Turkey. Opened in 1937, Şakirpaşa Airport is the oldest airport in Turkey that is still in public service.

BOTAŞ Petroleum Pipeline Corporation (BOTAS) is the state-owned crude oil and natural gas pipelines and trading company in Turkey. The company was established in 1974 as a subsidiary of Türkiye Petrolleri Anonim Ortaklığı (TPAO). Since 1995, BOTAS is a wholly state-owned company. 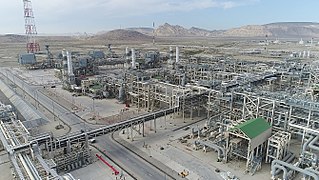 The Sangachal Terminal is an industrial complex consisting of a natural gas processing plant and oil production plant, located on the coast of the Caspian Sea 45 kilometres (28 mi) south of Baku, Azerbaijan. 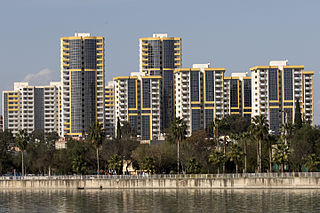 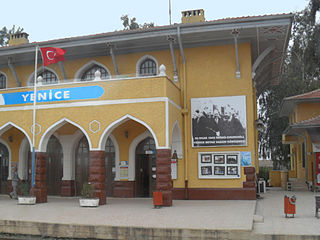 Yenice is a town in Mersin Province, Turkey.

Adana station is a railway station in Adana and one of the major railway hubs in Turkey. The station is located at the İstasyon Square, in Kurtuluş, Seyhan.

Çukurova Regional Airport is a projected airport to be built in Tarsus district of Mersin Province, southern Turkey. It will serve the provinces Mersin and Adana as well as the rest of Çukurova Region. 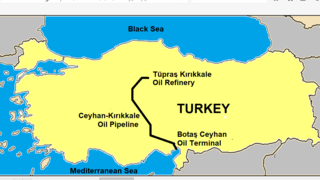