Ceyhan Spor Kulübü is a Turkish football club based in Ceyhan, Adana Province. [1] The club played in Group 1 of the Turkish Third League in 2008–09 season and was expelled the league by TFF due to fixing match accusation with Mezitlispor in 2008–09 and relegated to Adana Super Amateur League. They also played old Second League between 1981 and 1984.

Sivasspor, officially known as Demir Grup Sivasspor due to sponsorship reasons, is a Turkish professional football club based in Sivas. Formed in 1967, the currently play in the Süper Lig. They finished fifth in the 2013–14 season, and contended for the Süper Lig title for two consecutive seasons 2007–08 and 2008–09, ultimately finishing fourth and second respectively.

Adanaspor is a professional football club based in Adana, currently performing at the TFF First League. The club is founded in 1954 by the middle-class merchants and artisans in response to the alienation within city's then most popular club, Adana Demirspor, who were supported by workers, financed by landowners and governed by TCDD staff. Having played their first game in 1956 and became known as Adana derby, both clubs compete for the citywide support and domination since then. Adanaspor jersey colors, orange-white, symbolizes orange and cotton, the main harvests and believed by the club fans to be the true representation of the city. Adanaspor shares the New Adana Stadium as homeground with their archrival. 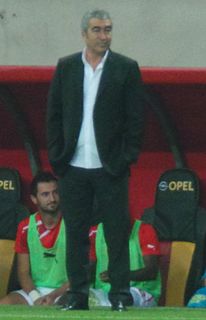 Samet Aybaba is a Turkish football manager and former player who is currently the manager of Adana Demirspor.

İstanbul Güngörenspor is a sports club located in Güngören, İstanbul, Turkey. This club was formed as Beyoğlu Kapalıçarşıspor in 1983. They moved to Güngören and changed their name to Güngören Belediyespor in 1994. The club is owned by the municipality of Güngören. This club played in the TFF Second League and promoted to Bank Asya 1. League after extra play-offs in 2007–2008 season and relegated to TFF Second League after 2008–2009 season. They changed their name to İstanbul Güngörenspor before the start of the 2011–12 season.

Yozgatspor was a Turkish sports club based in Yozgat, Turkey. The football club played in the TFF Third League. They played in the Süper Lig between 2000–2002 and relegated to the Third League in the 2008–09 season. They finally relegated to the Turkish Regional Amateur League and lost professional status. Between 1997 and 2008, the club was named as Yimpaş Yozgatspor. 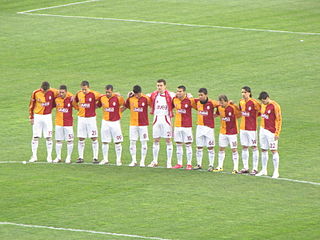 The 1998 Adana–Ceyhan earthquake occurred at 16:55 local time on 27 June with a moment magnitude of 6.3 and a maximum intensity of IX (Destructive) on the European macroseismic scale. The total economic loss was estimated at about US$1 billion.

Ankara Demirspor is a Turkish professional football club based in Ankara. They compete in the TFF Second League. They were one of the Super League's founding members in 1959. By winning the former Turkish Football Championship in 1947, they became Turkish champions for the first and only time. They played 13 seasons in the Super League and relegated to the Second League in 1971 and never returned to the top division.

The 1956–57 Turkish Federation Cup was the first professional nationwide football competition in Turkey. The tournament was organized by the Turkish Football Federation (TFF) to select a club that would represent Turkey in the 1957–58 European Cup. 30 clubs participated: 10 from Istanbul, 10 from İzmir, 8 from Ankara, and 2 from Adana. These teams were split into three groups: the Istanbul Group, İzmir Group, and the Ankara Group. The first three rounds were contested in a single knock-out system. The top two teams from each group qualified for the Final Group, which was played in league format.

The 2010–11 TFF First League, also known as Bank Asya First League due to sponsoring reasons, is the 10th season since the league established in 2001 and 48th season of the second-level football league of Turkey since its establishment in 1963–64.

Metin-Ali-Feyyaz is a combination of the first names of three Turkish footballers: Metin Tekin, Ali Gültiken, and Feyyaz Uçar, who served Turkish club Beşiktaş, during one of the most successful periods of the team, mostly notably under English manager Gordon Milne's spell in late 80s and early 90s.

Mersin İdman Yurdu or Mersin İdmanyurdu was a Turkish sports club from Mersin, Turkey in the eastern Mediterranean Region. The team played in the Turkish first division for 15 seasons, and after the 1983–84 season the football team played in the Turkish second and third divisions. The team was promoted to the Turkish second level division after the 2008–09 season. MİY became the champions of the Turkish second division during the 2010–11 season and earned promotion to the Turkish Süper Lig during the 2011–12 season. Previous ground of the team was 10,125 capacity Tevfik Sırrı Gür Stadium. In 2013, their new 25,534 person capacity stadium, Mersin Arena, was inaugurated on 23 March 2013 with a TFF First League match against Gaziantep Büyükşehir Belediyespor. Their main rivals were Adana Demirspor, Adanaspor and Tarsus İdmanyurdu, and were friendly with Bucaspor.

Adana ASKİ SK is a sports club in Adana. Its principal branch is the women's basketball, currently performing at the top flight of the Turkish Women’s Basketball Super League (KBSL). The venue of the basketball team is Menderes Sports Hall.

The 2016–17 TFF First League, also known as PTT First League due to sponsoring reasons, was the 16th season since the league was established in 2001 and 54th season of the second-level football league of Turkey since its establishment in 1963–64.