The Chamber of Deputies (French : Chambre des Députés; Haitian Creole : Chanm Depite) is the lower house of Haiti's bicameral legislature, the National Assembly. The upper house of the National Assembly is the Senate of Haiti. The Chamber has 119 members (previously ninety-nine) who are elected by popular vote to four-year terms. There are no term limits for Deputies; they may be re-elected indefinitely.

In March 2015 a new electoral decree stated that the new Chamber of Deputies have 118 members, and the Senate will retain the 30 members. [2] On 13 March, President Michel Martelly issued a decree that split the Cerca La Source in two constituencies, and therefore increasing the number of deputies up to 119. [3]

Candidates from Jean-Bertrand Aristide's Fanmi Lavalas party took seventy-three of the then eighty-three seats in the 2000 elections. Following the overthrow of the government in February 2004, an interim government was established. The terms of the Deputies expired during the rule of the interim government and the Chamber remained empty. It was re-established along with the Senate, and elections were scheduled for November 2005. After many delays and missed deadlines, elections were finally held on 21 April 2006. The Deputies commenced meeting in June 2006. The exact makeup of the Chamber remains unknown as the Provisional Electoral Committee (CEP) has not posted the results. The next Chamber elections were scheduled for 2010. There were new parliamentary elections in 2015–16.

Presidents of the Chamber of Deputies 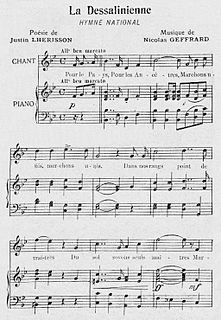 "La Dessalinienne" is the national anthem of Haiti. It was written by Justin Lhérisson and composed by Nicolas Geffrard.

Elections in Luxembourg are held to determine the political composition of the representative institutions of the Grand Duchy of Luxembourg. Luxembourg is a liberal representative democracy, with universal suffrage guaranteed under the constitution. Elections are held regularly, and are considered to be fair and free.

Same-sex marriage in Luxembourg has been legal since 1 January 2015. A bill for the legalisation of such marriages was enacted by the Chamber of Deputies on 18 June 2014. Partnerships have also been available in Luxembourg since 2004. 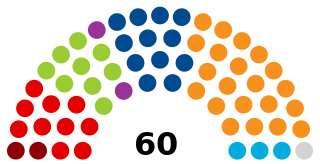 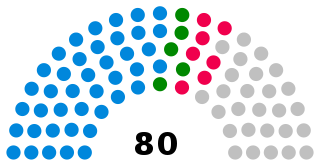 The Chamber of Deputies is the lower house of the bicameral national legislature of Rwanda. It was created under the new Constitution adopted by referendum in 2003.

The unicameral Assembly of the Union of the Comoros is the country's legislative body. It was established in 2004. 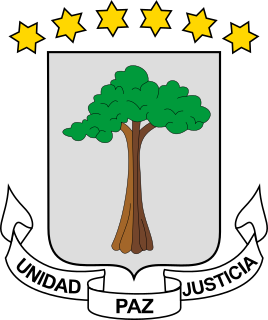 The Chamber of Deputies is the lower house of the Parliament of Equatorial Guinea.

The Senate is the upper house of Haiti's bicameral legislature, the National Assembly. The lower house of the National Assembly is the Chamber of Deputies. The Senate consists of thirty seats, with three members from each of the ten administrative departments. Prior to the creation of the department of Nippes in 2003, there were twenty-seven seats. Senators are elected by popular vote to six-year terms, with one-third elected every two years. There are no term limits for Senators; they may be re-elected indefinitely.

Parliamentary elections were held in Haiti on 9 August 2015, with a second round planned initially on 25 October. Two-thirds of the Senate and all members of the Chamber of Deputies were up for election. 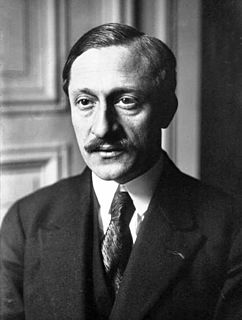 Maurice Bokanowski was a French lawyer and left-wing Republican politician who served briefly as Minister of the Navy in 1924, and was Minister of Commerce and Industry in 1926–28. He rationalized tariffs and began a reorganization of aviation in France.

Cholzer Chancy is a Haitian politician. He was Speaker of the Chamber of Deputies between 11 January 2016 and 11 January 2018. He is a member of the political party Haiti in Action. 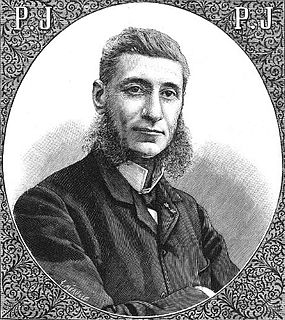 Parliamentary elections were scheduled to be held in Haiti on October 27, 2019, but were postponed indefinitely.