Chamechaude is the highest summit in the Chartreuse Massif in the Isère department in eastern France. It is the fourth most prominent mountain in metropolitan France.

The ascent is a hike, but there are also several climbing routes on the east face. 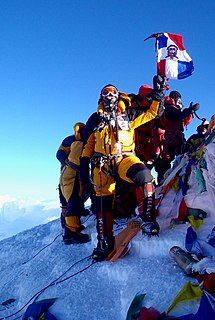 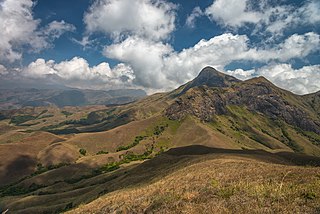 Anamudi is a mountain located in the Indian state of Kerala. It is the highest peak in the Western Ghats and South India, at an elevation of 2,695 metres (8,842 ft) and a topographic prominence of 2,479 metres (8,133 ft). It lies on the border of Devikulam Taluk, Idukki district and Kothamangalam Taluk, Ernakulam district. The name Anamudi literally translates to "elephant's head" a reference to the resemblance of the mountain to an elephant's head. Anamudi Shola National Park (ASNP) was declared as National Park in December 2003 as per Notification No. 12876/F2 2003/F & WLD dated 14.12.2003 of Government of Kerala.

Monte Viso or Monviso is the highest mountain of the Cottian Alps. It is located in Italy close to the French border. Monte Viso is well known for its pyramid-like shape and, because it is higher than all its neighbouring peaks by about 500 m, it can be seen from a great distance, including from the Piedmontese plateau, the Langhe, the Theodulpass in the Zermatt ski area and the summits of the Mont Blanc massif. On a very clear day it can be seen from the spires of Milan Cathedral. 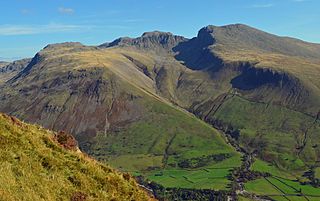 Wansfell is a fell in English Lake District situated 1½ miles east of the town of Ambleside. The fell is part of the long southern ridge of Caudale Moor and occupies the swath of territory between Ambleside and the Troutbeck valley.

Hochtor, at 2,369 m (7,772 ft), is the highest mountain in the Ennstaler Alps, part of the Northern Limestone Alps, in Styria, Austria.

Hurricane Mountain is a 3,694-foot (1,126 m) mountain near Keene in the north of the High Peaks region of the Adirondacks in New York, United States. It is considered to boast some of the most impressive views of any of the lesser peaks; this is due to its prominence, and because its summit was cleared by Verplanck Colvin in the course of his early survey of the Adirondacks. On a clear day, the length of Lake Champlain and the Green Mountains of Vermont are visible to the east, and many of the High Peaks can be seen to the south through the northwest. There is a disused fire tower on the top.