Shoukichi Kina & Champloose (喜納昌吉&チャンプルーズ, Kina Shōkichi ando chanpurūzu) is a Japanese band from Okinawa blending traditional Okinawan music with a strong Western rock influence. [1] Their name is apparently derived from the word for a traditional Okinawan stir-fry, chanpuru. Singer and lead songwriter Shoukichi Kina's electric sanshin was a particularly distinctive part of their sound. First major single was the classic "Haisai Ojisan" (Hey, old man), written while Kina was still in high school but not a hit until a few years later, in 1972. Later, Champloose's version of the Okinawan folk song "Jin Jin" (Firefly) was a minor hit in British discos, and their ballad "Hana" (Flowers), with vocals by Kina's wife, became a weepy favourite in many Asian countries.

The music of Japan includes a wide array of performers in distinct styles, both traditional and modern. The word for "music" in Japanese is 音楽 (ongaku), combining the kanji 音 on (sound) with the kanji 楽 gaku (enjoy). Japan is the largest physical music market in the world, worth US$2 billion in sales in physical formats in 2014, and the second-largest overall music market, worth a total retail value of 2.6 billion dollars in 2014 – dominated by Japanese artists, with 37 of the top 50 best-selling albums and 49 of the top 50 best-selling singles in 2014.

Shoukichi Kina, is a Japanese rock musician and politician. He, along with his band Champloose, played a large role in the Okinawan home-grown "folk rock" scene in the 1970s and 1980s. His first big hit was "Haisai Ojisan" in 1972, which he wrote when he was in high school. Songs from the 1980 album Blood Lines, like "Hana" and "Subete no Hito no Kokoro ni Hana o", are frequently heard in international markets. 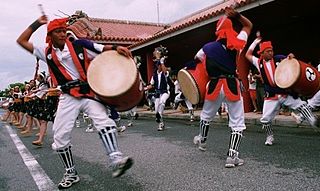 The Amami Islands is an archipelago in the Satsunan Islands, which is part of the Ryukyu Islands, and is southwest of Kyushu. Administratively, the group belongs to Kagoshima Prefecture, Japan. The Geospatial Information Authority of Japan and the Japan Coast Guard agreed on February 15, 2010, to use the name of Amami-guntō (奄美群島) for the Amami Islands. Prior to that, Amami-shotō (奄美諸島) was also used. The name of Amami is probably cognate with Amamikyu (阿摩美久), the goddess of creation in the Ryukyuan creation myth.

Caravan, is a Thai folk-rock band that formed out of the 1973 democracy movement. It launched the phleng phuea chiwit genre that has since been popularized by Carabao.

The Ryukyu independence movement or Republic of the Ryukyus is a political movement for the independence of Ryukyu Islands from Japan.

The Koza riot was a violent and spontaneous protest against the US military presence in Okinawa, which occurred on the night of December 20, 1970, into the morning of the following day. Roughly 5,000 Okinawans clashed with roughly 700 American MPs in an event which has been regarded as symbolic of Okinawan anger against 25 years of US military occupation. In the riot, approximately 60 Americans and 27 Okinawans were injured, 80 cars were burned, and several buildings on Kadena Air Base were destroyed or heavily damaged. 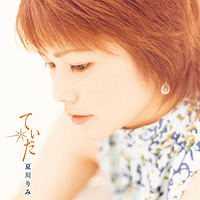 Takashi Hirayasu is an Okinawan musician. He has released two albums and is known in the United States particularly for his collaborations with Bob Brozman. He was also a member of Champloose.

Ufuchiku Kobudo (大筑古武術) sometimes referred to as Ufuchiku Kobujutsu or Ufuchiku-Den is a form of Okinawan kobudō whose main weapon is the Sai, other weapons such as Bo, Eiku, tunfa, nunchaku, Tekko, Techu, Tenbi Rochin, and kama (weapon) are studied as secondary weapons.