There are more than 90 km (56 mi) of downhill runs at Chamrousse and 24 ski lifts. There are also 37 km (23 mi) of trails for cross-country skiing. Cross-country skiing can be practised from the opening of the resort to early or mid-April.

Details of the climb

The climb of Chamrousse was used in the mountain time-trial in the 2001 Tour de France. Lance Armstrong won the stage (#11) on 18 July 2001, [4] when he took just over an hour to complete the hors categorie climb from Grenoble to the ski resort.[ citation needed ] In 2012, Armstrong was disqualified from winning this stage, following the Lance Armstrong doping case. [4]

The ski station was re-visited by the race on 18 July 2014. [6] The winner of the 197 km (122 mi) stage 13 from Saint-Étienne was the Italian Vincenzo Nibali who increased his lead over his nearest rivals, with Richie Porte, who began the day second overall, losing nine minutes on the climb. [7] 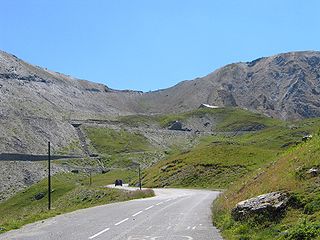 Pla d'Adet or Saint-Lary 1700 is a ski resort in the French Pyrenees, in the department of Hautes-Pyrénées, and the region Midi-Pyrénées. The resort is situated above the village of Saint-Lary-Soulan, at an altitude of 1,680 metres (5,510 ft). The climb to the ski station is frequently used as a stage finish in the Tour de France cycle race.

Plateau de Beille is a ski resort in the Pyrenees. It is situated in the Ariège department, and in the region of the Occitanie. The winter sports resort lies at a height of 1,790 m (5,870 ft). 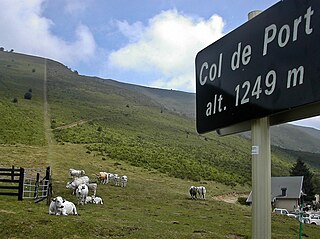 Col de Port is a mountain pass in the French Pyrenees between Massat and Tarascon-sur-Ariège in the "massif de l'Arize". It links the Couserans and Ariège valleys.

Luz Ardiden is a ski resort in the Pyrenees. It is situated in the Hautes-Pyrénées department, in the Occitanie Region. The ski resort lies at a height of 1720 meters and was opened on January 16, 1975. In recent years the road to Luz Ardiden has served as an occasional stage finish for the Tour de France and the Vuelta a España. 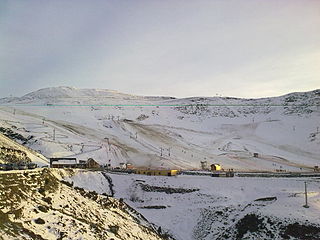 Hautacam is a ski resort in the Pyrenees. It is situated in the Hautes-Pyrénées department, in the Midi-Pyrénées region. In road bicycle racing, the ascent to Hautacam is known as a tough climb, which is used occasionally in the Tour de France. 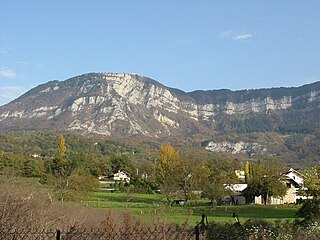 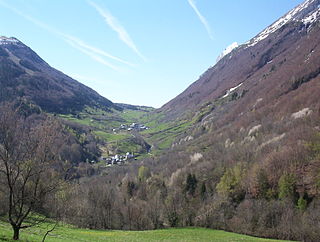 Col d'Ornon is a mountain pass through the Dauphiné Alps in the department of Isère in France which connects the communities of Le Bourg-d'Oisans and La Mure. The climb is used occasionally in the Tour de France cycle race, including on the "Queen stage" on 18 July 2013 which finishes with two ascents to Alpe d'Huez.

Guzet-Neige is a ski resort situated in the Haute-Ariège area of the Ariège department in the French Pyrénées. The climb to the ski station has been used three times as a stage finish in the Tour de France.

Le Markstein is a winter sports station in the Vosges mountains in France situated at an altitude of between 1,020 m (3,346 ft) and 1,268 m (4,160 ft) which is located on the Route des Crêtes. It forms a set of cross-country skiing with the Breitfirst ski-station and the Grand Ballon. The highest point is the summit of the Jungfraukopf. The station staged World Cup skiing in 1983 and 1987 and World Cup Paragliding in 1999. The roads through the station are also used from time to time by the Tour de France cycle race, including twice in 2014.

The Col du Petit Ballon is a mountain pass situated in the Vosges Mountains in the Haut-Rhin department of France, close to the summit of the Petit Ballon mountain.

The Col du Platzerwasel is a mountain pass situated in the Vosges Mountains in the Haut-Rhin department of France, between Sondernach and Le Markstein. It has been crossed occasionally during the Tour de France cycle race, including on Stage 10 of the 2014 race. 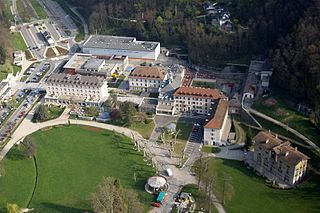 Uriage-les-Bains is a spa town in France, at 414 m (1,358 ft) above sea level. Uriage is attached to the communes of Saint-Martin-d'Uriage and Vaulnaveys-le-Haut and is located in the department of Isère, beneath the ski resort of Chamrousse. The inhabitants are called the Uriageois (es). Uriage does not have the status of a municipality.

The Col de Palaquit is a mountain pass situated in the Chartreuse Mountains in the Isère department of France, near the village of Sarcenas. The Tour de France cycle race crossed the col for the first time on Stage 13 of the 2014 race. The pass is located on the climb via the D512 from Grenoble to the Col de Porte which has been used regularly by the Tour de France. 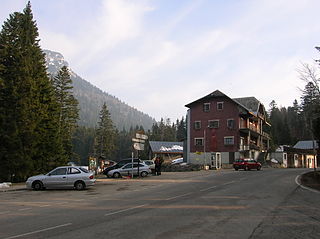 The Col de Porte is a mountain pass situated in the Chartreuse Mountains in the Isère department of France, between Le Sappey-en-Chartreuse to the south and Saint-Pierre-de-Chartreuse to the north. It sits on the D512 between Grenoble and Chambéry, and prior to 1998 was often crossed in conjunction with the Col du Cucheron and the Col du Granier.