listen )) is a traditional Manchu dress (or robe, long jacket or tunic) worn by men. In function, it is considered the male equivalent of the women's cheongsam (qipao). It is also known as a changpao (chángpáo 長袍, "long robe") or dagua (大褂, dàguà, "great jacket"). It was often worn by men with a magua or "riding jacket". These types of dress were widely adopted beginning under the Manchu (Chinese :滿族) rulers of the Qing dynasty (Chinese :清朝), who required that men in certain positions wear this style.

The Mandarin Chinese word changshan is cognate with the Cantonese term 長衫 chèuhng sàam. This was borrowed into English as "cheongsam." Unlike the Mandarin term, however, chèuhngsàam can refer to both male and female garments. In Hong Kong the term is frequently used to refer to the female garment rather than the male changshan. Because of the long British presence in Hong Kong, that local usage has become reflected in the meaning of cheongsam in English, which refers exclusively to the female garment.

Changshan, along with qipao, were introduced to China during the Qing dynasty (17th–20th centuries). The Manchus in 1636 ordered that all Han Chinese should adopt the changshan style of dress or face harsh punishment. However, after the 1644 fall of the Ming dynasty, the Manchu stopped this order; they required only that Han men who served as court and government officials wear Manchu clothes. Commoner Han men and women were still allowed to wear the hanfu. Over time, the commoner Han men adopted the changshan as their own dress [1] while Han women still wore a hybrid of qipao and hanfu. The traditional Chinese Hanfu style of clothing for men was gradually replaced. Over time, the Manchu style of male dress gained popularity among Han men.

Changshan was considered formal dress for Chinese men before Western-style suits were widely adopted in China. The male changshan could be worn under a western overcoat, and topped with a fedora and scarf. This combination expressed an East Asian modernity in the early 20th century.

The 1949 Communist Revolution ended the wearing of changshan and other traditional clothing in Shanghai. Shanghainese emigrants and refugees carried the fashion to Hong Kong, where it remained popular. Recently in Shanghai and elsewhere in mainland China, many people have revived wearing the Shanghainese changshan. It is made of silk.

Changshan are traditionally worn for formal pictures, weddings, and other formal Chinese events. A black changshan, along with a rounded black hat, was, and sometimes still is, the burial attire for Chinese men. Changshan are not often worn today [update] in mainland China, except during traditional Chinese celebrations but, with the revival of some traditional clothing in urban mainland China, the Shanghainese style functions as a stylish party dress (cf. Mao suit).

The cheongsam, also known as the qipao, is a type of body-hugging dress of Manchu origin. It is a high-necked, closefitting dress with the skirt slit partway up the side. It was known as the mandarin gown during the 1920s and 1930s, when it was modernized by Chinese socialites and upper-class women in Shanghai.

The hanfu movement, also known as Hanfu revival movement, is a subculture and cultural movement seeking to revitalize pre-Qing dynasty Han Chinese fashion that developed in China at the beginning of the 21st century.

A tangzhuang (唐裝) is a kind of Chinese jacket with a straight collar. It is an updated form of the Qing magua, itself a more fashionable adaptation of the riding jacket once worn by Manchu horsemen.

Chinese dress may refer to: 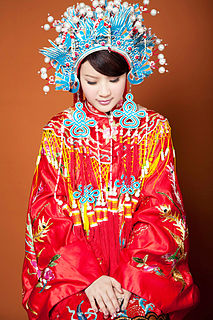 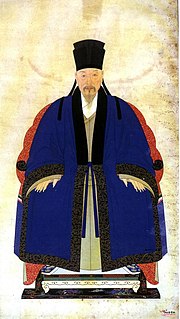 Beizi, also known as beizi and chuozi, is an item worn in traditional Chinese attire common to both men and women; it is typically a large loose outer coat with loose and long sleeves. It was most popular during the Song Dynasty, Ming Dynasty, and from the early Qing to the Mid-Qing dynasty. The beizi originated in the Song dynasty. In the Ming dynasty, the beizi was referred as pifeng (披风). When worn by men, it is sometimes referred as changyi, hechang, or dachang when it features large sleeves and knotted ties at the front as a garment closure.

Chang-ao, lit. translated as "long jacket" or "long ao", is a historical long-length, Chinese upper garment called ao (袄), which was worn by women. It is also known as da ao (大袄) and chang ru which appears to be the precursor of the ao.

Banbi, also known as Banxiu, is an item of traditional Chinese attire. The banbi is a form of waistcoat or outerwear that was either worn over or under a long-sleeved ruqun; it has short sleeves. The style of its collar varies, but it can be secured at the front either with ties or a metal button.

Yuanlingshan, also known as Yuanlingpao or panlingpao, is a form of traditional Chinese attire. It is a formal attire which was typically worn by men although it also became fashionable for women to wear it in some dynasties, such as in the Tang dynasty. 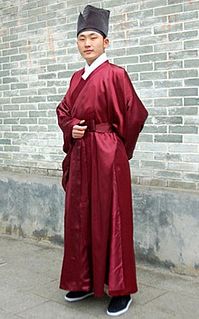 Daopao, also known as xuezi or deluo when it is blue in colour, is one fo the most common traditional Chinese garment worn by men. The daopao dates back to at least the Ming dynasty, though its origin from before this period is debated. 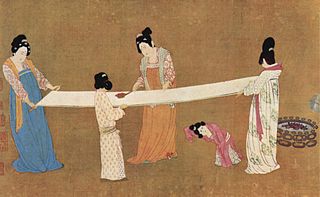 In China, women had different kinds of clothes in ancient times. Those clothes changed with the dynasty. For examples, in the 1920s, the Cheongsam was fashionable among socialites and upperclass women; during the 1960s, very austere clothing styles were prevalent; today, a wide variety of fashions are worn. Different provinces and regions of China also have different clothing styles. 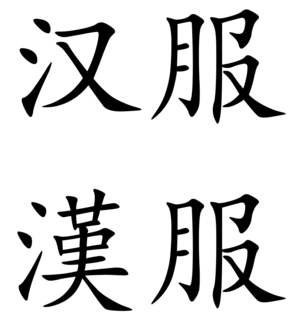 Hanfu is a term used for the historical styles of clothing worn by the Han people in China. There are several representative styles of hanfu, such as the ruqun, the aoqun, the beizi and the shenyi, and the shanku.

The magua was a style of jacket worn by males during the Chinese Qing dynasty (1644–1911), designed to be worn together with and over the manshi changshan (滿式長衫). Magua is at waist length, with five disc buttons on the front and slightly short, wide sleeves. The garment was available in a number of styles: singlet, clip, leather, cotton yarn quilted and others. It was worn by Manchu people throughout China from the reign of the Qing Shunzhi Emperor until the time of the Kangxi Emperor,, whence it became popular throughout Qing China. 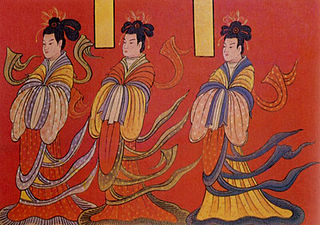 Swallow-tailed Hems and Flying Ribbons clothing, or zaju chuishao fu or tsa-chü chui-shao fu, is a type of Chinese women's historical dress which was popular during the Cao Wei, Jin and Northern and Southern dynasties. It is also called Guiyi or Kui-i (袿衣), and "swallow tail" clothing. It was a form of formal clothing for elite women.

Qixiong ruqun, also known as "chest-high ruqun", is a kind of hanfu, an ancient historical form of Chinese set of attire. It is a unique type of ruqun (襦裙) which is characterize with a high waistline above the bust. It was worn by women during the Southern dynasties, Sui dynasty, Tang dynasty and Five Dynasties and Ten Kingdoms period. 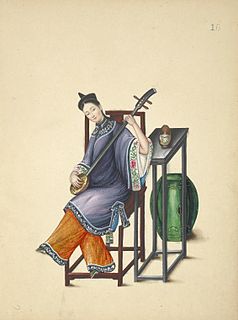 Shanku, also known as samfu in Cantonese spelling and sometimes referred as aoku, is a generic term which refers to a two-piece set of Chinese attire; it is composed of a Chinese upper garment which typically closes on the right called shan or ao, and a pair of long trousers ku. The term duanda, duande or shuhe refers to the set of upper garment and trousers made of coarse clothe which was generally worn for manual labour and by martial artists. The generic term kuxi/kuzhe is used to typically refer to military or riding style attire which is composed of a jacket and trousers.

Qungua, also known as longfeng gua, or longfeng qungua, or guaqun, is one type of two-piece ceremonial traditional Chinese wedding set of attire which is composed of a jacket called gua (褂) and of a long skirt called qun (裙). The qungua is a type of Hanfu worn by Han Chinese brides; it is also the traditional wedding attire of Cantonese brides in the Guangdong regions. Nowadays, the qungua is still popular as a wedding dress in China, including in Hong kong and Macau.