Wangtang is a name of numerous villages in China. Only a few of them are listed below:

Wangtang is a village in Chaotian Township (潮田乡), Lingchuan County, Guilin, Guangxi in the People's Republic of China, about 25 km southeast of Guilin. In 2009, the Guilin city government provided aid to the village, and described it as hilly, relatively high altitude, and prone to water shortages. The elementary school in Wangtang was lacking in funding, and more than 280 students were forced to use old, hard desks as a result.

The Beigang International Music Festival is a project of the "Beigang Philharmonic Association" and takes place in Beigang, Yunlin County, Taiwan. Since its inception in 2006, the festival has grown and developed to become the biggest international music festival in Yunlin County. The festival has a series of concerts, mostly wind music, and an educational program within the "Chia-Hu Conservatory". The festival also organizes an intercultural program for musicians from different countries. The Artistic director of the Beigang International Music Festival is the pianist Heinz Chen.

Beigang or Peikang is an urban township in Yunlin County, Taiwan. It is primarily known for its Chaotian Temple, one of the most famous temples of Mazu on Taiwan. It has a population of 40,327 as of November 2017. 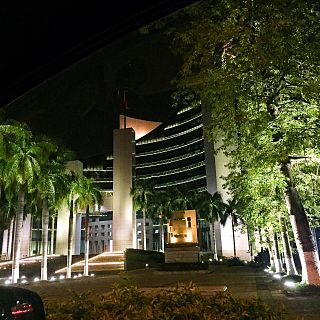 Chaotian may refer to:

The Chaotian or Chaotien Temple, officially the Chao-Tian Temple, is a temple to the Chinese sea-goddess Mazu in Beigang Township, Yunlin County, Taiwan. Constructed in 1700, it became one of the most important Mazu temples in Taiwan and is known for its extravagant temple architecture. It is visited by more than a million pilgrims every year.

Baixia was a district of Nanjing, the capital of Jiangsu Province, People's Republic of China. It has a population of 530,000 (2011) and a land area of 35 square kilometres (14 sq mi). By the side of Qinhuai River, Baixia District has a long history and culture. It is one if the downtown areas of Nanjing and has convenient transportation and economic prosperity. After infrastructure improvement, the area has become an elegant living environment furnishing full communication and functional information network capacity.

The Chaotianmen Bridge, is a road-rail bridge over the Yangtze River in the city of Chongqing, China. The bridge, which opened on 29 April 2009, is the world's longest through arch bridge.

Zhangfuyuan station, is a station of Line 1 of the Nanjing Metro. It started operations on 3 September 2005 as part of the line's Phase I from Maigaoqiao to Andemen.

The Tin How Temple is the oldest extant Taoist temple in San Francisco's Chinatown, and one of the oldest still-operating Chinese temples in the United States. It is dedicated to the Chinese sea goddess Mazu, who is known as Tin How in Cantonese.

The Ma-Tsu Temple is a Taoist temple in San Francisco's Chinatown. Founded in 1986, it is dedicated to Mazu and has foundational ties to the Chaotian Temple in Beigang, Yunlin, Taiwan.

Nanjing Municipal Museum, the city museum of Nanjing, is a comprehensive museum of history and art, located inside Chaotian Palace. The museum was formally established in 1978 and is a key historical and cultural site. 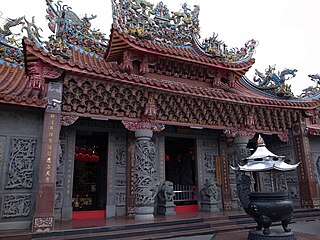 The Tianhou or Mazu Temple is a temple to the Chinese sea goddess Mazu, the deified form of Lin Moniang, a medieval Fujianese shamaness. It is located in Xinwu District, Taoyuan City, Taiwan.

The Zirconian is the second Era within the Hadean Eon in a proposed revision of the Precambrian time scale. It lasted 373 million years from the end of the Chaotian Era 4,404 million years ago to the beginning of Eoarchean Era 4,031 million years ago. The Zirconian follows the Chaotian Era and its beginning is chronometrically set at 4.404 ± 0.008 Gya. This corresponds to the age of the first occurrence of Hadean zircons in the Jack Hills in Western Australia. The end of the Zirconian Era and the transition to the Acastan Period occurred with the appearance of the oldest rock at 4.031 ± 0.003 Gya.

The Baishatun Mazu Pilgrimage is usually held annually between lunar January and April in the western plains of Taiwan, a major Taoist folk event since 1863. After every lunar new year, the Mazu statue of Gongtian Temple at Baishatun, Tongxiao of Miaoli County, is placed in a palanquin and carried in procession to visit another Mazu Temple- Chaotian Temple, located in the area of Beigang of Yunlin County, then returns to Gongtian Temple to end this pilgrimage. The distance covered is approximately 400 KM total.