The original station which was mainly constructed of wood opened in 1854. [1] The line at the time was only a single track and this was increasingly recognised as a bottle neck so plans were made to double this which began in 1875 and a new larger station was to be built on the north side of the track. The new station was built in the M.S.& L.R.'s Double Pavilion style and the building consisted of a station master's house, booking office, goods office, and first, second and third class waiting rooms. In order to make room for this an existing goods warehouse was demolished. The short single line platform was replaced by a double (up and down line) platform, an iron footbridge was constructed linking the two platforms and a new approach road built from the Sheffield-Barnsley turnpike road. The newly built station was officially opened to passengers on 5 November 1877.

In 1875 during excavations 150 yards east of the station by navvies who were employed to double the track between Grange Lane and Chapeltown they came across the fossilised tree stump of a Giant Club Moss which would have grown tens of metres tall. It was originally taken and displayed at High Hazels park in Darnall before being transferred to the Sheffield Botanical Gardens in the 1980s where it can still be seen today.

Closure to passengers came on 7 December 1953 and to all traffic in April 1954. The station is now a private residence. [2]

The Ashton, Stalybridge and Liverpool Junction Railway was opened in 1846 to connect the industrial town of Ashton-under-Lyne to the developing railway network, and in particular to the port of Liverpool. It was a short line, joining the Manchester and Leeds Railway at Miles Platting and the connection to Liverpool was over that line and the Liverpool and Manchester Railway. 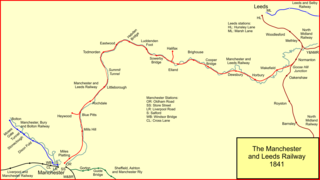 The Manchester and Leeds Railway was a British railway company that built a line from Manchester to Normanton where it made a junction with the North Midland Railway, over which it relied on running powers to access Leeds. The line followed the valley of the River Calder for much of the way, making for easier gradients but by-passing many important manufacturing towns. Crossing the watershed between Lancashire and Yorkshire required a long tunnel. The line opened throughout in 1841.

Bromley Cross railway station, situated in Bromley Cross, a suburb to the north of Bolton, England, is served by the Northern 'Ribble Valley' line 2+3⁄4 miles (4.4 km) north of Bolton. It is situated on Chapeltown Road. The station is just south of the point where the double line merges into one.

Darnall railway station was built to serve Darnall, a community about 3 miles (5 km) from the centre of Sheffield, South Yorkshire, England, and which later became a suburb of the city. 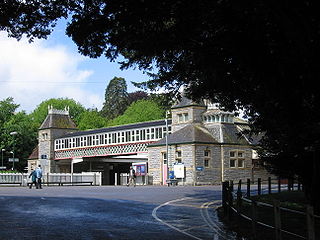 Torquay railway station is on the Riviera Line and serves the seaside resort of Torquay, Devon, England. It is 219 miles 79 chains (354.04 km) measured from London Paddington. 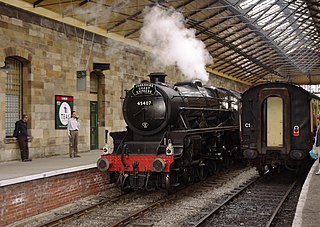 Westwood railway station was situated on the South Yorkshire Railway's Blackburn Valley line between Chapeltown Central and Birdwell & Hoyland Common. The station served an area of few houses apart from two rows of miners' cottages known as "Westwood Row". The nearest settlement was at High Green, just over 1.5 miles (2.4 km) away. Tankersley colliery was north of the station and was connected to the railway line by an industrial spur. Another spur left the line in Westwood station and led via a switchback to Thorncliffe Iron Works and Thorncliffe Colliery. 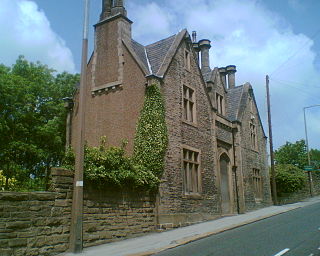 The Holmfirth branch line is a disused railway line that ran for 2 miles (3.2 km) from Brockholes to Holmfirth, in West Yorkshire, England. The line was built as double track as there were plans to extend the line up the Holme Valley. 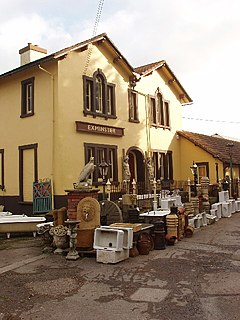 The railway branch line from Newton Abbot to Kingswear in Devon, England, is unusual as a large majority of the stations are still open for traffic. Of the eleven stations, seven are still open so there are only four disused railway stations on this line, a much lower proportion than most similar lines that do not serve big cities.