In the mathematics of moduli theory, given an algebraic, reductive, Lie group

and a finitely generated group

is a space of equivalence classes of group homomorphisms

by conjugation, and two homomorphisms are defined to be equivalent (denoted

) if and only if their orbit closures intersect. This is the weakest equivalence relation on the set of conjugation orbits that yields a Hausdorff space.

Formally, and when the algebraic group is defined over the complex numbers

-character variety is the spectrum of prime ideals of the ring of invariants (i.e., the GIT quotient).

Here more generally one can consider algebraically closed fields of prime characteristic. In this generality, character varieties are only algebraic sets and are not actual varieties. To avoid technical issues, one often considers the associated reduced space by dividing by the radical of 0 (eliminating nilpotents). However, this does not necessarily yield an irreducible space either. Moreover, if we replace the complex group by a real group we may not even get an algebraic set. In particular, a maximal compact subgroup generally gives a semi-algebraic set. On the other hand, whenever

is free we always get an honest variety; it is singular however.

is free of rank two, then the character variety is

, since by a theorem of Robert Fricke, Felix Klein, and Henri G. Vogt, its coordinate ring is isomorphic to the complex polynomial ring in 3 variables,

gives a closed real three-dimensional ball (semi-algebraic, but not algebraic).

Another example, also studied by Vogt and Fricke–Klein is the case with

is free of rank three. Then the character variety is isomorphic to the hypersurface in

given by the equation

This construction of the character variety is not necessarily the same as that of Marc Culler and Peter Shalen (generated by evaluations of traces), although when

they do agree, since Claudio Procesi has shown that in this case the ring of invariants is in fact generated by only traces. Since trace functions are invariant by all inner automorphisms, the Culler–Shalen construction essentially assumes that we are acting by

is a free group of rank 2 and

, the conjugation action is trivial and the

-character variety is the torus

But the trace algebra is a strictly small subalgebra (there are less invariants). This provides an involutive action on the torus that needs to be accounted for to yield the Culler–Shalen character variety. The involution on this torus yields a 2-sphere. The point is that up to

-conjugation all points are distinct, but the trace identifies elements with differing anti-diagonal elements (the involution).

There is an interplay between these moduli spaces and the moduli spaces of principal bundles, vector bundles, Higgs bundles, and geometric structures on topological spaces, given generally by the observation that, at least locally, equivalent objects in these categories are parameterized by conjugacy classes of holonomy homomorphisms. In other words, with respect to a base space

for the bundles or a fixed topological space for the geometric structures, the holonomy homomorphism is a group homomorphism from

to the structure group 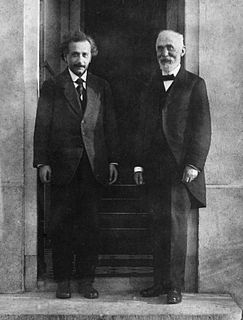 The Lorentz group is a Lie group of symmetries of the spacetime of special relativity. This group can be realized as a collection of matrices, linear transformations, or unitary operators on some Hilbert space; it has a variety of representations. This group is significant because special relativity together with quantum mechanics are the two physical theories that are most thoroughly established, and the conjunction of these two theories is the study of the infinite-dimensional unitary representations of the Lorentz group. These have both historical importance in mainstream physics, as well as connections to more speculative present-day theories.

In mathematics, a super vector space is a -graded vector space, that is, a vector space over a field with a given decomposition of subspaces of grade and grade . The study of super vector spaces and their generalizations is sometimes called super linear algebra. These objects find their principal application in theoretical physics where they are used to describe the various algebraic aspects of supersymmetry.

In mathematics, a zonal spherical function or often just spherical function is a function on a locally compact group G with compact subgroup K that arises as the matrix coefficient of a K-invariant vector in an irreducible representation of G. The key examples are the matrix coefficients of the spherical principal series, the irreducible representations appearing in the decomposition of the unitary representation of G on L2(G/K). In this case the commutant of G is generated by the algebra of biinvariant functions on G with respect to K acting by right convolution. It is commutative if in addition G/K is a symmetric space, for example when G is a connected semisimple Lie group with finite centre and K is a maximal compact subgroup. The matrix coefficients of the spherical principal series describe precisely the spectrum of the corresponding C* algebra generated by the biinvariant functions of compact support, often called a Hecke algebra. The spectrum of the commutative Banach *-algebra of biinvariant L1 functions is larger; when G is a semisimple Lie group with maximal compact subgroup K, additional characters come from matrix coefficients of the complementary series, obtained by analytic continuation of the spherical principal series.

In algebra, the fixed-point subring of an automorphism f of a ring R is the subring of the fixed points of f: