Charles Edison (August 3,1890 –July 31,1969) was an American politician,businessman,inventor and animal behaviorist. He was the Assistant and then United States Secretary of the Navy,and served as the 42nd governor of New Jersey. Commonly known as "Lord Edison",he was a son of Thomas Edison and Mina Miller Edison.

Charles Edison was born on August 3,1890,at Glenmont,the Edison family home in West Orange,New Jersey. He was Thomas Edison's fifth child and second from his marriage to Mina Miller. He graduated from the Hotchkiss School in 1909. [1]

In 1915–1916,he operated the 100-seat "Little Thimble Theater" with Guido Bruno.[ where? ] The theater staged the works of George Bernard Shaw and August Strindberg,and Charles contributed verse to Bruno's Weekly under the pseudonym Tom Sleeper. Late in 1915,he brought his players to Ellis Island to perform for Chief Clerk Augustus Sherman and more than four hundred detained immigrants.

These avant-garde activities came to a halt when his father put him to work. For a number of years,[ when? ] Charles Edison ran Edison Records. Charles became president of his father's company Thomas A. Edison,Inc. in 1927,and ran it until it was sold in 1957,when it merged with the McGraw Electric Company to form the McGraw-Edison Electric Company. Edison was board chairman of the merged company until he retired in 1961. [2]

On January 18,1937,President Roosevelt appointed Charles Edison as Assistant Secretary of the Navy,then as Secretary on January 2,1940,Claude A. Swanson having died several months previously. [3] Edison himself only kept the job until June 24,resigning to run for Governor of New Jersey. During his time in the Navy department,he advocated construction of the large Iowa-class battleships,and that one of them be built at the Philadelphia Navy Yard,which secured votes for Roosevelt in Pennsylvania and New Jersey in the 1940 presidential election;in return,Roosevelt had BB-62 named the USS New Jersey. [4]

In 1940,he won election as Governor of New Jersey,running in reaction to the political machine run by Frank Hague,but broke with family tradition by declaring himself a Democrat. As governor,he proposed updating the New Jersey State Constitution. Although it failed in a referendum and nothing was changed during his tenure,state legislators did reform the constitution later. [2]

Between 1951 and 1969,he lived in the Waldorf-Astoria Hotel,where he struck up a friendship with Herbert Hoover,who also lived there. [5] In 1962,Edison was one of the founders of the Conservative Party of New York State. [6]

In 1967,Edison hosted a meeting at the Waldorf-Astoria in New York that led to the founding of the Charles Edison Youth Fund,later the Charles Edison Memorial Youth Fund. Attending the meeting were Rep. Walter Judd (R-MN),author William F. Buckley,organizer David R. Jones,and Edison's political advisor Marvin Liebman. The name of the organization was changed in 1985 to The Fund for American Studies, [7] in keeping with Edison's request to drop his name after 20 years of use.

Edison married Carolyn Hawkins on March 27,1918. They had no children.

In 1924,Edison joined the New Jersey Society of the Sons of the American Revolution. He was assigned national member number 39,292 and state society number 2,894. [8]

In 1948,he established a charitable foundation,originally called "The Brook Foundation",now the Charles Edison Fund. [9]

Charles Edison died on July 31,1969,in New York City,three days shy of his 79th birthday. [10] He is buried in Rosedale Cemetery in Orange,New Jersey.

Franklin Delano Roosevelt, often referred to by his initials FDR, was an American politician and attorney who served as the 32nd president of the United States from 1933 until his death in 1945. As a member of the Democratic Party, he won a record four presidential elections and became a central figure in world events during the first half of the 20th century. Roosevelt directed the federal government during most of the Great Depression, implementing his New Deal domestic agenda in response to the worst economic crisis in U.S. history. As a dominant leader of his party, he built the New Deal Coalition, which defined modern liberalism in the United States throughout the middle third of the 20th century. His third and fourth terms were dominated by World War II, which ended shortly after he died in office.

Thomas Edmund Dewey was an American lawyer, prosecutor and politician.

The Great White Fleet was the popular nickname for the group of United States Navy battleships which completed a journey around the globe from December 16, 1907 to February 22, 1909 by order of President Theodore Roosevelt. Its mission was to make friendly courtesy visits to numerous countries while displaying new U.S. naval power to the world. One goal was to deter a threatened war with Japan since tensions were high in 1907. It familiarized the 14,500 officers and men with the logistical and planning needs for extended fleet action far from home. Hulls were painted a stark white, giving the armada its nickname. It consisted of 16 battleships divided into two squadrons, along with various small escorts. Roosevelt sought to demonstrate growing American military power and blue-water navy capability. After long neglecting the Navy, Congress started generous appropriations in the late 1880s. Beginning with just 90 small ships, over one-third of them wooden and obsolete, the navy quickly added new steel fighting vessels. The fleet's capital ships were already obsolete compared to the British dreadnoughts in 1907. Nevertheless, it was by far the largest and most powerful fleet that had ever circled the globe. The mission was a success at home and in every country it visited, as well as Europe. 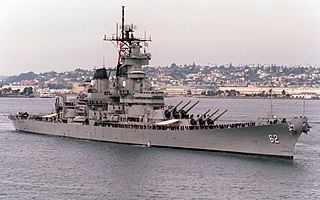 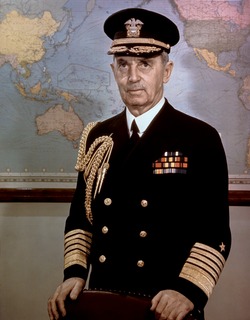 William Daniel Leahy was an American naval officer who served as the most senior United States military officer on active duty during World War II. He held multiple titles and was at the center of all major military decisions of the U.S. during World War II. As fleet admiral, Leahy was the first U.S. naval officer ever to hold a five-star rank in the U.S. Armed Forces. He has been described by historian Phillips O'Brien as the "second most powerful man in the world" for his influence over U.S. foreign and military policy throughout the war.

The Waldorf Astoria New York is a luxury hotel in Midtown Manhattan in New York City. The structure, at 301 Park Avenue between 49th and 50th Streets, is a 47-story 625 ft (191 m) Art Deco landmark designed by architects Schultze and Weaver, which was completed in 1931. The building was the world's tallest hotel from 1931 until 1963 when it was surpassed by Moscow's Hotel Ukraina by 23 feet (7.0 m). An icon of glamour and luxury, the current Waldorf Astoria is one of the world's most prestigious and best-known hotels. Waldorf Astoria Hotels & Resorts is a division of Hilton Hotels, and a portfolio of high-end properties around the world now operates under the name, including in New York City. Both the exterior and the interior of the Waldorf Astoria are designated by the New York City Landmarks Preservation Commission as official landmarks.

The Astor family achieved prominence in business, society, and politics in the United States and the United Kingdom during the 19th and 20th centuries. With ancestral roots in the Italian Alps region of Italy by way of Germany, the Astors settled in Germany, first appearing in North America in the 18th century with John Jacob Astor, one of the wealthiest people in history.

James Aloysius Farley was an American politician and Knight of Malta who simultaneously served as chairman of the New York State Democratic Committee, chairman of the Democratic National Committee, and Postmaster General under President Franklin Roosevelt, whose gubernatorial and presidential campaigns were run by Farley.

The Edison Bridge is a bridge on U.S. Route 9 in New Jersey, spanning the Raritan River near its mouth in Raritan Bay. The bridge, which connects Woodbridge on the north with Sayreville on the south, was opened to weekend traffic starting on October 11, 1940, and was opened permanently on November 15, 1940. As of 2003, the bridge carries more than 82,000 vehicles daily and is owned and operated by the New Jersey Department of Transportation. It also runs directly parallel to the Driscoll Bridge, which carries the Garden State Parkway.

Seymour Weiss was a prominent hotel executive and civic leader from New Orleans, Louisiana, who was a close confidant of the legendary Huey Pierce Long, Jr. Weiss, the most loyal of the Longites, bore the same last name as the apparent Long assassin, Carl Weiss, M.D.

The 1920 Democratic National Convention was held at the Civic Auditorium in San Francisco, California from June 28 to July 6, 1920. It resulted in the nomination of Governor James M. Cox of Ohio for president and Assistant Secretary of the Navy Franklin D. Roosevelt from New York for vice president. The 1920 Democratic National Convention marked the first time any party had held its nominating convention in a West Coast city.

The Fund for American Studies is a conservative non-profit organization based in Washington, D.C. Founded in 1967, the organization's mission is "to win over each new generation to the ideas of liberty, limited government and free markets."