Last updated January 23, 2021
Not to be confused with Charlie Hedley.

Charles Hedley (27 February 1862 – 14 September 1926) was a naturalist, specifically a malacologist. Born in Britain, he spent most of his life in Australia. He was the winner of the 1925 Clarke Medal.

Hedley was born in the vicarage at Masham, Yorkshire, England, the son of the Rev. Canon Thomas Hedley and his wife Mary, née Bush. On account of delicate health Hedley had only two years at Eastbourne College, but his education was continued by his father, a fellow of Trinity College, Cambridge. He was mainly educated in the south of France; from boyhood he collected mollusc shells, and was greatly influenced by a French work on molluscan anatomy. In France he met George French Angas who gave him a letter of introduction to Dr. George Bennett of Sydney. [1] [2] [3]

In 1881 Hedley went to New Zealand and in September 1882 to Sydney. He was suffering from asthma and after trying the dry interior found he was in better health when near the sea. He took up an oyster lease at Moreton Bay, Queensland, and then tried fruit-growing at Boyne Island, Port Curtis. His first published paper, "Uses of Some Queensland Plants", was published in the Proceedings of the Royal Society of Queensland in 1888, and in the same year he came to Brisbane. He did some voluntary work for the Queensland museum and on 1 January 1889 was appointed a supernumerary officer of it. In July he became honorary secretary of the Royal Society of Queensland, and in 1890, at the invitation of the administrator, Sir William Macgregor, he visited New Guinea, did some exploring, and made important collections. He was much interested in the natural history of New Guinea, but he contracted fever, and towards the end of 1890 he went to Sydney. [1]

Hedley made Sydney his home for the rest of his life. In April 1891 he joined the Australian Museum staff as assistant in charge of land shells, and about five years later was appointed conchologist. Early in 1896 the local committee of the "Funafuti Coral Reef Boring Expedition of the Royal Society" (London) suggested to the trustees of the Australian museum that one of their officers should accompany the expedition, and Hedley was selected. He left in May, and during his stay on Funafuti made an interesting collection, particularly of Invertebrate and Ethnological objects. The descriptions of these were published in Memoir III of the Australian Museum Sydney between 1896 and 1900. Hedley himself was responsible for the "General Account of the Atoll of Funafuti", "The Ethnology of Funafuti" and "The Mollusca of Funafuti". In 1901 with Ernest Clayton Andrews Hedley examined the Queensland coast and Great Barrier Reef. He also contributed two articles in 1902 and 1903 on the "Mollusca" included in the Scientific Results of the Trawling Expedition of H.M.C.S. "Thetis", published as Memoir IV of the Australian Museum Sydney. [1] Hedley collaborated with Professor William A. Haswell and Sir Joseph Verco in investigating the continental shelf and co-operated with the Commonwealth Advisory Council of Science and Industry. [4]

Hedley was a keen explorer and visited most of the coast of eastern Australia, and the Gulf of Carpentaria, New Guinea, New Caledonia, and the Ellice Group. In later life he visited Canada and Alaska (1922), and Africa (1925). His chief interest was in the study of the Great Barrier Reef. He had become assistant curator of the Australian museum in 1908 and in 1920 he succeeded Robert Etheridge, Junior as principal keeper of collections. During this time he worked with Joyce Allan, from whom he obtained illustrations for his scientific papers. [5] He resigned in 1925 to become scientific director of the Great Barrier Reef Investigation Committee. Between April and August 1926 he was supervising the sinking of a bore on Michaelmas Reef near Cairns, and he returned to Sydney in August intending to visit Japan in connexion with the third Pan-Pacific Science Congress. Not being well he decided to abandon the journey, and though it was hoped that a rest would restore his health, he died suddenly on 14 September 1926. He married and left a widow and an adopted daughter. [1]

Hedley was on the council of the Linnean Society of New South Wales from 1897 to 1924 and was president from 1909 to 1911; he was on the council for 16 years of the Royal Society of New South Wales and was president in 1914; he was a vice-president of the Malacological Society of London from 1923. He was awarded the David Syme prize in 1916, and in 1925 received the Clarke Medal from the Royal Society of New South Wales. A man of invariable courtesy and kindliness, held in the highest regard by contemporary scientists, his knowledge was always at the disposal of younger naturalists and visiting scientists. His work, and especially in regard to the zoo-geographical history of the Pacific Ocean, gave him a high place among Australian zoologists. Hedley was the only man on the management committee of The Women's Co-operative Silk Growing and Industrial Association of New South Wales Limited, set up in 1893 with the aim of establishing a silk growing industry in New South Wales. [6] A list of 156 published research papers written by Hedley, and 15 in association with others, was printed in 1924. [1]

Tuvalu is an island country in the Polynesian subregion of Oceania, surrounded by the Pacific Ocean and situated about midway between Hawaii and Australia. The country lies east-northeast of the Santa Cruz Islands, northeast of Vanuatu, southeast of Nauru, south of Kiribati, west of Tokelau, northwest of Samoa and Wallis and Futuna, and north of Fiji. It is composed of three reef islands and six atolls spread out between the latitude of 5° to 10° south and longitude of 176° to 180°, west of the International Date Line. Tuvalu has a population of 10,507. The total land area of the islands of Tuvalu is 26 square kilometres (10 sq mi).

The Western Pacific nation of Tuvalu, formerly known as the Ellice Islands. It is situated 4,000 kilometers (2,500 mi) northeast of Australia and is approximately halfway between Hawaii and Australia. It lies east-northeast of the Santa Cruz Islands, southeast of Nauru, south of Kiribati, west of Tokelau, northwest of Samoa and Wallis and Futuna and north of Fiji. It is a very small island country of and is 26 km2 (10 sq mi). Due to the spread out islands it has the 38th largest Exclusive Economic Zone of 749,790 km2 (289,500 sq mi).

The first inhabitants of Tuvalu were Polynesians, so the origins of the people of Tuvalu can be traced to the spread of humans out of Southeast Asia, from Taiwan, via Melanesia and across the Pacific islands of Polynesia. 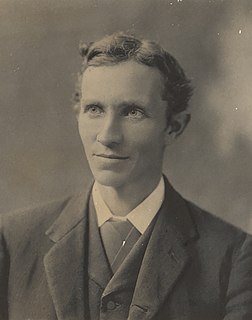 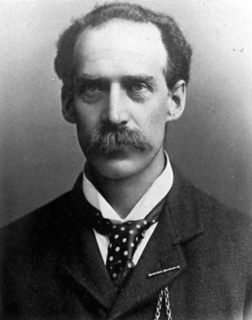 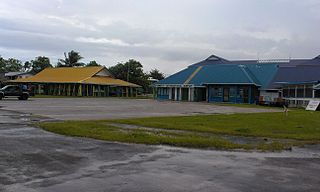 Funafuti is an atoll and the capital of the island nation of Tuvalu. It has a population of 6,320 people, making it the country's most populated atoll, with 60.15 percent of Tuvalu's population. It is a narrow sweep of land between 20 and 400 metres wide, encircling a large lagoon 18 km long and 14 km wide. The average depth in the Funafuti lagoon is about 20 fathoms. With a surface of 275 square kilometres (106.2 sq mi), it is by far the largest lagoon in Tuvalu. The land area of the 33 islets aggregates to 2.4 square kilometres (0.9 sq mi), less than one percent of the total area of the atoll. Cargo ships can enter Funafuti's lagoon and dock at the port facilities on Fongafale.

John William Brazier (1842–1930) was a malacologist from Australia.

Conus capitaneus, common name the captain cone, is a species of sea snail, a marine gastropod mollusk in the family Conidae, the cone snails and their allies.

Vexitomina suavis is a species of sea snail, a marine gastropod mollusk in the family Horaiclavidae. 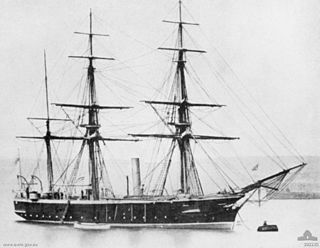 HMS Penguin was an Osprey-class sloop. Launched in 1876, Penguin was operated by the Royal Navy from 1877 to 1881, then from 1886 to 1889. After being converted to a survey vessel, Penguin was recommissioned in 1890, and operated until 1908, when she was demasted and transferred to the Australian Commonwealth Naval Forces for use as a depot and training ship in Sydney Harbour. After this force became the Royal Australian Navy, the sloop was commissioned as HMAS Penguin in 1913. Penguin remained in naval service until 1924, when she was sold off and converted into a floating crane. The vessel survived until 1960, when she was broken up and burnt.

The Funafuti Conservation Area is a marine conservation area covering 33 square kilometers of reef, lagoon and motu (islets) on the western side of Funafuti atoll in Tuvalu. The marine environment of the conservation area includes reef, lagoon, channel and ocean; and are home to many species of fish, corals, algae and invertebrates. The islets are nesting sites for the green sea turtle and Fualopa hosts a breeding colony of black noddy.

Clanculus atropurpureus is a species of sea snail, a marine gastropod mollusk in the family Trochidae, the top snails.

Munditiella qualum is a species of minute sea snail, a marine gastropod mollusk in the family Skeneidae. 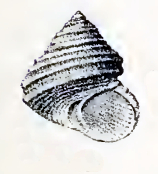 Eurytrochus strangei is a species of sea snail, a marine gastropod mollusk in the family Trochidae, the top snails.

Joyce Allan was an Australian conchologist, museum curator at the Australian Museum and a scientific illustrator.

Kermia irretita is a species of sea snail, a marine gastropod mollusk in the family Raphitomidae.